Ori and the Will of the Wisps | Complete Boss Guide: Foul Presence (Escape) 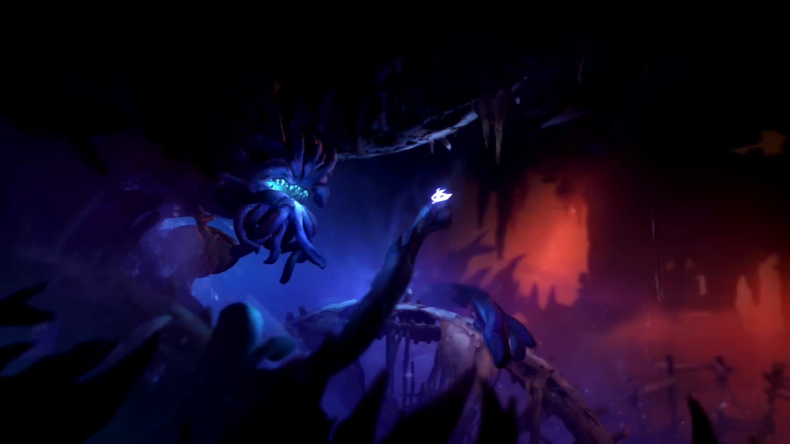 The first proper escape sequence in Ori and the Will of the Wisps comes courtesy of the Foul Presence. When you’ve reached the peak of the Watermill, you’ll find Opher searching the Library there. He’ll tell you of the Foul Presence and asks you to investigate for him. A little further in, you are grabbed by the Foul Presence and seemingly unable to escape. Thankfully Opher comes to your rescue and frees you from its grasp momentarily. That is just the start of your problems though, as now you must escape from its relentless chasing.

A note on Escapes

Escapes in Ori and the Will of the Wisps do not have any checkpoints. The idea is that you need to execute the perfect sequence of moves to navigate your way around the obstacles quickly enough to not get caught by the ever-approaching enemy. If you die, you’ll start right back at the beginning again and need to start over. Brace yourself, because you’ll likely die a few times as you get a feel for how to pass through each section quickly enough. This is all about learning what you need to do by discovering and then retrying. The Initial Sprint: The start eases you in gently, as it is just a series of running and jumping. The first gap will likely require a double-jump and Dash to overcome, the second gap sees you come face-to-face with a vertical stick. Slam into it, and it will begin to fall over, making a handy platform to carry on your run. You see a hanging lantern that you need to Bash from to get over the next vertical stick barrier onto the wheel platform on the other side. A couple more jumps will see you come to a big wheel, which you will drop into.

The Big Wheel: As you drop into the big wheel it will separate from it fix, and begin rolling downward. The result will be you spinning inside too. Watch out for the spikes inside the wheel for two reasons. Firstly because they cause you damage, and no one wants that, but secondly because once the wheel has stopped moving a hole where the spikes were will appear, and that’s where you’ll escape. The spikes will be on the right of the wheel when the breakaway, so look out for that, and try and be as close to them when they break off as possible to save yourself some time.

Bash and Grapple: Once out of the wheel, proceed to the right and jump over to the lantern and Bash off of it, over the wooden post. To avoid landing in the water on the other side, dash under the hanging post, and then Grapple when you see the blue moss on the rotating wheel ahead. Try and time your jump so you fly right, and then Grapple again to the wheel ahead of you. When you hit this wheel, it will swing anti-clockwise, and then come to a stop, when it does, jump off and then Bash off the lantern ahead of you and jump or dash to avoid the spikes. Grapple Trio: You’ll next be required to perform three Grapple moves in a row to floating hooks. The first is a similar move to the last Bash lantern you did, as it has spikes afterwards that you’ll need to dodge. You’ll need a leap of faith beforehand and then Grapple before you hit the spikes. Similarly, with the second Grapple, this comes quickly after the first and a successful execution will prevent you from touching the spikes in between. The angle of the second will see you climb, and you should notice the third hook come into view. Grapple on to that to finish your climb and land back on the ground. Proceed to the right until you come to a rotating large wheel.

Bash Wheel: The final section is arguably the trickiest. You firstly need to jump into the wheel straightaway as you approach, in the small gap between spokes. This will then lead you to a lantern to Bash off of. When the game briefly pauses to angle your Bash, this should give you time to notice the next one, to the right and slightly below where you are. You’ll need to then Bash off this second lantern, to the third, and then to the fourth, making sure you get your angles right. Once you’ve Bashed from the fourth, you should see a Grapple hook in the top right of the screen, which is the key to your escape. Once out of the wheel, just run right as fast as you can to victory. You’re going to die here a few times, so don’t get disheartened when you do. This is part and parcel of the Escapes in the game, so keep at it and you’ll get it eventually. Also, bear in mind that there is actually a bit of leeway in terms of how quick you need to be in this Escape. So if you miss a Bash, and have to take a slightly slower route, keep going, all might not be lost. Considering this, it’s always beneficial to take a little time with the angle of your Bash move off lanterns. Aim a bit higher than you need to and the arc of your jump should land on the next one. Avoid rushing, as this might actually lead to failure.