Ori and the Will of the Wisps | Complete Boss Guide: Howl 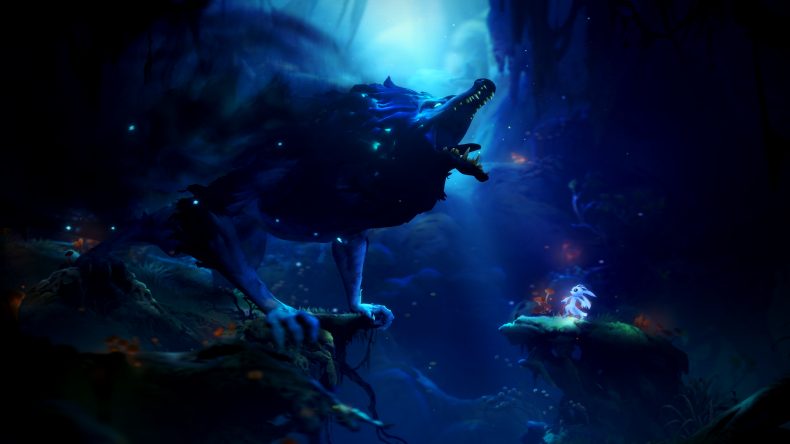 Howl is the first boss you meet in Ori and the Will of the Wisps and forms part of the tutorial section of the game. Here both your combat and platforming skills will be put to the test. The eagle-eyed amongst you will have spotted him in the background as you approached the Keystone Door after finishing your quest with Tokk. A little further on and Howl pounces through the screen, roaring at you. The first challenge will be initially escaping from his pursuit. You’ll need to immediately head to your right, there will be a few jumps you will need to make as well as some small ridges to climb over. You can afford for him to catch you a bit, as a simple touch will just mean you lose some health. You’ll want to avoid this though, as less health will make the next phase more difficult. If he gets the majority of his body ahead of you, you’ll instantly die and have to start the section again.

If you make it up the second ridge, you’re done, Howl will clamber up after you and take a swipe at you, sending you flying forward. Thankfully, you land right by a torch, pick yourself up, and the torch, and take a big old swing at his chops just in time, sending him recoiling in pain. Now the second phase begins. Armed with only a torch, and not very many moves at your disposal, this battle can seem quite intimidating at first. However, once you realise what to look out for, it is quite a simple encounter. He only has one of two moves at his disposal depending on what you do. If you go in to strike him, he will try and counter-attack with a claw swipe. If you simply stay to the right of the arena, he will lunge in for a bite. Keep him waiting too long, and he’ll keep pressing and you’ll be trapped against the wall and take damage.

The strategy then is one of timing and patience. Wait for him to attack first and then move in with a few swings of the torch. Aim for between two or three hits only depending on how close you are to him to begin with. Then immediately move to retreat to the right. He will attack you, but you should be able to be out of reach when he does. If not, then you were too greedy with your swings. Keep repeating this method and he will fall in no time.

Also, as an additional tip. If you find yourself getting cornered, normally a few hits of the torch should see him recoil back to the left-hand side again. So don’t panic if you feel yourself getting caught in a pinch.