Ori and the Will of the Wisps | Complete Boss Guide: Kwolok 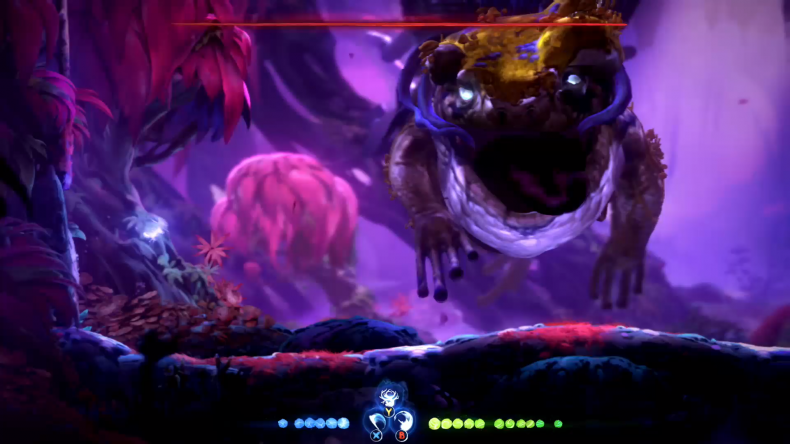 This section of the  guide will help you deal with the Kwolok boss fight in Ori and the Will of the Wisps. Now you’ve survived the Escape section, you’re faced with having to fight Kwolok, who has been corrupted by the Foul Presence. This is a fight in two stages, with no checkpoints. It requires a lot of patience, tests a few of your different skills and demands that you watch the enemy closely before planning your attacks. You’ll be fighting the first phase on dry land, and then the second from within the water, so be prepared. Also early on, Kwolok will smash the ground and create a pit of thorns in the middle of the floor. Avoid touching this at all costs, as it will sap your health quickly in either Phase. Managing your Spirit Shard loadout is definitely worth doing for this fight. Maybe up until this point, you’ve just gone with whatever takes your fancy, but there are some ones that are definitely worth equipping just for this fight. Magnet is a must, as it means you have to worry less about being next to orbs to collect them. Energy Harvest is another good option so that you receive more blue orbs upon killing enemies. I would also recommend Vitality, especially if it’s upgraded to give you more health. If you’ve unlocked extra slots, I’d also recommend Finesse which means you occasionally deal more damage.

In terms of the attacks you map to the face buttons, Spirit Edge is still a definite must for rapid attacks, particularly useful when combined with Finesse. Also, you really should equip Regeneration, as this will enable you to boost your health in the fight. Given that there is a steady supply of Spirit crystals during the fight, you’ll be using this frequently to top up your health. The first phase is on solid ground, and you have a fairly wide arena to run across. You can also use the sides for extra height should you need it. Your general approach should be quite aggressive with Spirit Edge. Look to replenish your energy levels with the respawning crystal to the right-hand side of the arena. Then use Regeneration to top up any health when you have a spare moment. Look out for the following moves:

Rock Fall: Kwolok will shower down rocks from on high. These move fairly slowly and are fairly easy to dodge, so shouldn’t cause you too much hassle. However, when they combine with other moves you could be in a spot of bother. Usually, though, this moment is a great time to get some height and attack repeatedly with Spirit Edge.

Arm Grab: The Foul Presence will slam its arms through the ground, and they will shoot upwards from the ground at your feet causing damage. These arms also act as separate enemies that can be attacked and killed. You’ll likely nab a health and energy orb when you do, so again be aggressive when you see them, swipe either side of you to always kill them, and any damage you take will be more than offset by the orbs you receive.

Slam: Kwolok will briefly rise up and then slam his body downwards, generating a trail of spikes in both left and right directions. As with the Horn Beetle, a double-jump and Dash move should be enough to dodge this. If Kwolok is winding up the move above you, do you best to dodge to the side before he does to avoid damage. Swipe: If you’re getting to close to Kwolok and doing damage, he’ll sometimes Swipe with his hand to cause you damage. This can be dodged relatively easily with a Dash move away from him. Just try to not get too greedy with Spirit Edge and force too many hits, or you’ll likely take damage from this attack.

Light Spit: Kwolok will retreat to the other side of the screen to you, and then proceed to spit light bolts at you. Just before they hit, use Bash, aiming for the opposite direction to Kwolok to fire them back at him for a free shot. Aim higher than you think to account for the arc of gravity.

Tongue: Kwolok will also attack with his stretchy tongue. It happens relatively quickly so can be hard to dodge, but Dash is your best bet here to avoid it. After Kwolok has lost about 40% of his health, Phase Two will start. You will spend most of this second phase underwater. Keep your speed up by holding A as you move around. Also don’t forget to come up for air periodically, as if you don’t it’s instant death and restart of the boss fight from scratch. Also, there’s no way to use regeneration underwater, so you’ll need to pay more attention to your health in this phase. Try and enter this phase will full health if possible. You’ll need to Swim Dash out of the water for height and then use Spirit Edge for damage. Kwolok’s moves are now noticeably different, see below:

Tongue: The same as in Phase One. Swim Dash this time around is your best bet to avoid it.

Homing Missiles: A similar attack to Light Spit from Phase One, except these come from above, given Kwolok’s position. Bash them back his way like with Light Spit. You might be lucky and get two or three of these to fire back. The angle is easier to get right as you don’t have to account for gravity. They also do a decent amount of damage for each hit too.

Poison Spit: Kwolok will shoot out a stream of Poison that will damage you if it touches you. He will fire four in a row in the direction of your current position. Regular speed swimming is just about fast enough to outrun it, but this can be difficult if you’re already in a corner. Also note that they linger for a fair while, and will still damage you so make sure they have fully disappeared before you retrace your steps. During this attack focus on avoiding damage rather than attacking. Arm Grab: Very similar to in Phase One, except now, your only means of attacking the arms is with a Swim Dash. Two Swim Dash attacks should kill an arm, which you definitely want to focus on, as this will give precious health orbs. This is super useful given you can’t use Regeneration. Bubbles near the surface indicate where arms will reach up from, so you can avoid damage and position yourself for a Swim Dash.

Rock Fall: Very similar to Phase One also, and still easy to dodge, especially whilst swimming. Swim Dash out of the water for some height and attack Kwolok during this, avoiding any unfortunately placed rocks.

Suck: Kwolok will come into the water to one side, and face the middle of the arena. He will then begin sucking you towards him. If he swallows you, he will chew you and spit you out for large damage. The key is to swim in the opposite direction and Dash away as you get close to Kwolok to keep your distance. Normally four well-paced Dash moves are enough each time. Keep an eye on your oxygen levels here, as running out still leads to instant death. Take note though that surfacing during this move will come at a cost of damage, but this is preferable to running out of air permanently and having to restart.