Ori and the Will of the Wisps | Complete Boss Guide: Mora 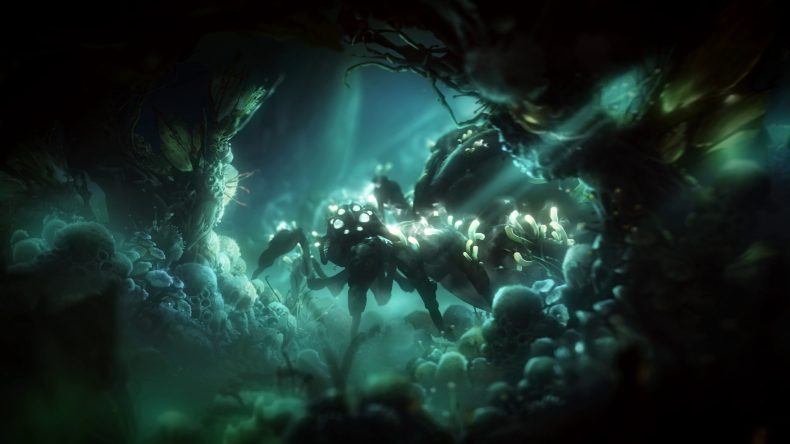 This part of the guide will help you to beat the multiple phases of the giant spider boss Mora fight in Ori and the Will of the Wisps. Once you’ve worked your way through Mouldwood Depths, your reward is a fight against a massive spider, Mora. She’ll initially plunge you downwards, and you’ll fall into the arena properly. The handy-looking ledge here won’t be around for long, so don’t bother with it. You should notice that either side of the arena, the walls are bare, meaning they can be climbed. This will be especially useful for dodging and gaining height during the fight. On the left wall, is a Spirit Crystal which will respawn over time, so get to it when you can, and use this in combination with the Regeneration move to keep your health topped up. With that and learning her moves, you shouldn’t have too much trouble. Spirit Edge is again very useful, and remember, you need to hit her head to damage her. Stab: The most common move Mora will do is her Stab move, where she’ll rise up and then stab back down on the floor with two of her legs. It’s fairly easy to dodge thanks to the large wind-up animation and gives you a decent window to get in and attack her head. She might do a few of these in a row, so keep your wits about you to not get stuck.

Swipe: This is a much more lateral move where Mora will swing an arm sideways towards you. Double-jumping and Dashing away should be more than enough to avoid its relatively short range. And again, there’s a short window afterwards to let loose with some of your own attacks.

Body Slam: A familiar move to you by now, but Mora can also slam her body into the ground, and generate a wave of spikes in left and right directions. You’re used to it by now: a double-jump and Dash will see you through.

Multi Lunge: Mora will launch herself across the arena, and plunge two legs into the ground, similar to her Stab move, but having moved a much larger distance. She will also follow this up with one or two further lunges downwards with her feet. To avoid unnecessary damage, it’s best to wait for her to finish this move before moving in to attack her head again. After you’ve done a chunk of damage to Mora, she’ll use her body to slam into the wall, revealing a bit more of the arena. It will also cause a Grapple hook to appear for your to use, as well as some additional temporary platforms. She’ll also now have an additional few moves for you to contend with:

Battle Cry:Mora will let out a piercing cry, and bring forth a few spider minion enemies for you to contend with. Like other smaller enemies in boss battles, they shouldn’t cause you too much trouble, and their health orbs should greatly outweigh any damage the dish out. Quickly dispose of them with Spirit Edge.

Bite: Similar to the Body Slam, but this causes projectiles to fire at you instead. However, this time Mora uses her mouth to slam the ground instead. Because of the shorter windup, and the use of the head instead, chances are this will catch you off-guard more than Body Slam ever did. Dodge or Bash back the projectiles for damage. Spit: The same projectiles as Bite, but shot straight at you from her mouth. Dodge or Bash them back in the same way.

Charge: There’s a reason for the Grapple Hook and additional platforms, and it is Mora’s charge move. She will run at you from one side of the arena and won’t stop. She is too big to simply jump over, and so the use of a Grapple, platform or wall if one is nearby are your options to avoid damage here.

Beam:Mora will move to the middle of the arena and raise up by her body, being held up by web. She’ll then shoot a beam out of her mouth and rotate her head so the beam covers a wide distance. The most consistent way to avoid damage here is to run up an arena wall and get as high as you can. At the top, the beam won’t reach you. When it’s done, leap in and resume attacking.

Having beaten Mora down to roughly half of her health, your next challenge will be to escape from her. She’ll disappear into the background, and you should notice two orange glowing lanterns above you signalling you need to get a shift on and ascend your way out. Bashing: So immediately jump to the first lantern, and the Bash upwards to the second. Aim the second Bash upwards as well, but to the left a bit as you’ll want to grab onto a vertical ridge and use it to jump off. Jump over to the webbed hanging platform and jump over it, to a platform surrounded by thorns.

Tree Climb: You should notice a Grapple Hook directly above you, so Grapple that and you’ll be inside a hollow tree, which you must now climb. Again move over to the left to be on the correct side to avoid the overhang on the right-hand side. The climb up so more, jumping from side to side as you do until you reach an opening on your right. Just be careful to avoid the thorns above you.

Grapple then Bash: Upon exiting the tree, you’ll see a Grapple Hook to your right, so Grapple that, and then, a Grapple Hook above you and to the left should then come into view. As soon as you have the angle Grapple upwards to that one next. Then a sprint through another hollow log to the left will see you arrive and the next arena, where you fight with Mora will resume.

Getting Mora to just under half her health will begin the Escape part of this boss battle. The next part of the fight with Mora is the same as before, the only change being that the Spirit Crystal is now located on the floor and there are hanging lanterns to Bash from rather than Grapple Hooks. All of her moves are the same as before, so keep on attacking and dodging where necessary.

The final part of the fight, when she is down to a quarter health, sees you fighting Mora in the dark. She’ll have a light around her, and make sure you’re using Flash to keep a light around you. The drain of Spirit for Flash means you’ll need to juggle that and using Regenerate for health, but you should be used to move-sets by now, that this is just a case of being patient with your attacks. When her health bar empties, you can finally rest easy as Mora is down for good.