Ori and the Will of the Wisps | Complete Boss Guide: Sand Worm (Escape) 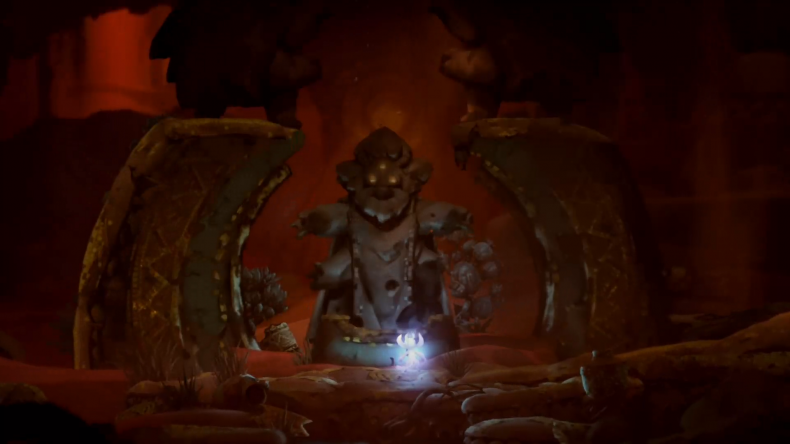 Prepare yourself for the toughest, most punishing escape in Ori and the Will of the Wisps. It’s frantic, frustrating and requires the tight and efficient use of lots of different skills. But it certainly is possible with some practice, so don’t despair if you find yourself dying a lot here, that is expected. Dash is definitely your friend in the opening parts to try and get some room between you and the approaching Sand Worm Thorn Drop: The next section can be over relatively quickly, and needs to be to not get caught by the Worm. But it’ll take a little bit of practice to do so, as well as avoid the thorns in your path. Jump down the gap, but then immediately hold left to pull back your fall to as close to the thorns you just jumped over as possible. If done correctly, you should miss the next set of thorns coming out from the right. This will allow you to use the second jump of your double-jump to jump right and dodge the upcoming thorns that will appear from the left. Now in an ideal world, you’ll have Triple-Jump equipped here meaning your last jump can be back to the left to avoid the last set of thorns. Failing that, though, use Dash to breeze past them. The Sand Climb: As you’re still falling, either use Dash or Burrow Dash to the hanging sand ball, and then Burrow Dash into the sand portion on the ceiling when you are in range. You’ll need to move through this sand relatively quickly, and Dash in the sand if you have space to. It is critical to exit the sand at the top with a Burrow Dash to gain height and you will see a Grapple Hook to use above you. One grappled, you’ll be propelled higher, and need to zig-zag between sand portions on the right, and then left, then right again, ensuring you Burrow Dash out of them to the next one.

A little platforming: Back to some traditional platforming now, as your last Burrow Dash should land you on some precarious platforms, which you need to quickly run across. You’ll then need to jump and climb up the stone pillar to your right. In the distance, aim for a Grapple Hook, followed by a sandbag you can Burrow Dash through before coming to another pillar. There are then a further two sandbags you need to successfully Burrow Dash through, and you’ll then notice that the Sand Worm disappears. But you need to keep moving! Up and Away: Over a ridge, and in between some thorns, you’ll spot a blue flower, which bouncing on will send you flying into the air. As you do, you’ll notice the Worm is back on your tail, and you need to quickly Sand Burrow through two consecutive sand patches above you, and then a third which is up and to the left of you.

Hide and Seek: The Worm will now be hot on your heels, but luckily there is an area of sand underneath you to your left. Burrow into that, and control Ori so that he stays concealed in the sand. Let the Sand Worm burrow past, all the while keeping Ori under the sand. As soon as the end of the Worm has gone by, make a dash for it, because he’ll run on a small loop and won’t be far behind you. Higher and Higher: You’ll spot a sand area on the roof of the next tunnel, so Burrow Dash into that, and then keep moving. Burrow Dash out vertically to gain height, and then Burrow Dash into two consecutive sandbags which will force you even further upwards. When you’ve done that, you should see a Grapple Hook further up and slightly to the left to swing towards. Then there’s another sandbag, then another Grapple Hook, before arriving at another small windy sand section to Dash Burrow into and through the other side.

The Final Push: You’ll exit the sand onto a wooden ledge and need to Grapple Hook up onto another wooden platform. Run left and enter the sand you come across. Burrow Dash where you can through this section of sand to give you some room, but don’t do it if the area is too tight to maneuver. There’s a gap in the middle of the sand as you progress, so if you can Burrow Dash in and out, but don’t worry if you can’t, just keep moving away from the Worm. Keeping moving towards the top left of the screen, and eventually, you’ll reach the end and have successfully escaped the Sand Worm.