previous
The Legend of Zelda: Breath of the Wild Review
random
next
The Incredible Adventures of Van Helsing: Extended Edition Review
0 likes 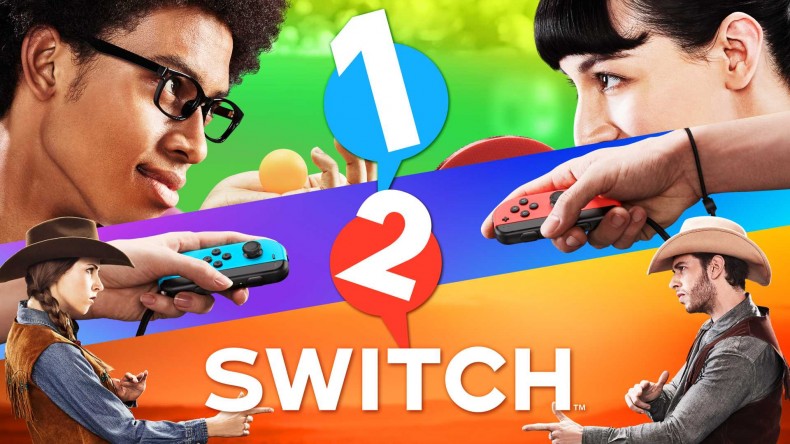 Amazon lists 1-2-Switch for purchase at just shy of £40. I’ve never started a review like this, but I’m so stunned at the asking price for this game that if I write it down maybe I’ll understand it.

It’s not that 1-2-Switch is badly made or anything, it’s just that after your first time playing it you’ll only ever be left wondering “is this it?” on subsequent sessions. Even the kids will move onto the more grown up, in-depth affairs, because this is, no matter how you look at it, a tech-demo that should have been included with the Switch console. There is fun to be had, but in short bursts, and you’ll play it every time you want to show the system off to someone new to Switch, but this is a shallow game, with a few fun minigames, and some cool tech.

But that’s the opinion of an old git, I guess, someone who plays a lot of games and has done so for many years. So I got my kids, and a friend’s kids to play it, and they enjoyed it. In fact I was worried for a bit that I was being harsh. That is, until after the first run-through of team battle, they immediately switched (ha!) to another game. At first, they were enjoying it immensely. As they were asked to stare into one another eyes, the two pairs of brothers were tickled, laughing before the mini-games even started. We even played it in the car (I didn’t, I was driving), and I could hear the Soda Pop game (shake a bottle, pass it on, don’t let it pop on you!) going on behind me. But again, favourites were picked quickly and even they slowly faded to the allure or Bomberman and Zelda.

HD Rumble, though, is fascinating. I can’t wait to see how this is developed into a more full experience. In Ball Count, you have to roll your Joy-Cons around and guess how many ball bearing style balls are inside it. The rumble is truly amazing, and absolutely everyone who has tried it has been impressed. Milk is also fun for a while, but the joke wears thin pretty quickly.

The trouble is that every game has an introductory video explaining how it is played, but then people who aren’t overly familiar with the Joy-Cons will ask “wait, what do I do?” which then requires further explanation. The people in the videos themselves look like they’re having more fun than you ever will, but at least you can have a laugh at their stupid faces. A lot of these games are based on sound, which is a nice idea, but when you’re all shouting and laughing, you won’t hear the tutorial video, or sometimes even the audio cues for the games. Plate Spin is another decent game, because it actually encourages physical interaction. Where other games are designed with you swinging an imaginary sword, baseball bat, or ping pong bat, Plate Spin requires you to spin an imaginary plate while your opponent tries to distract you in order to have you drop and thus break your plate and lose. There are a couple of Sword-based games that are fun, but one of them essentially amounts to a game of Slapsies-cum-Thumb-War (you have to swing your sword downwards to bonk your enemy on the head, but they can catch it). Again, fun, in very short bursts.

Sneaky Dice is a favourite. This is a fake-out game that feels like it belongs in the Jackbox Party Pack. Shake your invisible dice and you get to “feel” the number your opponent has rolled. Then you have to fake them out (or not) as to their score. You can reroll three times, and the highest number wins. Quick Draw and Fake Draw, like many of the games, asks you to face one another and listen. When the call is made, you pull your guns (Joy-Cons) out and shoot your opponent.

Elsewhere, there’s a host of games that are just dull or not fun: Gorilla, Runway, Shave, Telephone (I smashed myself in the face playing that one), Wizard, Zen, and more. You can probably guess what all of those games are by the names, I’d wager.

All of these games can be played individually, but they’re better in Team Battle, which is a Mario Party-like board game (though nowhere near as in depth) that sees you move across the board playing these mini-games. The winner of each game gets to spin a wheel and move up the board, and at the end you’re shown a results screen that, like Mario Party, is full-on nonsense. Last time we played, the losing team won six of the minigames, while the winning team won five of them. So despite “winning” on a score criteria, none of it mattered because they rolled the highest numbers. As I say, it’s like Mario Party: you win by losing.

As a concept, 1-2-Switch works to show off the “play anywhere” concept, but it’s just painfully average and over-priced. If you’re desperate for a new game, buy Snipperclips or Bomberman. Christ, buy Shovel Knight again and play through the timed exclusive new content, but understand that 1-2-Switch will only ever feel like something you shouldn’t have had to pay money for, and for all the fun you’ll initially have, it’s destined to be left on the shelf gathering dust after a week or so. Wii Sports this is not, and that’s a great shame, because there is fun to be had here, just not enough of it.

HD Rumble is very cool
Milk will create some laughs

There is fun to be had, but in short bursts, and you'll play it every time you want to show the system off to someone new to Switch, but this is a shallow game, with a few fun minigames, and some cool tech.

ARMS, 1-2 Switch, and more are discounted in a New Year Sale on the eShop