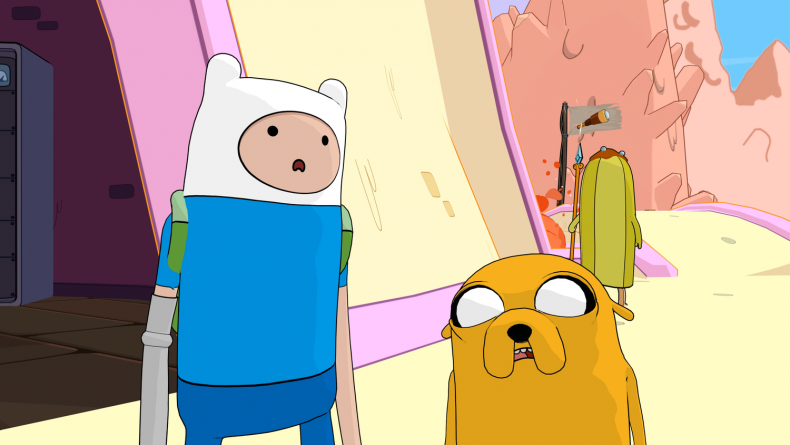 Being a dad has it benefits, and of of those said benefits is getting to watch kids TV again without ever having to the feel the need to justify yourself. Cartoon Network has some absolute bangers on its network such as The Amazing World of Gumball, We Bare Bears, and Steven Universe. Perhaps the most famous of all is the wonderful Adventure Time. It is a colourful world filled with imaginative characters and well-written stories that make you laugh and cry. So far, developers haven’t quite managed to get it right when it comes to adapting it to video games, and whilst Pirates of the Enchiridion is the most successful adaption yet, it’s still filled with holes that take away the enjoyment you have when you first set sail.

The land of Ooo has been submerged in water thanks to The Ice Kingdom melting, and it’s now up to Finn and Jake to save it. Along with familiar friends like BMO and Marceline, you’ll sail the seas and see all of your favourite places from the TV show, finding loads of references to old episodes and subtle nods to all things Adventure Time. It’s not entirely an open world – in fact, it’s too baron to be a living and breathing world, but you do get to explore a little. I was hoping there’d be more life in it, especially as the colour and the animation is so vivid and true to the series, but most of where you get to go feels empty. Apart from the seldom character here and there, most of Ooo is filled with enemies you’ll more than often have to fight due to the inability to avoid them. Most of the gameplay follows typical JRPG titles, such as the Persona series, only in its most fundamental form. If you’re a young kid, this is perhaps a good entry point into the world of turn-based games. Each character will get to attack, and as you successfully strike the enemy, a bar at the top of the screen accumulates power – a pool of energy that you’re whole group can tap into. Once there are enough points in it, you can use them to pull off one of your characters more powerful attacks.

Some enemies have resistance to certain attacks, but you’re never pushed to mix it up all that much. You’ll also be able to use buffs, but again your main attacks and special attacks will overpower the enemy. To level up your party’s abilities and unlock new ones, its important to collect currency from treasure chests by smashing them up and completing quests. There are sidequests, but they are normally fetch quests that become laborious after a while, and even when you get a character’s new powers they aren’t a necessity as the skills you already have will probably be enough to beat whomever steps in your way. It’s not particularly challenging, either, so once you’ve found your feet with the typical party classes, the game can become less of a challenge and more of a chore. Going back to the world, each area is linked by long travels across the lifeless ocean. When you arrive at a new location there’s very little room to explore. It’s linear, taking away some of the glow you may have been hoping for. Like the LEGO games, certain characters are required to traverse the environment. For example, Marceline can stealthily get past guards, and Jake can grow to carry you up to higher ledges. He’ll also turn into a motorbike, but getting around on him can be tricky to control, and due to the small spaces and areas it doesn’t feel worth the hassle.

I noticed quite a few lag-like issues when entering a new area as well as during some of the cutscenes. It’s a shame as they are quite severe, and when engaging with characters through the scripted segments it can drag out some of the scenes, often making the punchlines deliver late and not hit with the impact they were intended to hit with. The humour of the show is often well presented, and it shines when you’re travelling on the boat. Both Jake and Finn will burst into song, relaying info of quests and story through sea shanties. It’s not perfect, and not as natural as on the show, but the writers have done a great job of transferring it to PotE. Another place where the dialogue hits home is through Interrogation Time minigames. Sometimes characters will withhold information, and it’s up to you to play good cop, bad cop, providing a highly entertaining and offer a break from the rinse and repeat gameplay.

Adventure Time: Pirates of the Enchiridion is faithful to the show and the world is lovely to look at, but the game never challenges, and the repetition towards the end becomes quite a chore. The soundtrack is lovely, though, and as well as new music, you’ll recognise familiar sounds from the show. It’s not a massive game, taking anything from 10-12 hours to finish depending on how much of the side stuff you do, but I didn’t dabble in anything from the main story because I never felt the need to. That’s not to say some won’t enjoy it, especially fans of the show and gamers of a younger generation.

Whilst not the most challenging of games, it still offers fans of the show a chance to enjoy it in a different light. Gameplay can become laborious, though, and the world is more vacant than it should be.