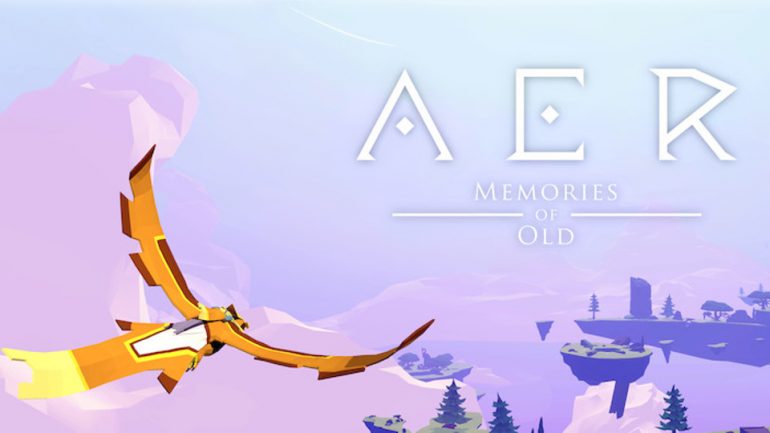 I couldn’t shake the feeling while playing Aer: Memories of Old that someone really wanted it to be compared to Journey. Outwardly it’s not all that similar, its papercraft aesthetic evoking memories of Tearaway first and foremost. It’s gameplay however, relaxing, beautiful, and mostly danger free, did at least make me think of thatgamecompany’s masterpiece.

In Aer you play a young shapeshifter named Auk, whose world has literally fallen apart. Or floated apart, actually. It goes on a lot about gods and kings and a great calamity that has rendered the world into a collection of floating landmasses and scattered temples. Your quest is to save the world by bringing together the disparate sections of a missing mcguffin, which you must find by first finding mystic keys of… To be honest, the story isn’t great.

It’s more a throwaway, convoluted framework for shifting in and out of bird form and flying from one temple to another. With a tap of A, Aer transforms into a golden eagle and can soar across the sky, through the clouds and high above the pretty but ultimately barren landscape. The biggest problem with Aer is that there’s so little direction and so little to actually do. On some of the landmasses there are temples, within which lie lengthy but simple puzzles that often unlock a door or secret passage leading to the next ancient artefact you need. A mystical two-tailed fox joins other stylised animals in spouting over-written instructions, but beside a handful of villagers who don’t offer much, that’s it for your interactions.

Little white lights litter the landscape, and using your magical lantern near them shows echoes of the past, which is a cool way to divulge backstory. There’s often not much to help you piece together any kind of timeline, but it’s quite eerie to walk around a former battlefield and see echoes of people fighting, killing, or running for their lives. It actually highlights the lack of, and massive need for, some kind of collectible in Aer. A currency, a codex, anything to compel you to explore its vast and largely beautiful world beyond dialogue bubbles. There are statues erected to ancient gods that will award you achievements if you uncover them, but they are few and not well hidden.

The one thing Aer nails is, to be fair, its most important element: the sense of flight and freedom is wonderful as you leap into apparent oblivion only to rise again with the tap of a button. The speed and altitude feel exhilarating – it’s just a shame there isn’t much to do in between flights.

Not much to actually do
Little direction

Aer is a pretty game, but ultimately there's little to do and not much to compel you on