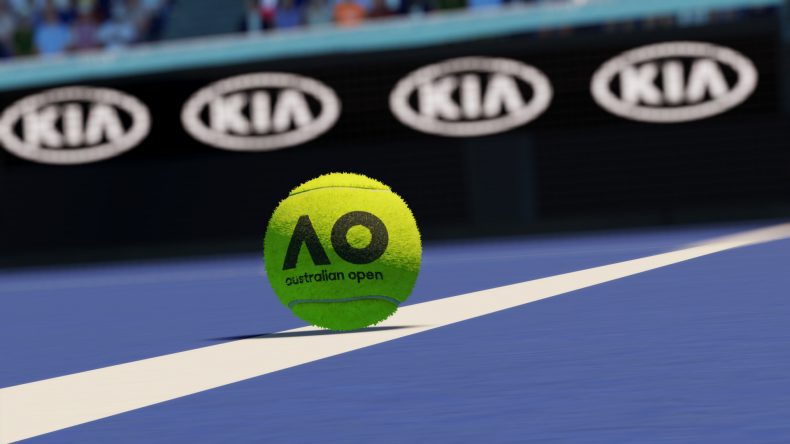 As I started up AO Tennis 2, I was greeted with something I didn’t expect. A cutscene intro of Australian Open heroics would have made sense. Maybe even a front screen showing lunging tennis swings from Australian Open greats. But no, instead I’m treated to Rafal Nadal’s head, that I can move at will with the analogue stick. It reminded me of the start of Super Mario 64, where you can mess about with Mario’s face before starting the game. This version certainly looked a lot better – it was definitely Nadal – but I felt like the execution was lacking as I could only move his head a bit. If only I’d know what a metaphor that would be for AO Tennis 2 overall.

As the name suggests the central tournament here is the Australian Open. But don’t be fooled into thinking this game limits itself to a single competition. Sure the showpiece is undoubtedly serving for supremacy in the Rod Laver Arena, but there’s also much more content on offer for budding tennis fans. The focus is clearly on personalisation, with you able to craft your own career and even create your own tournaments to partake in. The devil is the detail though, and when you first start exploring the customisation options available, its depth becomes clear. Frankly, the character creation mode would make an RPG blush, with you able to change anything from the width of your nasal fat pad to the overbite depth of your aspiring tennis champion. Furthermore, you can even design your own tennis venues and all the courts and stadiums within it. There’s so much depth from standard detail like capacity and court type, right down to logo design and placement. Never have I really cared for such personalisation details, but I do admit to being taken aback by what I could tinker with. And then being able to play in your creations gave it a sense of purpose – and I’ll admit it, pride – especially when they don’t stand out as garish abominations.

Getting on the court and actually playing some tennis is where AO Tennis 2 will begin to divide players. In fairness, there are multiple different difficulty levels that will suit all abilities, however again, looking into the detail reveals a slightly different story. The Rookie level is the easiest setting and literally reduces the game to a farce. You cannot hit the ball out, or mistime your swing, so all you really need to focus on is the direction and type of shot you want to play. However, just a step up to Amateur level feels like a big jump, with all mechanics now in play to consider, although admittedly against still weak opponents.

At this setting or above, you begin to realise how AO Tennis 2 wants you to play. To take part, you’ll need to position your player, choose a shot type, swing at the right time for power, and aim your desired placement of the ball in your opponent’s court. How well you did all of those things together will affect how close the ball ends up where you intended, or indeed if you hit the ball at all. I’ll admit at first I found it frustrating to have to not only look at a power meter by my player to try and time my swing, but also look at the other side of the court at where the ball marker was moving to. Nailing both felt sometimes impossible, and often through more luck than judgment. I certainly felt like an amateur, as the difficulty rating suggested. It may sound obvious especially for a game that is emulating sport, where dedication and practice are paramount, but persistence really is key here. More than most titles, I cannot recommend enough playing the tutorial section first to understand the basics. It does a really good job of explaining the different aspects and considerations to different shots and playing them accurately. Sure, they never quite seem to execute as well in the heat of a match, but at least you go into them understanding what’s expected of you, and give yourself a fighting chance. Things do definitely click the more you stick with it, and you feel like you are getting to grips with it the more you play. However it still isn’t perfect, and the time you need to invest to get to that place of confidence and competency will put off some players.

Visually, it’s a very nice game to look at, with some of the best graphics in a tennis title. The player models look pretty good, and instantly recognisable from each other on the roster. The detail on the courts, balls, even the sports luggage is noticeable, even if it does insist on some unnecessary zoom in shots on each of them at the start of each match, accompanied by some out of place dramatic music. Speaking of audio, sadly this is an area that feels lacking. Commentary is absent, which is a blessing, as you avoid the repetition that pre-recorded set audio always falls into, even in big-budget sports titles like FIFA. However, its absence results in an eerie quiet for each match, save the groans from the players, and almost tinny-sounding reactions from the crowd with every winning shot. It’s not a great overall sound experience and feels at odds with the clear attention to detail that the visuals have had. The limited roster also stands out, particularly in multiplayer. For career mode, there’s plenty of player options from across the ranking spectrum. Understandably the roster for multiplayer is more refined to stop too much choice feeling overwhelming. However, licensing restrictions mean the most memorable names aren’t included. So should you want to replicate this year’s Men’s Australian Open final, you can’t because Djokovic and Thiem aren’t on the roster. You can’t even try and replicate Federer’s 3rd round heroics against Millman because he isn’t in it either. It’s a similar story in the women’s game too, with only Ash Barty being the big-name inclusion as the likes of Serena Willams or Naomi Osaka are absent. Licensing troubles are understandable, and it doesn’t ruin games like PES 2020 when they aren’t completely there. But it does tarnish the experience knowing you can’t ever fully replicate the titular tournament with the right players.

Nailing a tennis game that does a good job of balancing the intricacies of the sport with accessibility for players of all levels is a tricky affair. Often they can either become swamped in detail, or end up as a more arcade title akin to the Mario Tennis series. It’s a tough middle ground to achieve, and AO Tennis 2 is definitely a step in the right direction, especially visually, and with its focus on customisation. However, the controls feel fiddly, and sometimes unresponsive which can mar the experience. The poor crowd sounds and limited roster just tarnish things further, as do the load times which seem to last just a little too long based on what’s involved. It’s certainly not a bad tennis title, but AO Tennis 2 falls just short of really clicking with you and becoming a truly memorable sporting experience.

AO Tennis 2 is a good-looking tennis title with plenty of things to tinker and tweak with. However the fiddly controls and limited roster mar the experience.

You may also like
ao tennis 2Big Ant Studios