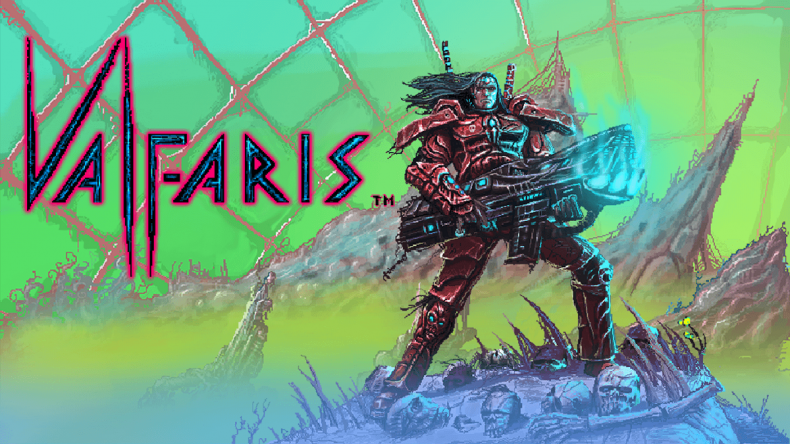 After a long day at work, you want to put your feet up, relax, and play some video games. Sometimes, you just want to shoot aliens and slice them in half. Games with hefty skill trees and strategic gameplay are all well and good, but using a big gun to mow down waves of ugly as hell monsters is a great stress relief. Valfaris should replace therapy, stress balls, and punch bags. With a banging heavy metal soundtrack and plenty of blood and gore caused by a persistent murderous rampage, Steel Mantis’ side-scroller is an almighty action-platformer.

You play as Therion, the son of Valfaris. After the vanished fortress of Valfaris reappears, it’s up to you to vanquish the darkness that has consumed it. Armed with three weapons and plenty more to unlock, you’re never short of opportunities to blow shit up and cut through hordes of varied enemies. The pixel art, created by Andrew Gilmour, is nothing short of gorgeous. It’s a surprisingly colourful mix of steel structures, neon backdrops, and grassy wastelands, and the enemy and boss designs are a joy to tear through. The soundtrack is immense, bringing former Celtic Frost guitarist Curt Victor Bryant on board to create heavy metal riffs and rocking tunes that never grow old. The music is a perfect accompaniment to the action, and like the remake of DOOM, its metal beats help to motivate you to carry on, especially when Valfaris is at its toughest. Whilst it may be difficult at times, you’ll always learn from your mistakes, and if you do struggle, the quick returns after death throw you straight back into the action without being stuck behind frustrating load times.

There’re tons of checkpoints scattered throughout, meaning you won’t spend loads of time retreading old ground. It can get on your nerves if you’re having to fight the same boss over and over again, but each one has a distinct pattern of attack, and the reward of learning how they move so that you can strike efficiently is largely satisfying. Making your way through Valfaris can prove a challenge, as the screen can become cluttered with both environmental hazards and a plethora of different enemy types. Piranhas, lizards, soldiers, lasers, spiders, and more will all end up gunning for you, and when certain areas are restrictive, it can become a little overwhelming.

You’re equipped with three different weapons at all times, and each one can be changed with new weapons as well as being upgraded with Blood Metal. You’ll have a gun that has unlimited ammo, a huge gun that uses up your power gauge, and a sword that will recover power when used. The risk and reward of Valfaris creates a great gameplay loop, and when you become familiar with how to use them all in sync, the game opens up a lot. You’ve also got a shield that can be used to deflect attacks, but when an enemy hits your power gauge reduces, meaning you’ll need to land some successful attacks with your blade to replenish it. Whilst there’re lots of enemies that allow you to recover power, health is seldom available. This plays into how careful you have to be when fighting hordes of enemies, but as mentioned earlier, the frequency of checkpoints make it easier to jump back into the action. There’s little else to worry about in Valfaris. The RPG-lite elements help to give you better and more powerful equipment, allowing you to just focus on the action which is incredibly well done by the team behind Slain: Back From Hell.

Valfaris is a superb action-platformer filled with violence, a killer soundtrack, and some gorgeously grotesque pixel art. It can be punishing at times, but when returning to the action after death is so quick, that addictive gameplay loop lasts until the end. The range of different weapons is a treat, and watching the gore fly all over the place as you rock out to the stellar soundtrack cements Valfaris as a real hidden gem.

Valfaris is a superb action-platformer filled with violence, a killer soundtrack, and some gorgeously grotesque pixel art.