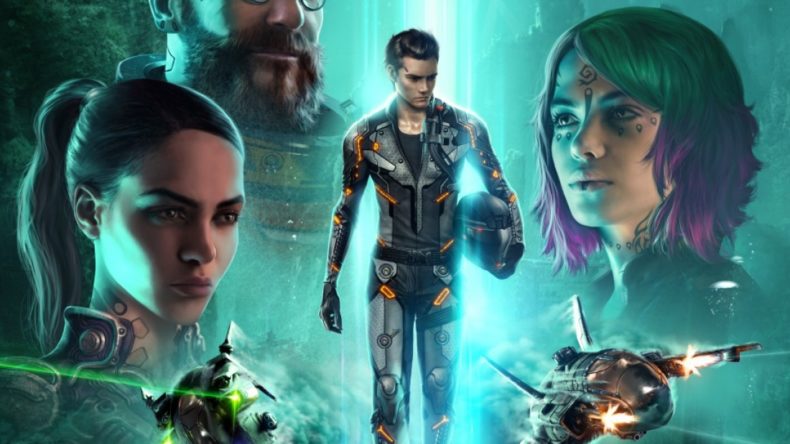 I have to admit to knowing very little about the franchise before going into Aquanox: Deep Descent, and I wasn’t expecting a lot from the title. However, I was pleasantly surprised by the simple-yet-exciting FPS gameplay and the intriguing world. While I struggled a little to engage for the first hour or so, after a while I kind of found myself sinking into it, and in the end I think the simplicity is what did it for me. It turns out I didn’t need to remember or to have played the original game from almost 20 years ago.

It’s set in a far future world where humanity has been driven to living beneath the sea thanks to a globally-destructive war. You play Kaelan, primarily, a “Cryo” who has been in stasis since the failure of “Project Nammu”, an initiative that might have granted humanity a second chance on the surface. Recruited by the mercenary captain of a huge submarine, Kaelan and the other three survivors find themselves in conflict with a destructive, pseudo-religious faction led by the enigmatic Nemo. While the framework is cool and unique enough to remain engaging, the actual plot is fairly rote – and the characters just aren’t all that likeable. The four leads (who can be controlled by other players in cooperative multiplayer) are pretty bland, a fact not helped by the painfully wooden voice performances meant to bring them to life. 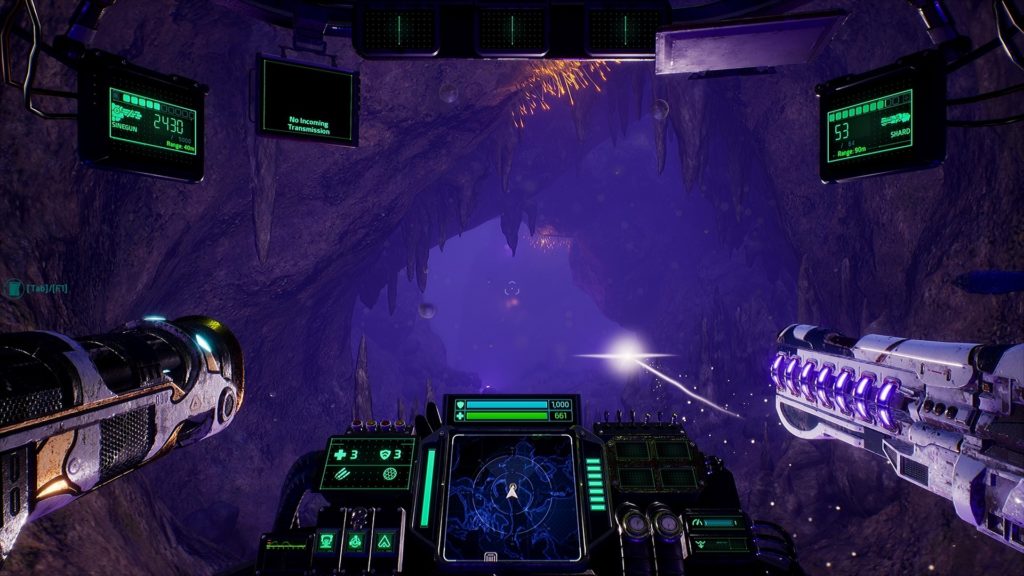 Still, it serves its purpose, which is to see you engage in a succession of underwater dogfights in your DSF craft. The minute-to-minute combat is satisfying and immersive, although the same repeated dialogue bites over and over again threaten to unravel it all. The enemy spout awful playground-level threats at you constantly, although at least it makes it that little more rewarding to blow them to bits. Cutscenes are static, using still artwork of characters to convey who’s talking at a given time, but to be honest I barely noticed. The acting is iffy, but the writing isn’t bad and it kept my attention regardless.

Missions in Aquanox: Deep Descent have pretty genre-standard structuring, from escort duty to sabotage, ambushing the enemy and fighting off sudden attacks from the opposition. The movement controls feel great, too, with the underwater scenario granting a wonderful sense of weight to your craft; you can’t sling it around the place like a standard dogfighting game. Even the faster crafts feel heavy and it forces you to think about your positioning as you can’t easily evade fire, even with the handy boost-dodge. 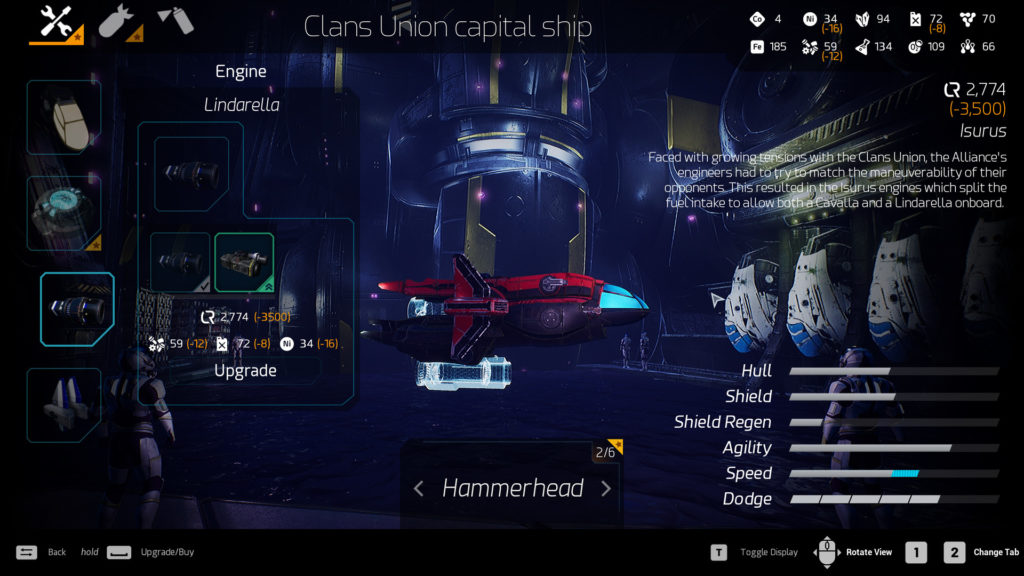 There are 6 different DSFs to unlock, upgrade and customise which you’ll acquire as you progress. While they offer a nice range of movement and attack stats, the real choice comes down to whether you want to be more deadly, more durable, or more manoeuvrable. Each has a certain amount of health and shields, which can be restored using consumables. You can upgrade and modify each craft using scavenged materials, adding improved shields, boosters, health regeneration and a variety of different weapons. There are also secondary abilities you can assign to your crafts, such as summoning a swarm of drones, or a skill that gives you a burst of health if yours hits zero and allows you a second chance at survival.

If you miss any collectibles or loot in a given area, you can use a jump-gate to travel back and sweep a previous location. It’s not exactly an open world and little happens outside of the story, but resources are a precious commodity. There are side bounty-like missions you can pick-up for extra rewards or upgrades, though, which are worth doing – especially as most are quite short and don’t ask for anything too taxing. Some are challenging, don’t get me wrong, but Aquanox: Deep Descent rarely requires you to do much but swim and shoot.

Thalassaphobes be warned, though: this game takes place almost entirely underwater, surrounded by gliding fish, some small, some huge. It’s a world of deep, pitch-dark caverns lit only by your craft’s searchlight, of drifting seaweed, and submerged civilisations. The subnautical world is so well-realised that those with a genuine fear or dislike of deep or open water may struggle to fully enjoy Aquanox. 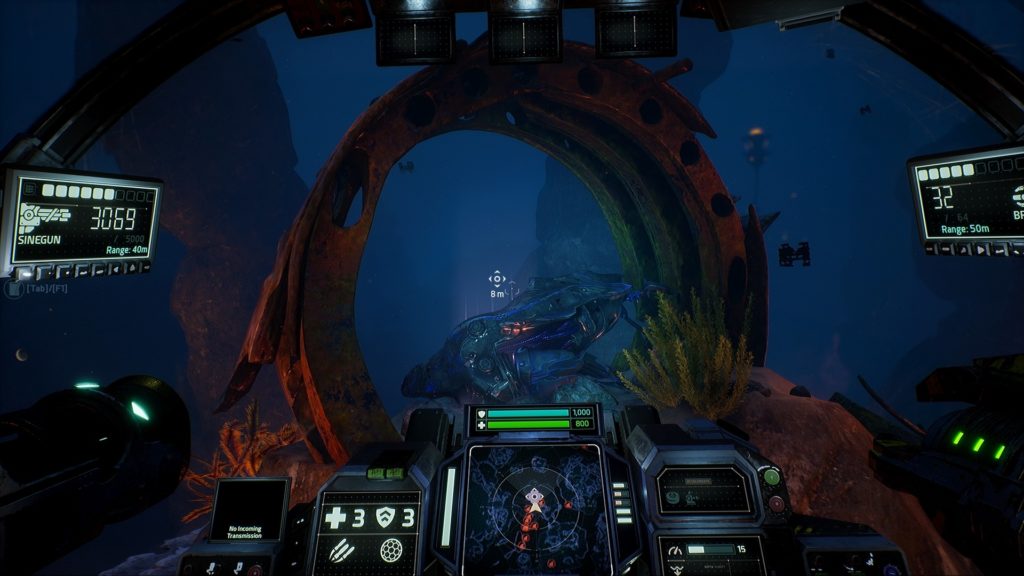 If you favour multiplayer there’s a PvP dogfighting mode, while those who like to work with others can team up and play the campaign cooperatively. The crafts don’t exactly synergise in any way, so there are few real benefits to this beyond simply being social, but the dogfighting is at least pretty cathartic. Again though, the crafts move quite slowly compared to other dogfighters and so it’s just not as thrilling as it could be.

Aquanox: Deep Descent is a surprisingly good shooter. I say “surprisingly” because something about seemed off at first; perhaps because it was barely marketed or looks, in still shots, a little bland. But it’s really quite an enjoyable blaster that will keep you engaged for the 13 or so hours it takes to get through the story. The multiplayer modes feel a bit bolted-on, but the deep-sea environments are top-notch, the story is functional if not thrilling, and the shooting feels satisfying throughout.

Aquanox: Deep Descent is an enjoyable blaster that will keep you engaged for the time it takes to get through the story. The multiplayer modes feel a bit bolted-on, but the deep-sea environments are top-notch, the story is functional if not thrilling, and the shooting feels satisfying throughout.

Way of the Hunter review