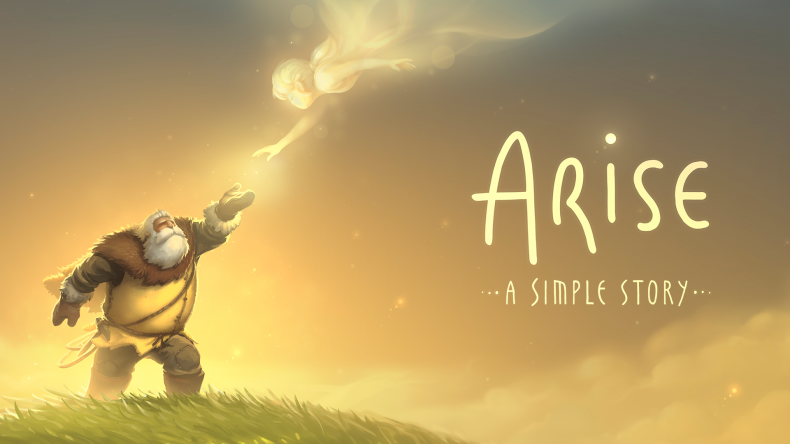 Sometimes, a game comes along that hits you right in the feels. It makes you feel happy and joyful, and glad for the world of gaming. At a time when everything around you seems to be going down the pan, sometimes you need a beautiful pick-me-up, a reminder that it’s not all bad. Thank you, Arise: A Simple Story, for being just that.

Perhaps oddly for a title that exudes positive serenity at times, this adventure begins with your death. As your character’s funeral pyre is lit, surrounded by the solemn looks of your neighbours, there’s a danger of things feeling rather morbid. However, the adventure you’re about to undertake will see you relive key moments of your life. And for the most part, these are packed full of joy and pleasant memories. But, let me be clear, this is not just a narrative you wander through. There’s very much a game here, with each memory taking the form of a level to traverse. Basic platforming forms the core gameplay, but there’s also a time manipulation mechanic around which the entire experience is built. At any point, you can rewind or fast-forward time within a set window. Not just for show, this mechanism is used to challenge both your mental and platforming dexterity to reach the end of each level. Time affects a great many things and alters them differently throughout the chapters of your relived life.

For example, in the first of your memories, you will use time to change the tide level around an archipelago. Lowering the water level will allow you to walk across the seafloor in certain areas. Conversely raising it can cause detritus to float to higher locales, which if you hop onto beforehand will allow you to reach higher locations. In a later level, your manipulation of time affects some creatures going about their day. You can rewind or fast-forward their movements to provide new platforms. You even have a grappling hook that can attach to flying bees who can give you a lift to otherwise inaccessible areas. Those examples just scratch the surface of the ideas on show here. It’s very refreshing that each level feels unique despite the fact that what you’re doing in each level is moving and manipulating time. There’s is a little bit of overlap in some of the levels in terms of how you use time, as some ideas are reused. But mostly there are unique concepts that make each one feel distinguished and memorable from the rest. You can even enlist the help of a second player to focus on the time manipulation for you, whilst you stick to the platforming elements.

The platforming itself is fairly solid, with your character feeling responsive and agile, at odds with his aged body. There’s a subtle emphasis on momentum too, whereby jumps will be higher with more of a run-up. I’ll admit to forgetting this at times and using standing jumps which were unfortunately limp. You can’t control the camera, but it does a fine job of moving with you, offering a decent view. There were only a couple of times when this wasn’t the case. When crossing narrow bridges, with a perpendicular camera, I sometimes fell to my death as I misjudged the perspective. Mostly it was fine though, and any restarts were back to one of the well-placed checkpoints dotted throughout each level.

As well as a game though, Arise: A Simple Story feels very much like a journey of discovery. You uncover more as you proceed through symbolic representations of key moments in our protagonist’s life. You’re finding out what has happened, whilst he is simultaneously recalling it. Aiding him in his recollection gives you a sense of real camaraderie with our hero. But it is in the design where Arise really shines. Each facet works so effortlessly together to create an overall sense of emotion and joy when you play. Simple character models and a slightly stripped-back colour palette allow for character emotions to be on display – similar to games like Wind Waker. The collectibles are additional memories, in the form of drawn image stills. Their hand-drawn design offers a delicacy that perfectly complements the touching moments they represent.

Arise: A Simple Story is also gorgeous to look at, with lovely distinct environments to explore. The backgrounds are also detailed and often expansive, offering a sense of depth far beyond where you will ever set foot. The lighting as well is fantastic, whether it’s in close proximity revealing nearby areas or casting shadows. It’s also used well in backdrops to showcase stunning sunlight rays or foreboding darkness and weather effects.

The music takes inspiration from titles like Breath of the Wild by being so understated at times that you barely notice it. Then when it does kick in, it adds extra gravitas to the key moments. Coupled with the emotional characters and iconic surroundings, the audio elevates the mood to a whole other level. You’ll smile at the happy moments and reel at the sadder ones. Every facet plays its part so you live this tale as much as the character you’re controlling. And frankly, that makes Arise: A Simple Story a joy to play. It’s not a long game, its ten levels can be completed in an evening. But make sure you start early, because once I started, I didn’t want it to stop. I kept playing until the credits rolled, and enjoyed almost every moment. It’s very rare games grab me like that, but it’s hard to argue when a game is making you so happy. I was fully engaged with the story it told and the way it presented it in such a gloriously stunning way.

Simplicity can often be considered a criticism in gaming. It can be accused of lacking innovation or depth. But it’s a double-edged sword as complexity can also breed frustration and loose design. Arise: A Simple Story is perfectly named because that’s all it wants to tell through the platforming medium. However, there’s an oxymoronic complexity to how it achieves this simplicity. It feels so stripped back and full of emotion because the sounds, visuals, creative direction, and character animations are all working together. They create a whole that is so sublime and enjoyable you sometimes don’t notice the parts. You just notice how it makes you feel inside, and the look on your face, be it a smile or a tinge of sadness.

To put it in simple terms, you need to try this game.

Arise: A Simple Story is a delightful mix of stunning visuals, sounds, and engaging story. But there's also a satisfying game underneath to enjoy too.

You may also like
Arise: A Simple StoryPicollo Studios

Arise: A Simple Story gets a release date