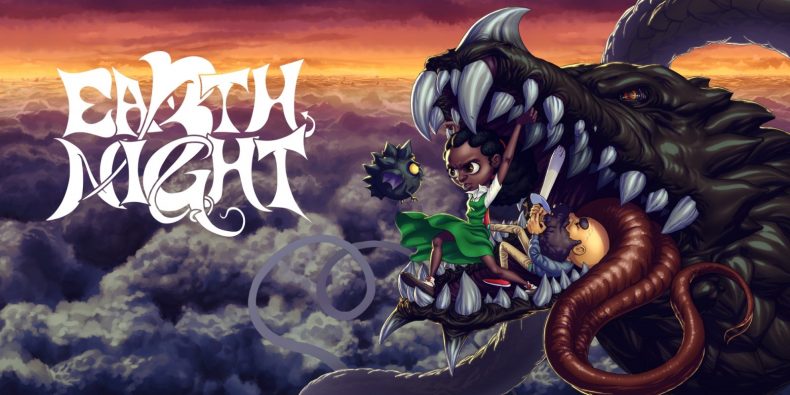 It says a lot for the world we live in that the idea of a planet overwhelmed by enormous, flying, serpentine dragons is somehow slightly more appealing than one being ostensibly overseen by a dementing orange man-child and a bumbling Etonian charicature. The charmingly bonkers EarthNight allows you to freefall from space into such a scenario, lets you run, jump and ride on these giant reptiles, and then encourages you to repeatedly stab them in the head. This all happens within the first few minutes after you boot it up.

Auto runners, endless runners. There are thousands of the buggers out there, and they represent genres that are often associated with tiresome, generic licensed bollocks or Temple Run clones, usually with some kind of a paywall designed to entice us to part with our scrilla. But this roguelike curio is quite unlike anything you will have experienced before. As such, it’s worth spending a couple of quid on.

Hirsute gent Stanley or plucky youngster Sydney are your two playable characters, and each operate and feel very different. Stanley has two different forms of jump, high and long, and is arguably easier to control and master whereas his younger counterpart can air dash and double-jump, but requires deft timing. You are thrown into the action quite dramatically, as your chosen avatar plunges through the Thermosphere towards Earth. Think about the parachute jump in Pilotwings, only instead of descending through points-rich rings you are hurtling face-first into a tangle of insane, interweaving space dragons. Once you land atop one of the undulating beasts, the platform gaming proper ensues. You whizz through each level, using the motion of the dragon, the heads of enemies, and your own mastery of the jumping physics to hoover up collectibles, which include power-ups that unlock new abilities. Chipocrite’s infectious chiptune ditties worm their way into your psyche, and you start to build a rhythm, launching yourself repeatedly through the air to reach new platforms and items, floating, diving, avoiding collisions with obstacles and hazards. When you reach the head of the creature, a QTE begins, and you have the opportunity to knife it to death.

To begin with, things are undeniably tough. You are going to die, lots. The action is procedurally generated, so it isn’t a case of simply learning patterns and routes. What you can learn is how your unlocked abilities can be used to move forward. The upgrades are progressive and each one allows you to aim higher, leap further, and ultimately nail the entire run-through in a faster, more effective fashion. Being able to harness and ride upon fantastical creatures, slice away enemy projectiles with an energy sword, and finally reach that distant treasure is undeniably satisfying. As daunting as things look in your underpowered initial state, there is nothing you cannot overcome with the introduction of an upgrade, which can be accessed by collecting the right item of plunder, or by greasing a particular dragon and exchanging the water, trophies or eggs that they leave behind. It’s fun, challenging, unpredictable, and rewarding.

Bounding upon enemies can be chained into a combo, and once you hit five successive jumps you regenerate some precious health, something that is essential in avoiding the (perma)death that sends you back to the start in a punishing old-school touch. Much like the shoot ‘em ups of arcade yore, when you die the game chucks you a lifeline in the form of temporary power-ups based upon whatever you had picked up in the preceding run. It takes the edge off of the fact you get pulled back to square one, and makes repeat runs compulsive and moreish. If the description above didn’t make it clear enough, EarthNight is a very different proposition to your average. For starters there is the hand painted graphical style, which manages to evoke memories of both surrealist art and classic 90s arcade and Commodore Amiga fare. This insanely detailed animation was painstakingly handled by Jamaican artist Paul “Mattahan” Davey, and the graft he has put in really shows. If you aren’t familiar with his work, then I would strongly advise you take a look. His oeuvre combines comic books, afro-futurist sci fi and sumptuous influences of his homeland and culture. It is refreshing to see a black heroine as the focal point of the game, and Davey’s passion for the project shines through.

While the game looks and sounds like it could have been from a bygone decade, the gameplay and structure is very much of the modern era of mobile games. Originally released a short while back after a lengthy gestation period, this version marries all of the charm of its iOS predecessor with the superior control method the Switch allows. It doesn’t last long, but you soon develop a sense that with the right upgrades, skill and patience you could ostensibly train yourself to beat the thing without error. It is a lot of fun trying.

While EarthNight looks and sounds like it could be the product of a bygone decade, the gameplay and structure are very modern