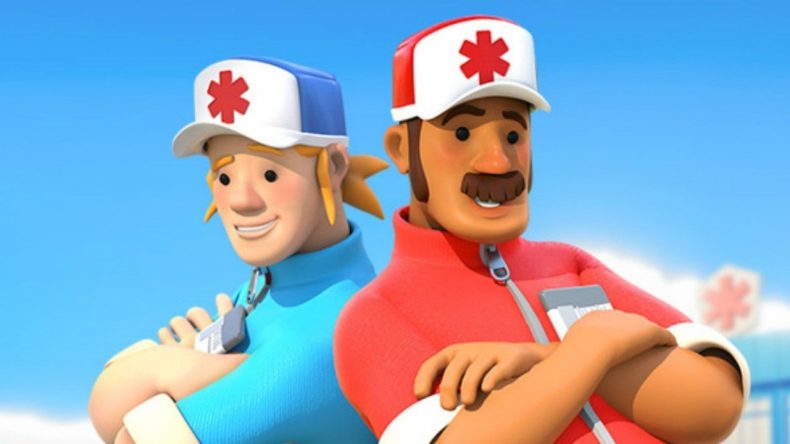 Like in many households with a few kids close to their teens, mine often sees me trying to mediate between a gaggle of demanding hands who all want to play on something at the same time. Despite an abundance of consoles and devices, those hands usually make a grasp for the Switch. My Switch. Naturally, being the sucker I am, that means I don’t get to play it as much as I’d like.

So when I discovered The Stretchers, a surprise release that just sort of appeared in the eShop all of a sudden, I was immediately attracted to the multiplayer element, a chance to play with the kids, instead of stuffed into the 3×3 crawlspace above my wife’s wardrobe where I normally go to play the Switch in peace. The concept is simple. You take control of a pair of somewhat clumsy paramedics who must travel around a quaint little town that looks like something from Paw Patrol, and rescue “dizzies”, that is, men and women afflicted by the actions of the mysterious villain currently lauding it over your town and frying people’s brains for reasons best known to himself. It’s not much of a story, and I think it’s more of a kid-friendly way to have people injured at places like a sawmill and the beach without having to show any actual injuries. There’s a sense that at some point in early development someone was contemplating making a serious game about EMTs and decided to go a different route.

Essentially, The Stretchers is a puzzle game in which you can only ever control one character at a time and must work out how to move the recumbent dizzy from wherever they’ve fallen to the back of the ambulance. When playing alone you can switch between medics, and can use the stretcher each one carries to load up dizzies. Once you have them ready to go, it’s merely a question of avoiding various hazards such as prat falls and conveyor belts to reach the ambulance. Alone, it’s OK. It’s mostly fun but a little infuriating, but played with someone else it’s occasionally hilarious and much more entertaining. Pushing and pulling against each other, using double zip lines and trying to avoid obstacles is a laugh, as are the sometimes insane physics. Between missions you’ll navigate a rudimentary open world where nothing happens, but which at least let’s you drive your ambulance around, crashing through hedges, disrupting traffic, and narrowly missing pedestrians (you can’t hit them, sadly).

Part of the reason it’s so much fun with another person is how ungainly your paramedics can be to control. It’s part of the fun when you’re playing together as you stumble around the place, bashing the stretcher off obstacles and watching the dizzy ragdoll everywhere. However, on your own the experience soon becomes a bit stale – and The Stretchers doesn’t do an awful lot to mix it up.

Some missions will grant upgrades, of a sort, like a new truck, while some will see you gathering resources instead of dizzies, but it’s all more or less the same either way. This isn’t a game built with longevity or replayability in mind; it’s just a fun puzzle game you can play with a youngster.

There’s a charming aesthetic to it all, bright and colourful and aimed squarely at kids, but the slapstick, ragdoll humour will appeal to grown-ups too. It can be frustrating to navigate the maps with a stretcher full of dizzies, but that’s kind of the point. Either way, it’s much more fun to play with a buddy, or one of your kids, than it is to go it alone.

Not much fun alone
Can be frustrating

There's a charming aesthetic to The Stretchers, bright and colourful and aimed squarely at kids, but the slapstick, ragdoll humour will appeal to grown-ups too