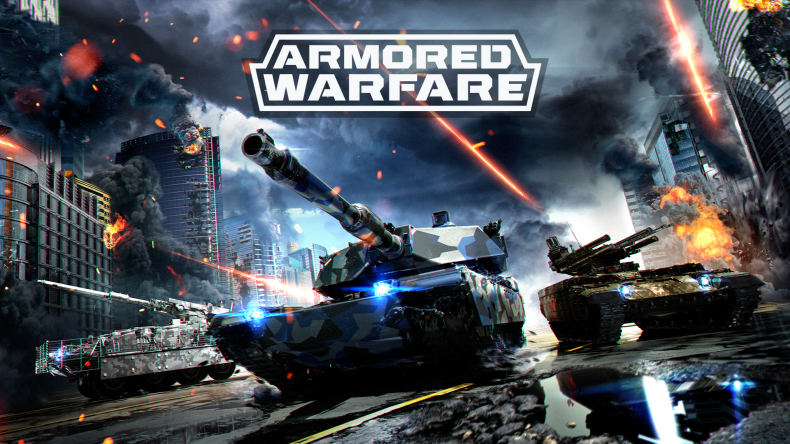 The amount of free-to-play games on consoles has become rather vast in recent months, and other than Fortnite I’ve been ignorant to many others. Games like Skyforge, Warframe, and Neverwinter are some of the most played, but the grind never really interests me. Lazy? Maybe, but the games have to be satisfying as well, and I’ve struggled to get into them due to that. Armoured Warfare came onto PS4 a few months ago, doing well on PC prior to that, but how good is it, and will the slow pace of battle appeal to anyone?

There are two clear sides to Armoured Warfare that’ll either click with you or not. There is most definitely a grind to levelling up and unlocking the tanks and their relative abilities, but the gameplay itself is much slower than many other games. If you’re into tactical and methodical battle, and you’re a fan of spending time in the menus fine-tuning your tanks’ performance by spending credits and unlocking new weapons and items, this is for you. The two types of currency of the game will allow you to purchase new tanks and improve stats, mainly through credits you earn in battle by helping teammates and destroying tanks, as well as completing objectives. Gold is also earned, but you can buy it in the store to purchase premium items such as accelerating the progression of your tanks and unlock premium vehicles. Learning exactly how currency works takes a considerable amount of time, and at first it’s confusing just how the different upgrade and purchase systems work. Spending gold gives temporary boosts to how many credits you earn in game, and you can transfer gold pieces into credits, but until you know what the benefits to both are, you’ll let them build up for a majority of your first few hours. Essentially, credits can be spend on almost everything, and the more you do well in battle, from spotting enemy tanks and damage done, you’ll earn more than if you just drive around looking at the scenery. Completing objectives and performing well also earns you battle experience, and this will help you level up your tanks and vehicles.

Battle experience you earn helps to improve your tank in a multitude of ways, from improving your crew and your commander, unlocking new retrofits like the advanced laser warning receiver (increases awareness of incoming vehicles) and a reinforced ammo rack (increases durability), and improving the stats of the vehicles in your garage. There are tons of vehicles to purchase, and the Dealers in the game sell you vehicles from their own collection which you can build and improve. There are five different vehicle types, or classes in Armoured Warfare, all giving you different benefits from using them; think assault, medic, mage, or hunter from other games. The Main Battle Tank is a beast, and has an impressive range of weaponary. It can be very slow, especially when moving from stationary, but once you have pace it can be the best one to play as. Light Tanks don’t do as much damage, but they are much quicker and are better for moving around the map and firing off quicker shots. My favourite type of vehicle is the Tank Destroyer; it offers huge amounts of firepower, and moves pretty well too. I’m always a fan of getting in there and killing at close range, and whilst its armour isn’t great, or its range, it can be the most important type of vehicle when taking out the enemy.

The AVFs are the most strategic, scounting out the battlefield and highlighting enemy tanks on the map so that your team can go in for the kill. I found few willing to pick this tank, much like Healers in Overwatch, but when they’re in play they are vital to your approach. Finally, SPGs are self-propelled guns that inflict huge amounts of damage to large areas, even if you can’t see the enemy in open space – they do damage even though the opponent is hidden behind a big rock or a building. Every vehicle is different, and there is a great strategical element to the game. Whether you’re playing against other players or the environment, picking a different range of vehicles is vital if you’re going to earn big bucks. It may have taken this long to get to the actual performance of gameplay, but there’s a hell of a lot to learn, and I’ve probably not even scratched the surface. When you’re on one of the many maps, battle becomes intense. You’re having to use your tanks ammunition and strong points to take out the enemy, but nothing can prepare you for that moment when you’re face to face with another vehicle. Due to some slow speeds, wars can be won when one on one with another MBT; sometimes it’ll take too long to move away, so getting the first shot in becomes a scrabble for the fire button. Some of the maps are huge, and also well-designed. There are plenty of obstacles to hide behind, but if you’re on one of the many open maps it’s important to keep your distance. As I mentioned before, there are so many tactics you and your team will need to employ to get the job done. Missions are PvE games that see you and your teammates complete specific objectives like capturing bases, gaining enemy intel, and destroying tanks. Battles and Global Operations offer the best experience – as with any multiplayer game – because you’re playing against real people.

Armoured Warfare on PS4 gives you a lot to learn, and the UI Tutorial does an ok job of helping you to learn everything, but you’re only going to get there if you take the time to explore the menus and read up on what every consumable, ammo type, retrofit, and dealer has to offer. When in battle, Armoured Warfare is a lot of fun, albeit slow, but you’ve got to expect that when driving around hulking tanks of steel. On many occasions, I was waiting in excess of 5-10 minutes to find a match, and this took a lot out of my enjoyment, but getting in there ending up being rather enjoyable. Regardless, it’s a great free-to-play game, with some nice designs and ideas, Armoured Warfare is well worth checking out.

If you're looking for a tactical war game where you're sitting behind the controls of a steel behemoth, then this is for you. There's a lot to grasp, and it'll take a lot of time to learn, but it's worth giving a go.