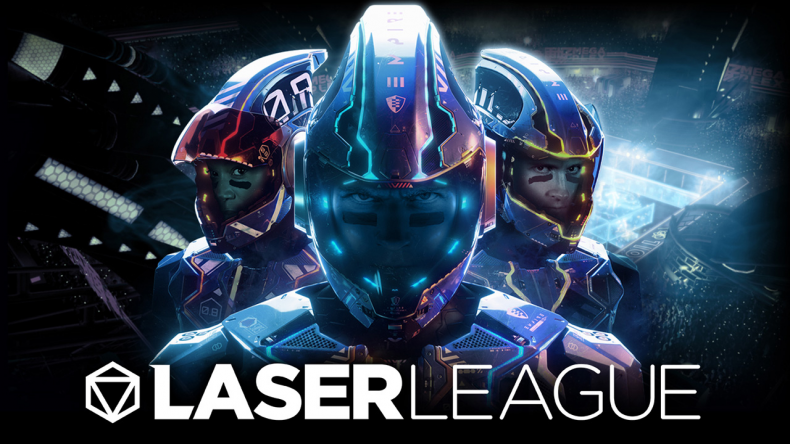 Gladiators in ancient Rome were slaves, thrown into an arena and forced to battle to the death for the amusement of the people. Sometimes fighting against animals, or even in teams, battling it out to secure their lives and if lucky, their freedom. Removing the terrible negative connotations from this, a more up to date version, cleaned up for mass public consumption would probably look a lot like Laser League.

Decked out in garish neon colours against complete blackness, Laser League evokes a strong Tron-like aesthetic wherein fighters of up to four-a-side do battle in a virtual arena. The surrounding crowd, dressed similarly, cheer and shout as the teams commit their plays, take someone out or fall disappointingly. Despite a lack of a pulse pumping soundtrack it’s still easy to get swept up in the spectacle of it all.

Anyway, let’s talk about the ‘sport’ itself. The name Laser League immediately evokes comparisons to that eSport darling Rocket League, but apart from being arena based this is a completely different beast. Two teams enter an arena and fight to take control of nodes that produce laser walls that move around the arena; if a player of the opposite team touches it then they are out until someone revives them. Anyone can revive a downed player, all they need to do is run over the icon that’s left where they fell. It’s a real thrill to weave in and around the laser walls and securing that crucial revive to keep your team in the game. There are six classes to choose from and each class has two modifiers to choose from, every one of these combinations will affect how you need to approach a match. The Blade class for instance can take opposing players out with a slash. One of the modifiers will charge the usage gauge quicker allowing you to use your ability quicker should you miss; however, if you’re more proficient with your accuracy then the second modifier will completely charge the gauge upon a successful attack, meaning you can keep up the offensive, but a miss will result in a lengthy wait for another full charge.

The other classes are fun too; the Smash class slams into opponents with a big shield, it’s not deadly, but the resultant hit flings a player across the arena, time it right and they’ll hit a laser wall and be eliminated. The ghost class can pass through lasers for a limited time, meaning they can effectively dash through the arena reviving teammates.The thief can convert nodes to their team’s colour, Shock stuns players leaving them vulnerable to a wall or an offensive player and finally there’s the Snipe class who can take players out from range, but will need high accuracy to achieve that because the speed at which everyone moves is high. I found I had a tendency to miss a lot using the Blade class, yet found my hit success rate much higher with Smash, although I struggled to knock players into the lasers. But, my favourite class has to be the Thief, following the pathing of the walls, stealing down their length and converting the node as a player encroaches on you and flipping the colour to yours so they get hit never gets old.

As the laser walls move around the arena it can feel a little like playing a bullet hell shooter – weaving in and around the glowing death barriers with the reactions of a cat, but it feels a little too complicated when it’s all kicking off. The player indicator icons are quite small making it easy to lose where you are in the arena when you’re having to watch your own position, the positions of your opponents and watch out for the glowing partitions, then factor in the fact the arena is wrap around and you’ll frequently find yourself on the opposite end of the arena to where you thought you were, and right into a death trap. Laser League’s other problem also seems to be some slightly off collision detection. I frequently found myself touching nodes and seeing nothing happen, or reaching a node at the same time as another player only for them to always be the one who gets it, resulting in me being eliminated. I could mark it down as unfortunate, but when it seems to be constant it gets frustrating.

All-in-all Laser League is good gladiatorial fun, as at the time of writing the servers are a little sparse, with AI bots needing to be drafted in to prop up the player numbers, but as players get to grips with the classes and more people take part this can be a riotous time, although I have to question whether it’d be much fun to watch like Overwatch, League of Legends or Rocket League, because keeping track of what’s going on can be hard for the players let alone the spectators. Laser League has it’s issues, but these are minor niggles in the grand scheme of things, Roll7 have created a game here that deserves the attention of eSports organisers and the audiences that come with them.

The team behind Olliolli try something new and produce a hit, Laser League could well be a new eSport darling.

Laser League zaps onto PS4, Xbox One and PC today