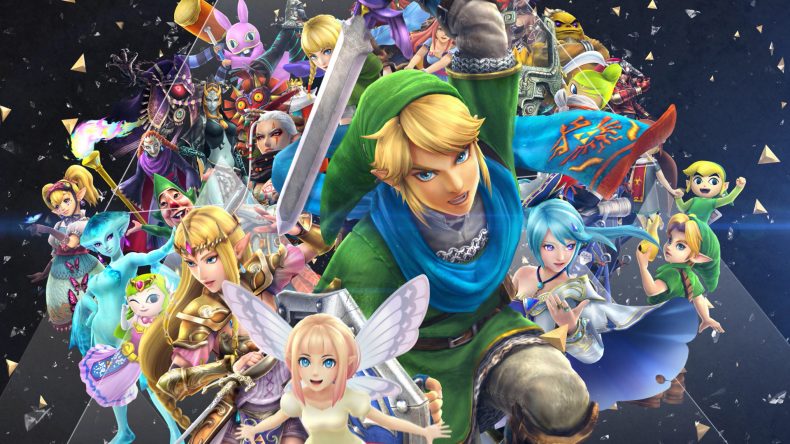 Hyrule Warriors is an important game for a lot of reasons. It not only introduced a huge audience across the 3DS and Wii U to Musuou thanks to the Zelda brand but also was one of the most unexpected crossover games ever. As with most games on the Wii U, I didn’t play much of the original release. When Hyrule Warriors Legends released, I was all in. It wasn’t just a port but the best version of Hyrule Warriors in all aspects but visuals. Now Koei Tecmo and Nintendo are bringing out the third release of Hyrule Warriors and unlike most “definitive editions” out there, this one justifies the name.

If you aren’t aware of what a Musou or Warriors game is, imagine huge battlefields with hundreds of enemies getting destroyed by you in some hack and slash action that makes you feel like a badass. Hyrule Warriors is set outside the Zelda timeline where Ganondorf slowly plots a return after being dealt with a long time ago. The actual story content isn’t anything to write home about but it isn’t throwaway like some other Warriors games either. My only complaint with the story bit is how some cutscenes could look better and how little voice acting there is overall. There is a ton of depth here not just in the strategy across maps but also levelling and weapons spread across so many unique playable characters. When I played Legends on the 3DS, I was blown away by the amount of content let alone the technical feat it was to just have a full fledged Warriors game on the 3DS. This release has all the game modes from both versions which results in a ton of stuff to keep you busy for literally hundreds of hours depending on how much you want to play.

The story is Legend Mode and once you finish the main story that is pretty meaty in its own regard, you can replay those maps in Free Mode with any unlocked characters. All characters are unlocked here for Free Mode from the start as well. A mode I never played on Wii U that wasn’t in the 3DS version is Challenge Mode. This mode allows you to play as Dark Beast Ganon in Ganon’s Fury which is a lot of fun. Challenge Mode also has loads of specific challenges as the name suggests to unlock various materials and weapons in addition to going for a high score. Seeing a release after Fire Emblem Warriors, I was hoping to see every improvement from that release carry over to Hyrule Warriors. Thankfully almost everything is here. The only lacking area is the AI. In Fire Emblem Warriors, I could rely on the AI to some extent to take out or just protect something after moving to a certain location. In Hyrule Warriors, the AI almost feels like dealing with a pet dog or cat. You will need to do most things yourself here. Switching on the go is however a great addition from the 3DS release here.

Unlike Fire Emblem Warriors, there are no visual modes here. When you play docked, Hyrule Warriors: Definitive Edition runs at 1080p with a 60fps target. The frame rate is mostly fine but there are various instances of stutter that occur randomly. This even affects some cutscenes. Hopefully future patches allow for a performance or visual focus like Fire Emblem Warriors or a fix to this stutter. On handheld, the game targets 720p and 30fps and this experience is a lot more consistent for me. In fact I ended up playing a lot more handheld than docked for Hyrule Warriors. This is also probably the best portable Warriors game ever right now. I’m a big fan of music from The Legend of Zelda franchise and I love the remixes and arrangements here. I will never tire of the Hyrule Field theme from Warriors. One area that was disappointing is the voice acting. Narration is nice but I was hoping for a lot more lines voiced in the game. It feels lacking compared to how much effort and polish went into the rest of the game.

While local co-op with single Joy-Con support is a great addition, I was hoping this release was see online co-op added in. The other disappointing area is the fact that the only representation of one of the best games in the last few years, Breath of the Wild, is just two costumes. They should have at least done a stage for the game with bokoblins, guardians, and the like.

Over the last few years, I’ve played my fair share of Warriors games. Until last month, Dragon Quest Heroes II and Fire Emblem Warriors were at the top of my rankings alongside Samurai Warriors 4. This changes now because Hyrule Warriors: Definitive Edition is the closest to a perfect Warriors game for me and it is also a damn fine game in its own right. While I would have liked a more consistent experience docked and an online mode to play with friends, there’s no denying just how much fantastic content is packed into this single release. It is of course a port on paper but a superb one and a game every Zelda fan and Warriors fan needs to check out.

A superb portable Warriors experience with a shocking amount of quality content packed in.