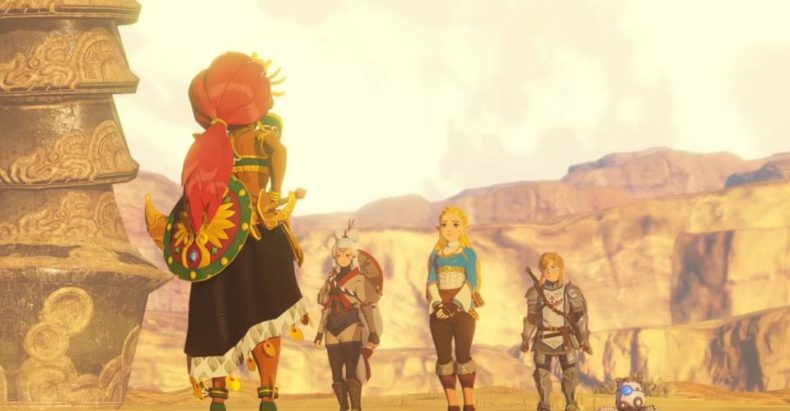 The original Hyrule Warriors was a love letter to long time fans of Zelda, full of references to the history of the series and characters spanning generations and timelines. Getting to play as your favourite character, be that Tingle or Zant, was an absolute blast and made it one of the most exciting Musou games to date. Now to finish off 2020, we have another Koei Tecmo and Nintendo crossover featuring Link and the gang that is completely different to its predecessor.

Hyrule Warriors: Age of Calamity is a prequel to everyone’s favourite launch title Breath of the Wild. Set a hundred years before the original game, Hyrule is in turmoil as the Great Calamity is imminent and the awakening of Calamity Ganon along with it. Link and Zelda are tasked with gathering the champions of the land and asking them to pilot the divine beasts in the hope that the impending disaster can be prevented with their combined power. The story is told in fully voiced cutscenes, and so far is entertaining and incredibly epic.

I was lucky enough to be able to play the first two chapters of the game for this preview, which begins with the hour long demo available for anyone to try on the eShop. After being reintroduced to the universe of Breath of the Wild and its inhabitants, I was flung onto the battlefield as Link, defending Hyrule Castle from incoming Moblins, Bokoblins and other nasties. As with any Musou game you’ll be facing thousands of enemies on any given mission, using your combos to send bodies flying and defend the land from evil.

The system of light attacks and strong attacks returns from previous games, with each character utilising a different move for each combination of Y and X. Alongside your standard destructive combo, you’ll also be slowly building your special attack gauge with every strike ready to unleash screen clearing attacks at the push of a button. 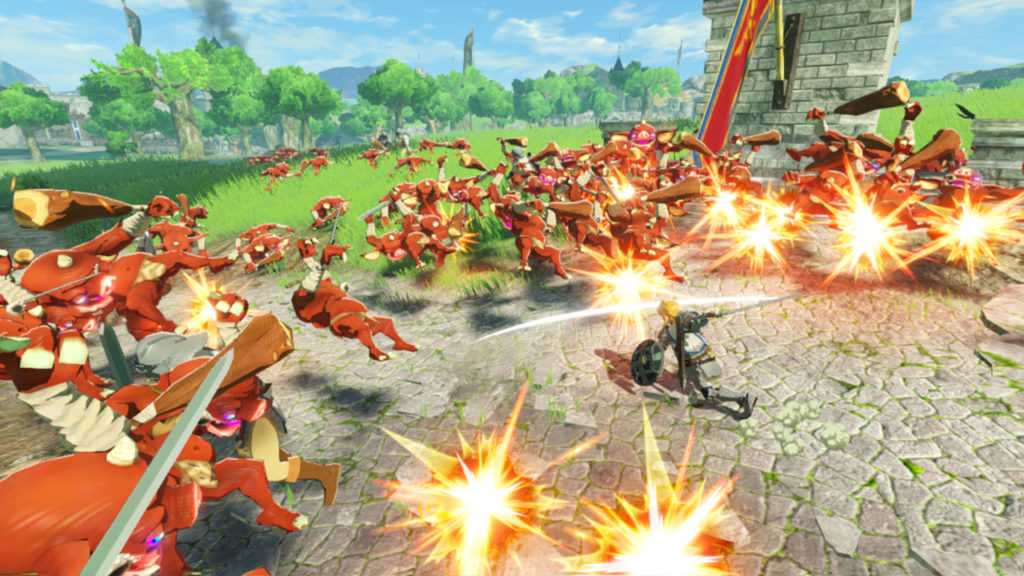 Alongside the cannon fodder, there are also enemy captains scattered throughout the battlefield that put up much more of a fight. If you can carefully dodge their offense they’ll become vulnerable, and if you’ll get the opportunity to deal damage to their weak-point gauge. Once this has been depleted you can unleash a massively damaging weak-point attack that will dispatch all but the most powerful foes.

All of this will sound familiar to anyone who played one of the many versions of the original game, but plenty of combat options have been added to make Age of Calamity feel fully embedded in the world of Breath of the Wild. One of these is the ability for each character to use the Sheikah Slate, and it’s recognisable powers of Magnesis, Bombs, Stasis and Cryonis. The number of ways these powers can be used is frankly incredible, with each power interacting with objects, environments and enemies in different ways. You can fling boxes or even enemy projectiles back with Magenesis, blow up rocks with bombs, and freeze legions of enemies standing in water with Cryonis. Effectively and creatively using your Sheikah Slate will really help you deal with the hordes of enemies, and might even reveal a secret or two.

Another addition to your arsenal for Age of Calamity are the elemental Rods used by Wizrobes. As long as you’ve gathered enough charge for them, you can unleash fire, ice or electricity at your enemies at any time. Certain enemies will be weak to a particular element, so ensuring you have enough power in your rod for an unexpected powerful opponent can really turn the tide of battle for you and your allies.

So far in Hyrule Warriors: Age of Calamity, I’ve been able to play as the three characters from the demo (Link, Impa and Zelda for anyone who hasn’t had chance to try it yet) and the four champions. Out of this current cast of 7, every single character has felt fully fleshed out and had their own unique abilities and skills. Link is a great all-rounder for you to get started with, but his allies were the ones I really enjoyed learning the intricacies of. For example burly Daruk of the Gorons is slower than most characters, but has an impenetrable shield and the ability to create and explode magma rocks at will. My favourite member of the party so far though is the Zora Champion Mipha. This scaled Princess is can conjure vortexes of water to send foes flying, and create fountains which she can teleport into and launch even more deadly attacks in the process. I’ve never played a Warriors game with characters that feel this varied before. 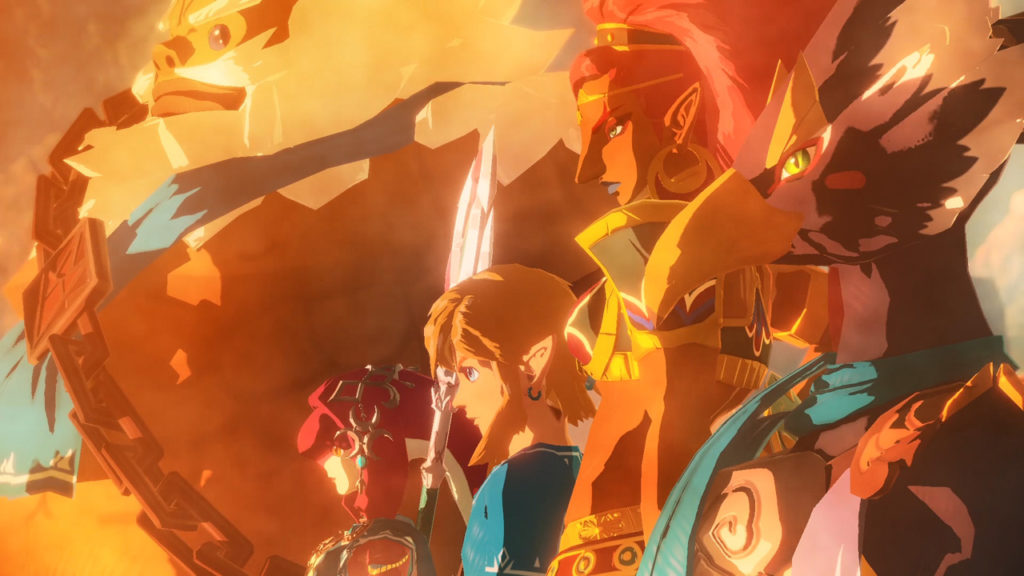 When recruiting the champions in the second chapter of the game, the sheer number of enemies means that you’ll be required to pilot a divine beast to take down the incoming wave of baddies. When riding one of these mechanical titans you’ll be in the cockpit with a first person view, and have access to a range of weapons to destroy thousands of tiny specks at will. You’ll need to destroy foes launching projectiles first, counter bigger attacks, and fire your super attack laser to level the playing field. These sections have only lasted a couple of minutes a piece so far, but provide a nice break from fighting at ground level and are really satisfying.

Outside of the combat gameplay, you’ll be greeted with a world map of Hyrule packed full of side quests and services. Many side quests are requests from the occupants of Hyrule, asking for a selection of items in exchange for unlocking a new store or combo for a character. Other side missions require you to complete a battle, often with a specific objective like killing 500 enemies, or using bombs only.

There are variety of fully fleshed-out systems you’ll need to delve into to ensure you’re characters are strong enough for the trials ahead. The Blacksmith offers the ability to fuse weapons you find together, boosting their attack and combining bonus effects. You can also pay Rupees to level up your characters at the Training Camp, ensuring everyone is strong enough to join you on missions.

I’ve only scratched the surface of Hyrule Warriors: Age of Calamity here, because there’s simply so much to talk about packed into this delightful crossover. You can play the whole game in co-op mode locally, there’s Amiibo support, and a whole host of secrets and features spread throughout the game so far.

After my time with Hyrule Warriors: Age of Calamity, I’m confident that this game will be something special and desperate to play more. Whether you love Breath of the Wild or Musou games, Age of Calamity offers an engaging story, deep upgrade systems and the best gameplay in the genre to date.