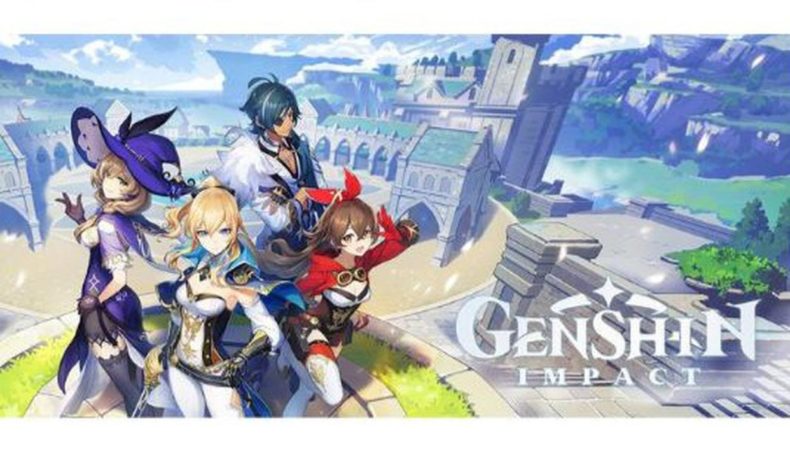 It’s hard to hear the phrase “Free to Play” without wondering how much fun a game will bring if you choose not to spend money on it. There are countless examples of titles that attempt to squeeze every last penny out of their player base, relying on “Whales” to spend ludicrous amounts of money so they can progress further into the experience. Although these practices are sadly common in the F2P world, there are games that break this insipid mold and provide hours of content even to players unwilling to dip into their wallet. I was intrigued to see which direction Genshin Impact would go with its business model, especially as it features a largely solo campaign.

You begin Genshin Impact choosing one of two twins. The other is immediately captured by some sort of god, and you’re dropped into the fantasy world of Teyvat. Your twin of choice has no idea what the deal is with this mysterious land, but soon embarks on an epic adventure full of dragons, chests and powerful friends you’ll meet along the way. 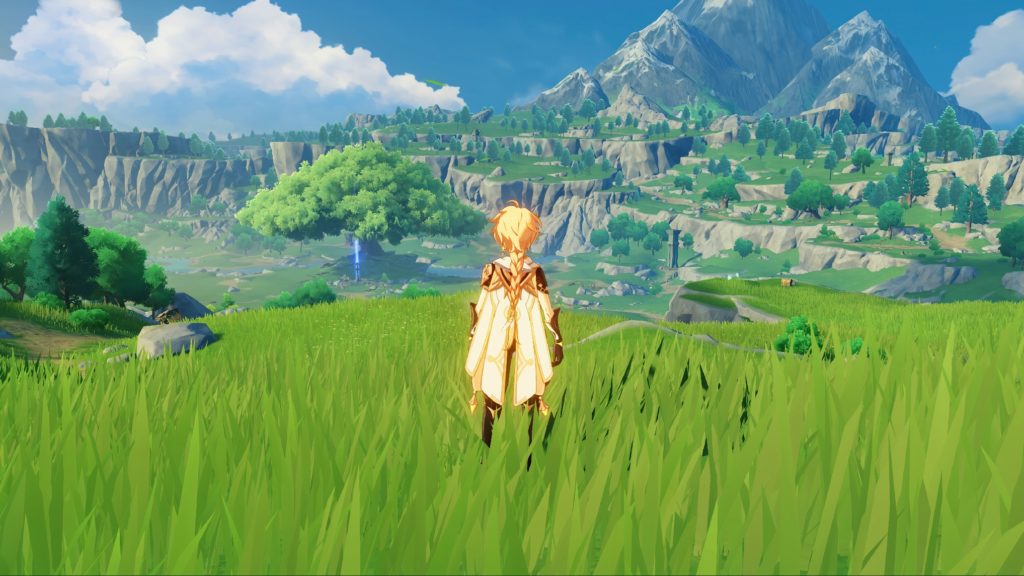 The immediate comparison that you will undoubtedly make upon starting Genshin Impact is to Breath of the Wild. MiHoYo themselves have talked about how much it inspired this open world RPG, with its engaging exploration, stamina-based climbing, and gliding mechanic. There are certainly worse games to be compared to though, and getting to experience the joy of discovering something new in every corner is even more impressive in a game that you can play for free.

You’re introduced to the game by being tasked to complete 4 dungeons, each focusing on the powers of a different character the game gives you. Your first character uses wind powers to dispatch foes and solve problems, but you’ll soon have access to fire, ice and electric pals each with their own unique attacks. Puzzles are often solved by using the right element on the right object, but the element system goes even deeper in combat.

Every character in Genshin Impact plays completely differently, with your initial group of 4 bringing swordplay, archery and magic to the party. You’ll soon learn to use the best character for each situation, as you discover the weaknesses of each fantasy foe. Setting an enemies wooden shield alight will ensure you can dispatch them with ease, whereas freezing a liquid based foe makes it easier to ignore while you batter its friends. 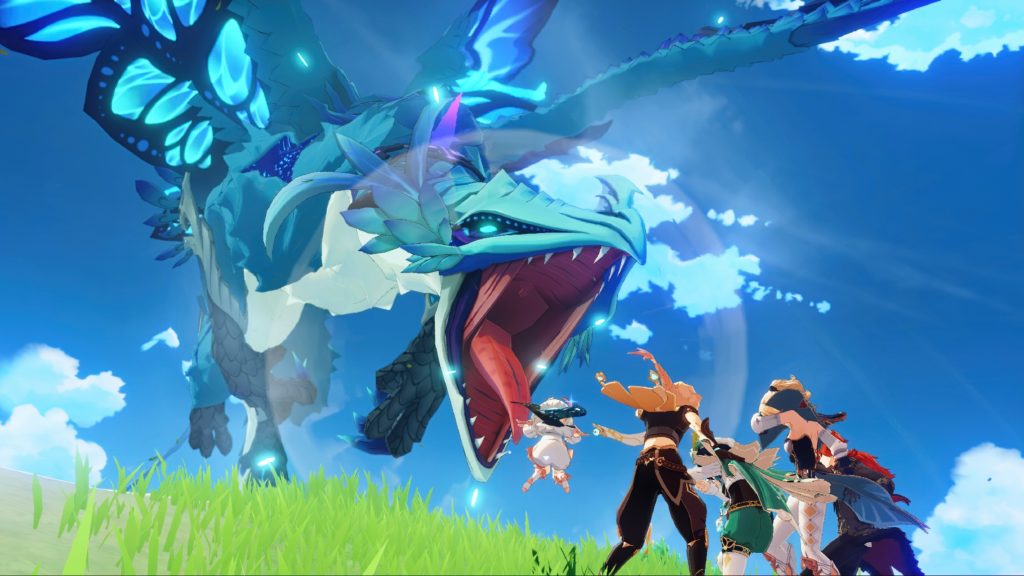 The elements also interact with each other in interesting ways. This can be as simple as shocking a soaked foe, or as complex as causing an electrical explosion by electrocuting a burning baddie. You can switch characters at the press of the dpad, meaning it’s easy to perform sick elemental combos. The elemental effects can be applied to the environment too. Using a well-placed flaming arrow to create a wall of fire leading to an explosive barrel is intensely satisfying every time you do it.

You’ll be given a range of interesting missions to complete when you fancy a more focused experience, made all the more enjoyable by the incredible English voice acting that brings the characters to life. Quests that focus on a specific one of your party members tend to be the most memorable, as you get to know more about your allies while chasing down enemies or competing in cooking contests.

When you run out of quests to complete, you’ll need to head out into the open world to raise your adventure rank and unlock more. As well as finding loot to help you level up and upgrade your items, each chest you open or fast travel point you activate gets you closer to the next set of quests. The world is jam packed with interesting environmental puzzles and camps of nasty orcs, and I never felt bored with the range of activities to enjoy. You might find a set of glowing critters that when grouped together form a gust of wind to propel you to a chest, or a statue that when worshiped raises your overall stamina. 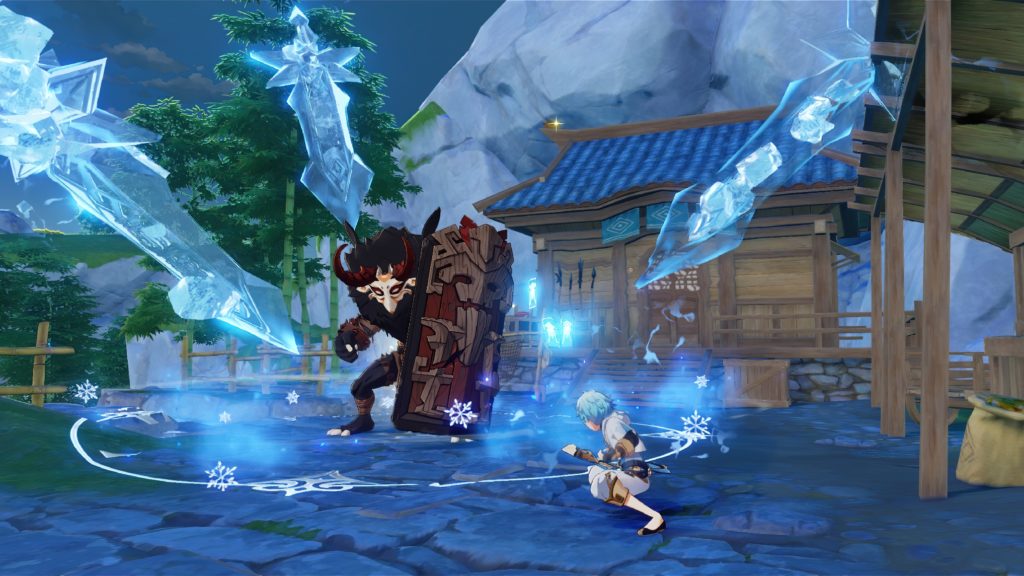 When you need to power-up your party there are plenty of upgrade options you can take advantage of. Leveling up can be accomplished by pumping adventure manuals into your team, whereas ore is needed to sharpen your swords. You can also cook up a storm to improve healing items and gain buffs, and even equip sets of accessories to gain interesting effects.

All of these systems are incredibly enjoyable early on, but as you progress further, the amount of items you’ll need to upgrade becomes an issue. Features are unnecessarily locked behind reaching a higher adventure level, and top tier loot can’t be gathered without dipping into your wallet.

One feature locked behind hours of playtime is multiplayer. After reaching adventure rank 12, you can invite others into your game. Each friend you bring in controls one of your character slots, and can help you batter the tougher bosses of the open world. Unfortunately a lot of features are unavailable when playing with pals, and the invited players especially get very little benefit for joining you on your adventure. 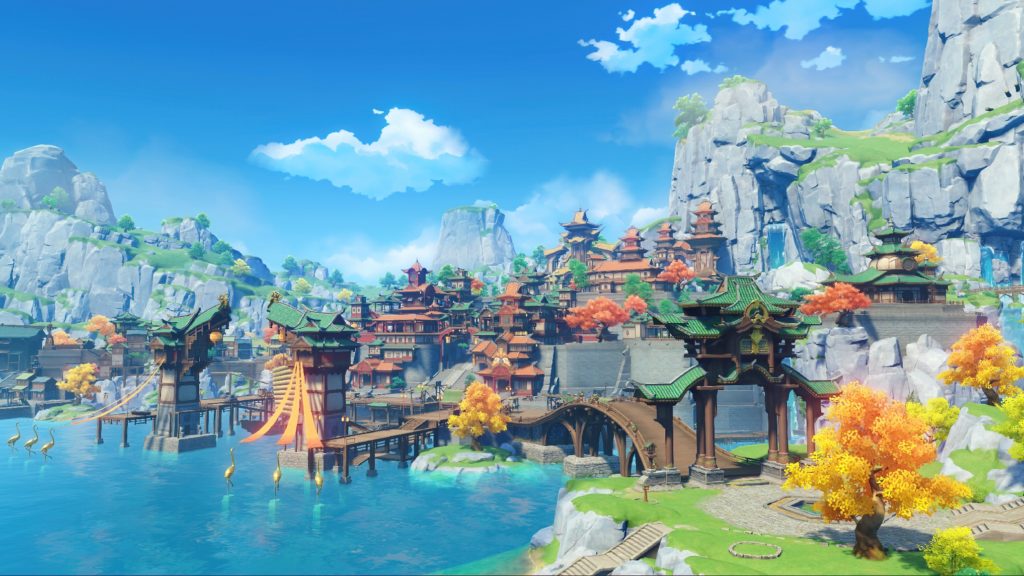 You can experience hours of entertainment without spending a penny, but late game enjoyment is difficult to come by unless you want to empty your bank account. Weapons and characters can be unlocked by spending currency to Wish for a random unlock. You’ll be able to afford the occasional lucky dip as you play, but when you get a weapon for a character you don’t own it’s pretty frustrating. There are some systems in place to ensure you don’t get shafted too badly if you buy 8 booster packs in a series, but with the rarest items having a 0.4% drop rate you’d have to get incredibly lucky to get the ones you want.

Another issue I had playing Genshin Impact was in its technical performance. I had a lot of frame drops in even quiet areas, despite playing a smartphone game on my PS4. It is a gorgeous looking game, but I never felt it was particularly pushing the hardware to its limits.

Genshin Impact is an incredible open world RPG to have access to for free, but its stingy late game loot model prevented me from playing as long as I’d have liked. If you wish Breath of the Wild had more loot and want to experiment with some elements, Genshin Impact is a hugely satisfying experience with deep RPG systems to invest in.

With a dense open world inspired by Breath of the Wild, Genshin Impact provides hours of free entertainment with its rich combat and deep RPG systems.