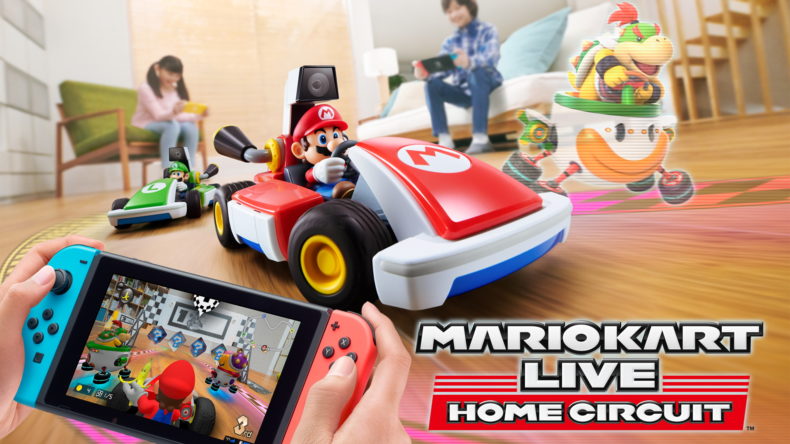 Can you remember the last time playing a game made you self-conscious? As an older chap writing about games, long gone are the times I’d be embarrassed by the hobby I love, but Mario Kart Live: Home Circuit made me very aware of my actions and how I was presenting myself. Downloading the free software and connecting the shiny new Mario Kart to the system, I became acutely aware of a childlike glee emanating from my person. I was smiling, and not like adults smile, it was unabashed, sheer joy, completely unbridled and without inhibition.

My wife turned to me and said, “You really like this, don’t you?”, and I stopped and asked why she was saying that. “Well, you’re smiling from ear to ear”, she informed me. And I was. Crashing around my lounge and making my dog bark at the miniature Mario Kart whipping around his paws, crashing into the dinner table, and the chairs, then laughing while my wife repeatedly drove Mario into the door (three times, she just didn’t seem to understand how Karts work), it’s joyous, and it’s the best implementation of augmented reality I’ve seen to date.

The funniest thing is how simple it really is. On a basic level this is a remote control car, only the Switch is the controls. There’s a camera mounted on the USB-charged Kart and the feed is used as your behind-the-back viewpoint. It feels like you’re going incredibly quickly, but if you look away from the screen, it’s actually a perspective trick that suggests speed when in actuality the Kart isn’t going that fast at all. 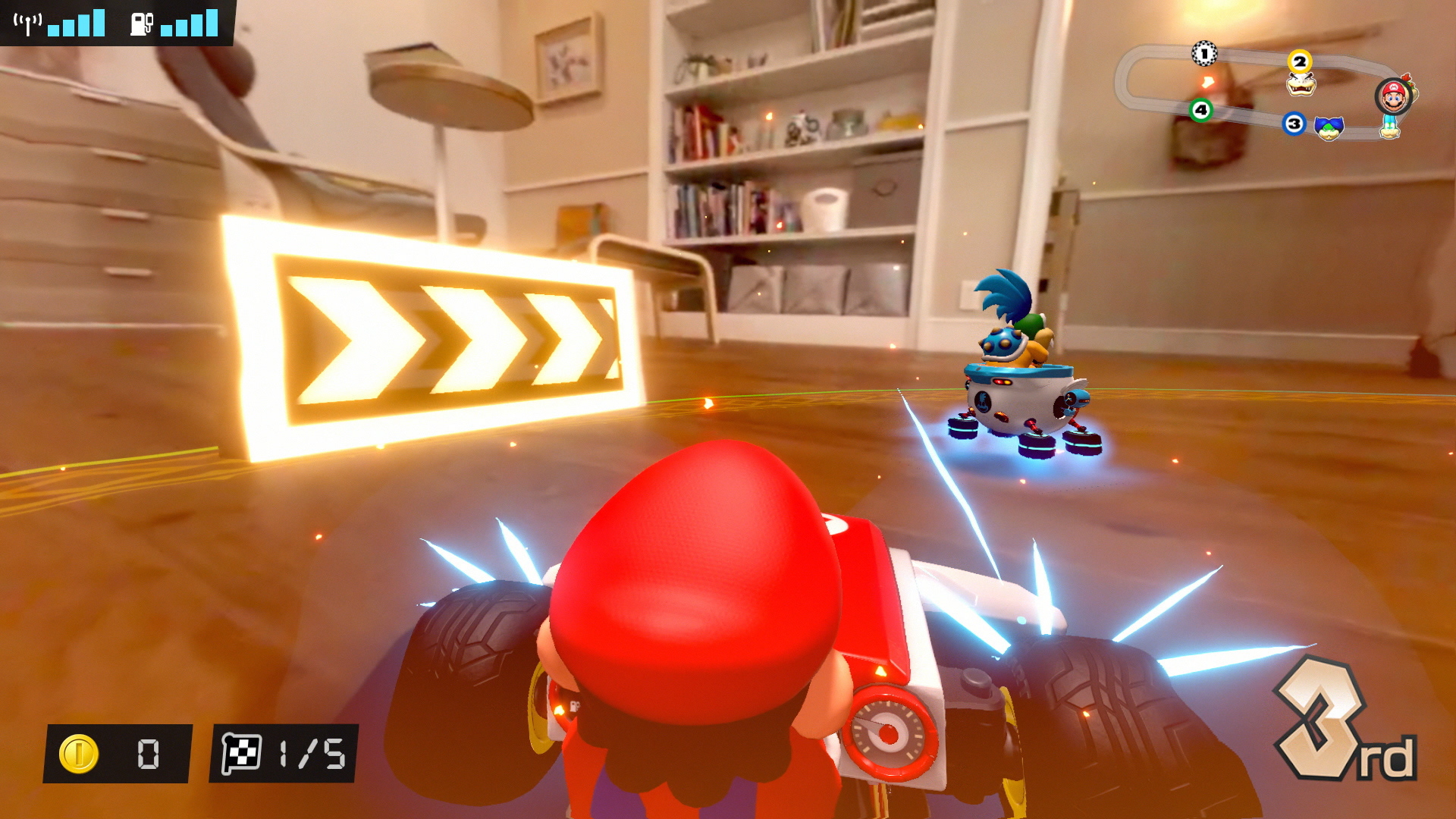 You can drive at 50cc and 100cc to begin with, with faster speeds unlockable as you play, and while there’s a free roam mode, the idea is that you build your courses with the included four gates, drive around the course to make the racing line, then either race off against your family by passing the controller to complete time trial runs, or do Grand Prix events which augment the races with different settings and have you face off against AI racers who follow your created racing line.

In truth, this is a game limited by imagination and how much fun you find it in the first place. I was suddenly imagining a huge course with extra home-printed gates to extend the fun for longer laps. I was envisioning jumps and ramps, under-the-sofa and out the other end, out the back door into the garden on tiles I’d laid out, and more. Jumps are possible, for the record, but you have to set them up after the course has been drawn, because you can’t lift the Kart in the air when running the course for creation. Also the game suggests you don’t go outside with it, and it does struggle on ramps at certain speeds and elevations.

I found the Kart was fine on carpet too, for what that’s worth, but on wooden floor it was easier to control and a little faster. You really don’t need as much space as the ads suggest, either. My lounge is full of furniture and I managed to make a small course that went under the dinner table; and in fact, adding obstacles makes it a little more interesting than a dull old figure of eight track, or a circle. 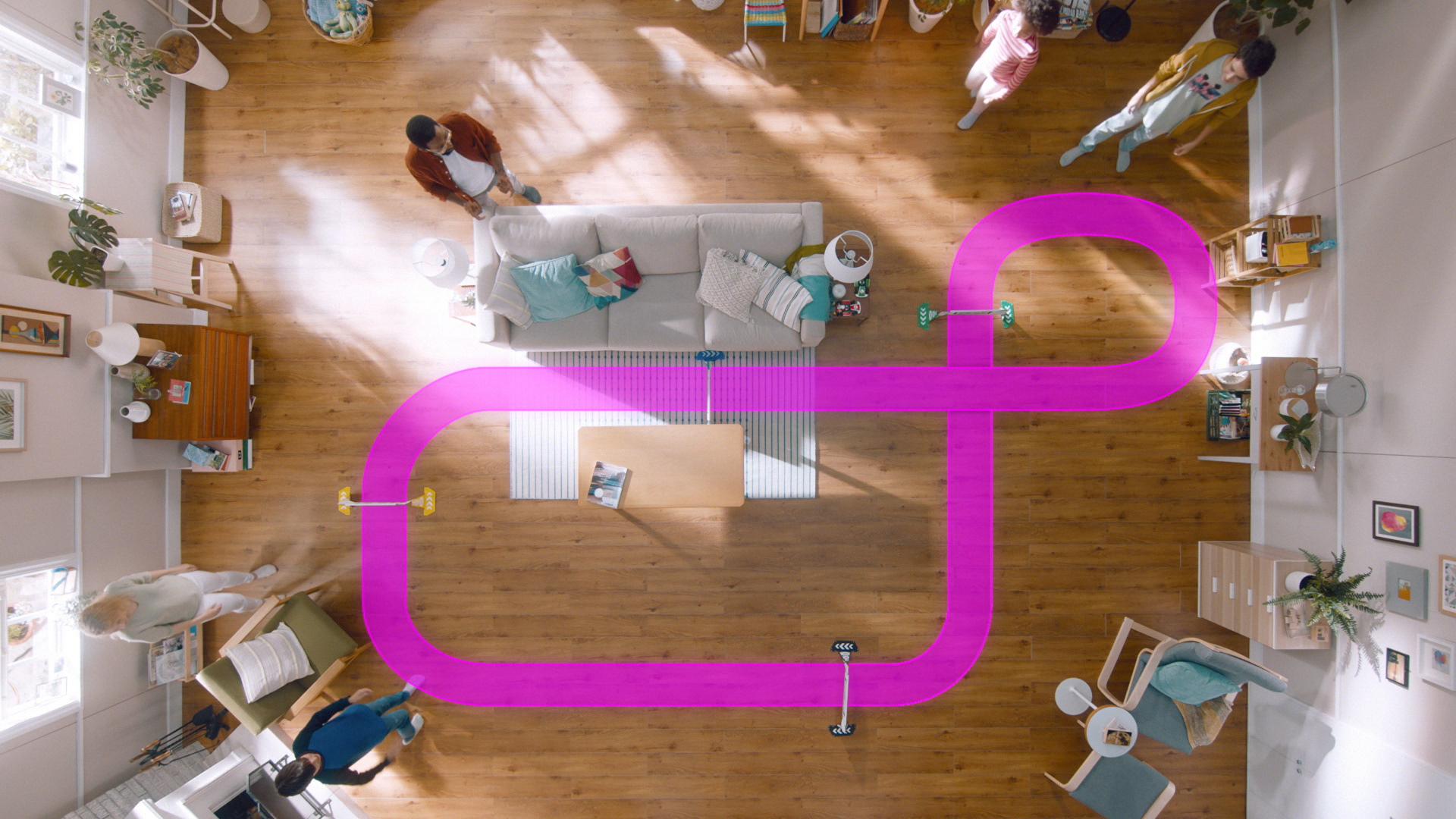 Each gate has a QR code on it that the camera is reading, and these can be adjusted so that when you go near the gate you have boosters on the floor, item boxes, etc: you know, just like a Mario Kart race. Grabbing a mushroom allows you to hit the left bumper and it’ll give you a short sharp burst of speed. Yes, that’s right, the boosts and mushrooms do actually boost your Kart. You can also use drift on the right bumper, but to my eyes this is more of an instant full lock to the steering which, I guess, is partially what drifting is, and certainly the most you could expect of a setup like this.

It all works based on Wifi and I got a good 9-10 meters away from the undocked Switch before it started to glitch out even slightly, but your mileage may vary based on your devices and how good your Wifi actually is. Docked play means you’re tethered on the spot, but it does mean you can see all the fun on the big screen. There’s a leveling system here as well, which amounts to coins that unlock cosmetics. There are costumes, Kart skins, the usual fare, and it’s pleasant enough and a good reason to grab coins as you play. 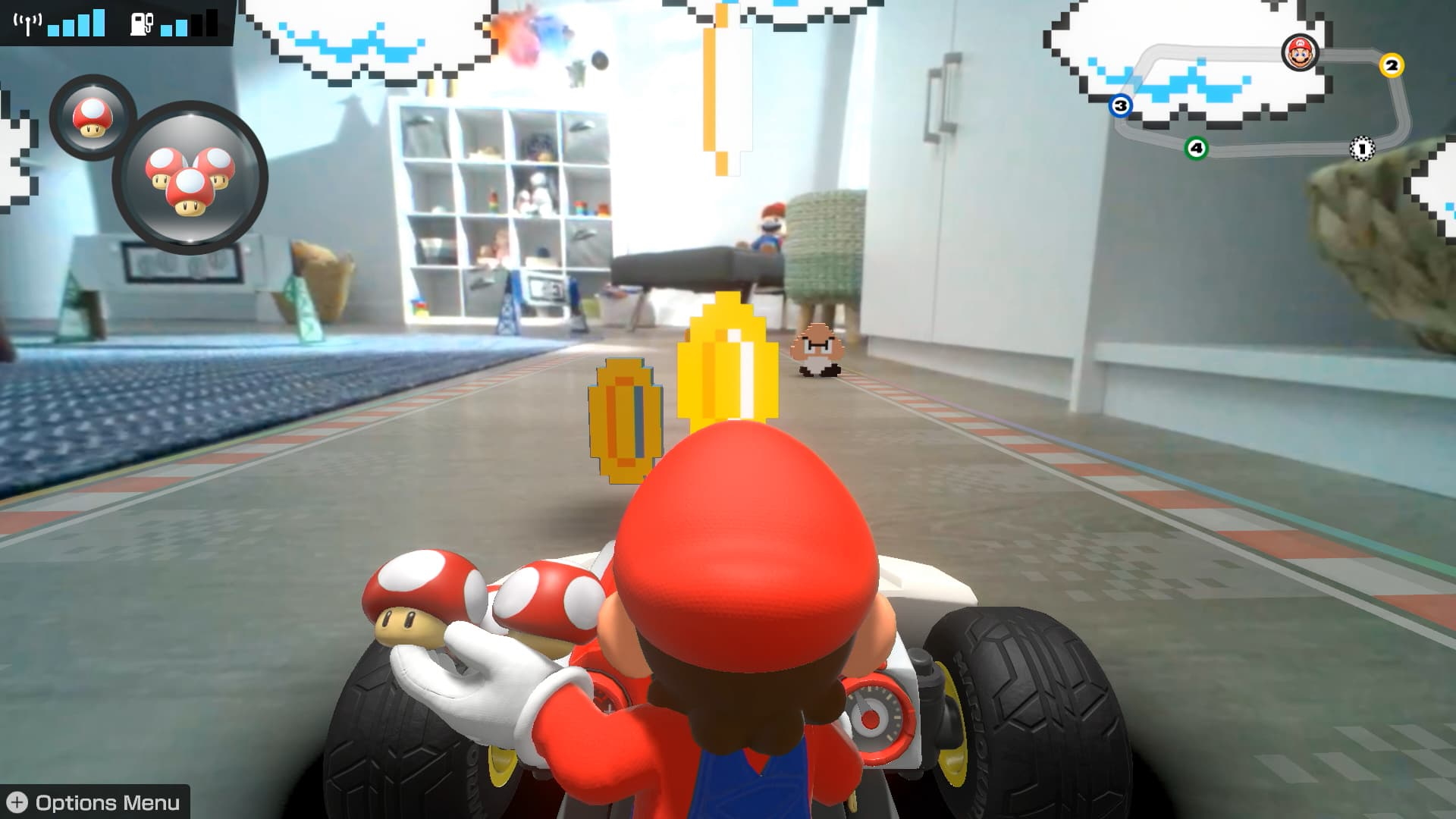 I guess that all brings us to the final question of whether you should put down just shy of £100 on Mario Kart Live: Home Circuit. It’s a tricky one because it’s a lot of money for, if I’m honest with myself, an incredibly cool novelty that hits harder for me because I was the poor kid who had a wired “remote” controlled car. It feels like magic, it got my kids off their games and had them share a moment with us I thought might never happen again. My wife enjoyed it, the dog eventually stopped barking, and it just seems like a lovely time, with endless opportunity to jump in front of the camera or make an obstacle with your body.

If the things I’ve described – the joy, the fun, the dog annoying – appeal to you, then I’d say it’s absolutely worth it. If you think you’ll whip Mario out and drive him round a car park, or make courses in your house regularly, then again, it’s worth it. It’s a novelty, and it’s incredibly expensive for multiplayer (you’ll need two packs), but it’s also the best use of augmented reality I’ve seen: it properly works, and I love it. I’m so glad Mario Kart Live: Home Circuit exists, because I needed the smiles it gave me, and if I don’t play it again, I’ll still think fondly of the time I spent with it, and sometimes making memories is the most worthwhile thing of all.

Fantastic fun
Best AR in a game yet
Works brilliantly

Mario Kart Live: Home Circuit feels like magic. It's expensive to play multiplayer, but if your imagination (and house) is big enough, there's plenty of fun on offer.