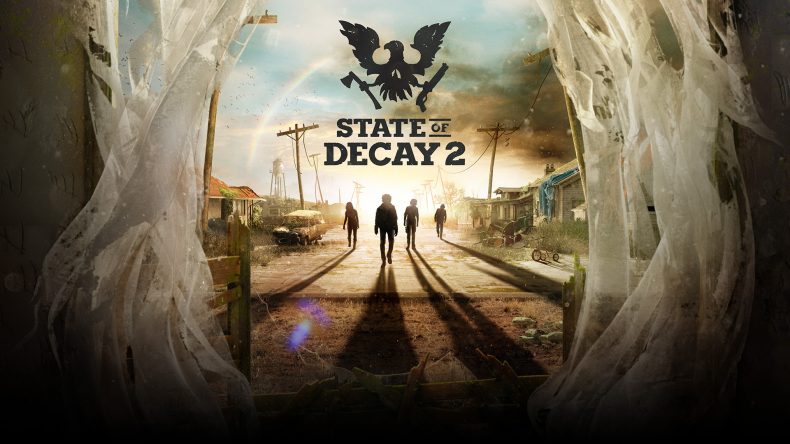 There is a weight of expectation on Undead Labs. Their debut game, State of Decay was released back in 2013 to largely positive reviews, all praising its ambitious but unpolished take on survival in a zombie apocalypse. Fast forward five years, and that same experience returns, this time with the option for four-player co-op, but despite the ambitious nature of the game, a sequel also carries with it the assumption that it will improve upon the original in nearly every way, from story development, to improved stability and presentation. The first game was one of grand ambition – a game where your choices have permanent consequences; take your eye off the management of your community for too long in favour of pursuing another goal and you will likely pay for it with the loss of a valuable member of your community. Similarly, spend too long levelling one character at the expense of others and you will reach a situation where, should you lose that levelled character, you are starting from the bottom again in a world that has already changed and adapted to the decisions you made prior. In this respect State of Decay 2 offers more of the same, albeit now with a co-operative element, and it is this similarity with the first game that is both its biggest accomplishment and its biggest downfall.

Like its predecessor, State of Decay 2 is less about zombies and more about building a community through co-operation and support of fellow survivors. It’s a game where not only the core skills for survival like stamina, fighting, shooting and wits are valued, but also where more specialist skills contribute to the health and well-being of the overall community too: physicians to develop medicine to heal and cure survivors, mechanics to upgrade vehicles to Mad Max style levels, gardeners to help nurture and grow food resources, chemists to research and develop explosives and even musicians to bring beauty to the world and increase morale. Each member adds their own unique skill that gradually helps to build the health of the community, and improve the survivability of the individual members in a world of decreasing resources. You begin by choosing the first two survivors from which you will build your community. Each pairing has a little back story as to how they are together that adds a bit of history to your group. From there you meet up with two other survivors and head off to one of three locations where you will set up your community. The game consists of heading out to search other locations for supplies with which to keep your community safe: food, medicine, building supplies, ammo etc. Within your base you also have areas where you can set up new stations, for example a medical bay from which you can make bandages or (providing you have the right skill) increase the health and survivability of your team. Gradually, over time as your skills increase and your community grows you can move to another location that offers you more spaces to build different types of station: a gym, a sniper tower, perhaps a brewery to increase morale. In this sense, there’s no real evolution from the first game, the only discernible difference is the addition of co-op.

While co-op is a welcome addition to the core gameplay, the implementation of a host tether makes the experience feel more restrictive than it should be. During your time building your community the game is constantly nagging you with tasks that all have the status urgent attached to them: a leak has happened in the storage unit and some of our food stocks have been ruined, a neighbouring community that we aren’t on good terms with has broken in and stolen some of our ammo reserves, another zombie infestation has appeared close-by and our chances of being attacked have increased, a neighbouring community is asking for help, a member of our team has had a fight with another and is threatening to leave. Keeping on top of all the things that need resolving right now, as well as trying to push forward with some of your longer term goals means that there is a delicate balance between fire-fighting and pursuing future ambitions. By having a co-op experience where your friend is working on re-stocking your supplies, while you are out clearing an infestation or scoping a new base would go a long way to resolving the feelings of irritation that these never-ending requirements start to throw up, that isn’t the case, here. Upon joining, your partner will warp to your location and is forced to carry out the same mission as you are currently engaged in which certainly speeds the process up, but does nothing to negate the fact that everything must be completed by yourself, despite you having a base full of capable individuals you could delegate tasks to. Furthermore, the co-op experience for the joining player currently suffers from frequent frame-rate issues which pause the play for a fraction of a second, a situation that can have disastrous consequences when combating a horde. In single player, this focus on one issue and one issue alone compounds the feeling that progress is painfully slow. You can’t delegate tasks to other community members and you can’t switch characters on the fly, meaning if you are out on a mission and you get notification that your base is going to be under attack, you will need to return with that character, either abandoning the mission entirely, or pushing it down the list of priorities. After a while it all adds up to feeling like all you are doing is fighting fires and barely surviving, rather than doing anything meaningful towards building a legacy. And then there are the visual glitches with zombies floating in mid-air, seemingly held up by an invisible force, or zombies rubber banding across the map until they settle on their final position, and that is before we even get to the technical issues that stop progress altogether.

In my most advanced community, I have constant messages flagging up that my people are exhausted because there are not enough beds for everyone. My community is currently six strong in a base that has six beds, and why my team are not using those beds is a mystery to me. My community is also suffering a continuing lack of food despite the base having a garden where food is being grown with a specialist gardener to attend to it, a kitchen where I can manage food rationing, and an outpost that has been set up to supply my base with food on regular basis. It is like the work I have been doing to resolve these issues is not being registered by the game. Furthermore, I have two car parking slots with two cars currently parked in those spaces, but in my base management screen it tells me there are no cars there at all, so I can’t upgrade my vehicles, despite having a specialist mechanic in my community. In addition to these apparent glitches, I am also in a situation where I cannot upgrade my command post any further as I do not have the requisite skills within my pool of people to do so, and the constant messages about exhaustion, lack of food and increasing infestations means I haven’t the time to go out and look for a new member who does have those skills and thus make things a little easier.

At present I am facing an insurmountable wall to my progress, so much so that I am contemplating scrapping the save file and starting again. On top of all that the dark is ridiculously dark. I’m all for the idea that being in the dark is… well, dark, but even with the gamma way up and a torch on, it’s simply too dark. Speaking of the torch, my co-op partner suffered glitches where his character’s torch seemingly glitched through his clothes, casting bizarre jagged shadows and making it even harder to see where he was going. Somehow I don’t think that level of relentless difficulty is quite what the developer intended.

Ultimately, my overwhelming feeling with State of Decay 2 is of disappointment. The idea that individual members of the community can grow to become legends is an exciting idea, but at present feels unfulfilled. The co-op could add another level and to a certain extent it does, but a game should stand on its own as a single-player experience also. In the first game there were some mild story beats that kept the game play moving forward and having some meaning, but here these seem to have been eradicated in favour of the sole goal of creating a legacy, and that makes the core game play loop feel repetitive and aimless. That loop is then further compounded by the incessant demands that require your specific intervention, and glitches which are significantly impacting my ability to progress. There is still ambition in State of Decay 2, and there is certainly something that could keep players coming back, however it currently feels like a game that is still brimming with the potential of the first one, but at best is as unpolished as that one and at worst unfinished.

A mainly disappointing sequel, with some glitches that hinder the progress and the fun.

You may also like
state of decay 2Undead Labs

12 Tips to Stay Alive in State of Decay 2