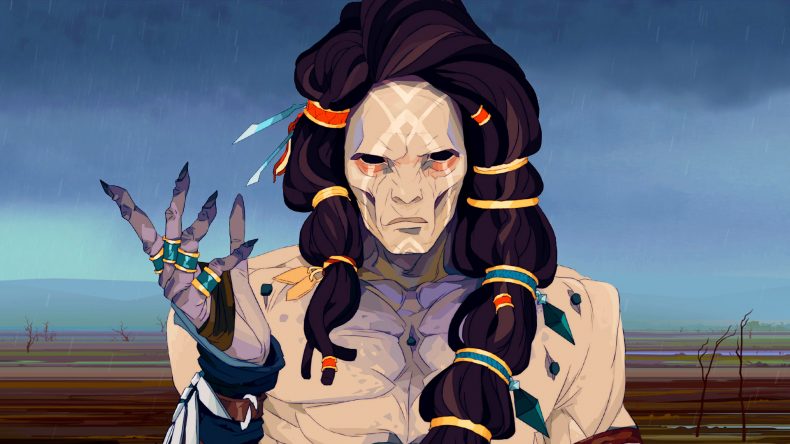 I always find it a little bit odd in fantasy stories like the one in Ash of Gods: Redemption that people who deal with dragons and magic and curses on a daily basis steadfastly refuse to believe in very specific things like, I don’t know, the resurrection of an ancient evil, for example. “The Bogmonsters have returned? Pull the other one – they’re not real!” they cry, whilst literally using magic to clean the dragon blood off their mithril underwear.

It’s for the audience’s benefit, of course, in that it gives us something to relate to in our boring old, decidedly enchantment-free, world. But it’s still trite. If just once one of these vaguely Western European-slash-Dark Age British civilisations was actually prepared for the second coming of the Bogmonsters, we might get an original story.

Ash of Gods: Redemption, based on the works of Russian author Sergey Malitsky, has its own version in the Reapers, former angel-like beings who have turned on the mortals of the world of Terminus in the absence of an overseeing God. Quite surprisingly to the people of this world, the Reapers have returned – which is a bit weird as everyone talks as though such a return was inevitable and they’ve all been waiting for it. As the Reapers lay waste to the land with fire and sword, they also spread a lethal plague, identifiable by a black mark on the back of the neck, that eventually sends common people into a homicidal rage. The story, split into three narratives, isn’t too bad at all as a concept. The issues arise due to how its told. It could be down to the translation from Russian novel to English-language video game, but there are certainly problems with delivery. Some of the lines are noticeably clunky, and some are just plain cringeworthy, not least due to the exposition clumsily shoehorned into even the most pedestrian of conversations.

– “Would you like some eggs, Hopper?”
– “Yes please. And I’ll have them just like I did on that fateful morning 1002 years ago when I faced down the Reapers on the battlefield and ultimately failed to sacrifice my life for the good of humanity.”
– “Right. Scrambled it is.”

Thats an exaggeration, but not an overly facetious one. Oftentimes the exposition is incredibly ham-fisted, which isn’t helped by the unnatural way characters talk to each other. Each of the three narratives follows a different character: Captain of the Guard, Thorn Brenin, whose daughter is infected by the Reaping sickness; troubled Immortal Hopper Rouley who seeks redemption for failing humanity; and the brooding badass assassin Lo Pheng. There are multiple branches leading from each, some of which are heavily signposted but some of which you can’t possibly plan for, and so feel a little cheap. For example, a seemingly insignificant choice made as Thorn in the opening moments directly decides which character dies later in the act and there’s no possible way to know that at the time which, while oddly reflective of the chaos of real life, makes the choice meaningless because you don’t know it has stakes at all. It’s almost as if AurumDust were trying to outdo a certain other game that Ash of Gods is worryingly similar to. Which it is, quite blatantly. I’ve avoided talking about the big curly-horned giant lurking in the corner of the room, but there’s no way to nonchalantly sidle past it anymore: Ash of Gods is very much like The Banner Saga. And by “very much like”, I mean “almost exactly the same as”. There are differences, which we’ll get to, but in terms of the aesthetics and the combat mechanics, they could be part of the same series. The art style is almost identical, using 2D rotoscoping and identically directed dialogue scenes. The combat is so similar I actually double-checked who developed Ash of Gods during the tutorial to be sure it wasn’t Stoic.

Lots of games borrow from others, but the problem with lifting the battle mechanics from The Banner Saga in such a wholesale way is that they’ve carried over the faults, too. The occasionally fiddly, turn-based clumsiness of Stoic’s game is fully present in Ash of Gods, which tries to make up for aping everything down to the animation style by inserting a superfluous battle card system that even the characters don’t seem to understand. That said, the array of skills and abilities possessed by each character offer some variety, and the fact that nothing is based on luck makes for some decent tactical challenges. It’s also fair to say that Ash of Gods’ dual stat system is better implemented, replacing Armour and Health with Strength and Energy, and having the former suffer when the latter is damaged. It adds a little more depth to combat than simply hacking at armour before hacking at health.

If you’ve never played The Banner Saga, chances are very few of Ash of Gods’ shortcomings will bother you. The laboured dialogue can be forgiven, as can the expositiom, to a certain extent, and the combat is genuinely good. But because its so similar to Stoic’s game and because Stoic’s game is so beloved, the imitation actually does it harm. Despite a similarly grim setting, The Banner Saga’s writing is emotive and often strangely beautiful.

For its low price (£25, even on Switch) Ash of Gods is a decent game with plenty of story and incentive to run through it a few times and make different choices. Howewer, unless you’re really enamoured by the story set-up, I’d still recommend The Banner Saga to genre newcomers as it remains the better choice. But if you’ve already played Stoic’s trilogy and are looking for a similar experience, AurumDust have produced the next best thing.

Taking clear inspiration from The Banner Saga, Ash of Gods just about does enough to stands on its own merits, and delivers an engaging tactical adventure held back by a few minor faults