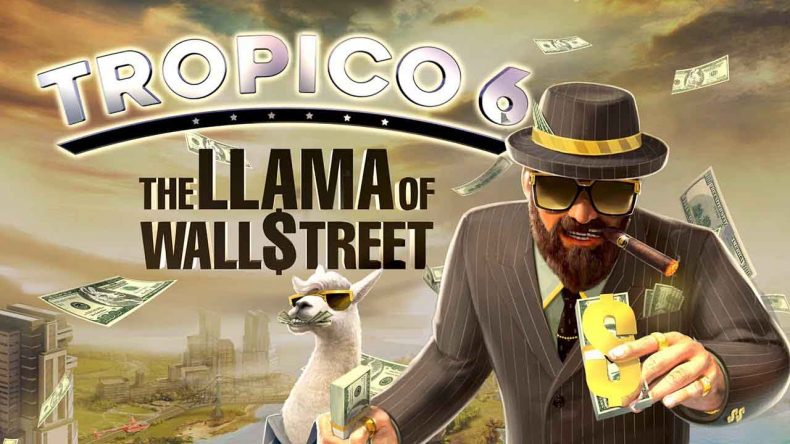 Bankers and those that work in the financial industry have a bit of a bad reputation. They wheel and deal in the markets with money they don’t really have whilst the rest of us toil hard for a living. It’s hard to not feel a little aggrieved towards them. But at the same time, it feels like a job perfectly suited to the devious mind of El Presidente as he looks to eke as much money as he can from his unsuspecting banana republic in the Tropico 6: Llama of Wall Street DLC.

As the daft name suggests, Llama of Wall Street’s focus is Tropico 6’s financial market manipulation. It adds another layer of strategic underhand means to fill your pockets with ill-gotten gains. It all starts in the brand-new Trade Institute building which is your control centre to wreak havoc. Here you can control the prices of goods to a certain extent and if done well, and aligned to your planned exports, there’s plenty of money to be made. The new mechanics are best explored in the new Llama of Wall Street map where this all comes to life. Now market prices significantly fluctuate due to external factors, meaning having some semblance of control over them becomes even more important. The Stock Broker now takes centre stage to guide you through your options, rather than being consigned to the sidelines up until now. His smarmy persona seems perfectly at home with the negative connotations of bankers that we love to hate.

The other additions are two new production buildings: the Smart Furniture Studio and the Toy Workshop. The latter of these feels like a perfectly-crafted addition as with it you can make miniature El Presidente dolls. And that perfect blend of commodity and ego boost feels right at home in a game as lavish and essentially selfish as Tropico 6. However, in the main, these buildings work the same as most other production buildings, and for most of the game, you won’t really notice a difference for having them in your empire vs other production buildings. And, sadly, that’s really it for additional content. There’s no getting away from the fact that for the first DLC it certainly does feel a bit light on new stuff. When you break it down it’s just one new map, three new buildings and a mechanic that solves a newly-introduced problem. Yes, there are also some new edicts and cosmetic additions too, but these have less of an impact. Altogether it’s not incredibly revolutionary and it’s fair to say that it doesn’t dramatically change the main flow of the game. It’s just a few additional considerations rather than a new take on an old favourite.

What is pleasing is that it does feel well-integrated to proceedings. It is possible to indulge in the usual Tropico 6 fun whilst embracing this new content. Ofttimes you get DLC that is separate but Tropico 6: Llama of Wall Street definitely can’t be accused of that. These new considerations also don’t create too much distraction to tip the scales against you. It all still feels manageable despite the new additions and doesn’t overwhelm you at any point. It also fits in with the Tropico 6 style. You can just imagine El Presidente gleefully learning how to manipulate the markets to suit his bank balance and taking immense pleasure in making it a reality. And to be fair, the new content is fun to play, especially when you learn its intricacies. Having the flexibility to deal with steep market fluctuations makes you feel more in control of your own success. If you manage to pull off a decent export line and then manipulate the markets to earn more from them, your resulting windfall gives you a warm, pleasing feeling inside to go alongside your rising bank balance. And doing so thanks to the new El Presidente doll is the icing on the cake.

But ultimately, it’s hard not to feel conflicted about the first major piece of DLC for Tropico 6. The content in the Llama of Wall Street feels too light to be considered a full-fledged piece of DLC. The new ideas also don’t have the same sense of scale or thought as the new mechanics brought to the table in the original Tropico 6, such as the Raid mechanic or expanding your empire across archipelagos. But there’s no denying it definitely still feels like a Tropico title, with its underhand tactics and the prioritisation of money above all else. I also can’t ignore the fact I had a great time reprising the role of El Presidente. I unashamedly admit to being up to the early hours of the morning playing away at it as I did back at launch. So as an excuse to dive back into the best Tropico to date, the Llama of Wall Street expansion certainly fits the bill. Just don’t expect too many surprises when you do.

Light on new content
The gameplay is incredibly similar

The Llama of Wall Street DLC packs a small punch but is still fun to play. It still feels just like Tropico 6, which will disappoint some, but be great news to others.