Batman: The Enemy Within – A Telltale Series – Episode Two: The Pact Review 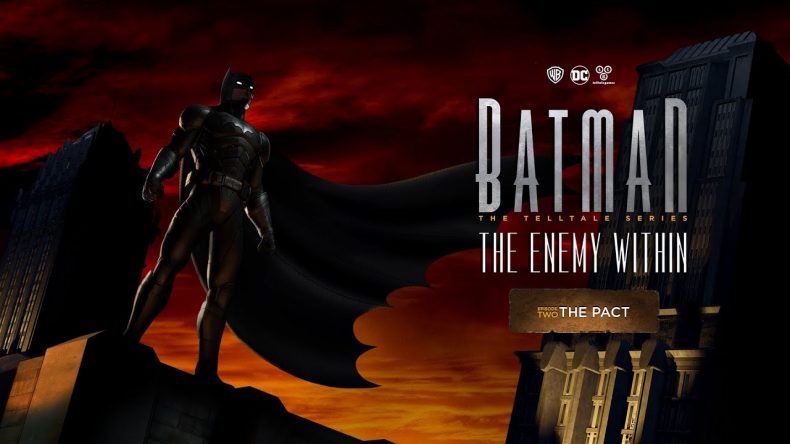 The last time we saw Bruce Wayne, he’d lost his close friend Lucius Fox, and witnessed one of his biggest enemies die. Yeah, actually die as in dead – never to return. I liked Riddler’s portrayal in Telltale’s Batman: The Evil Within, but to see him die so suddenly was quite a shock. Regardless, it was refreshing to see someone mess with the fabric of The Dark Knight’s universe in such a way whilst still having a reason for doing the things they’re doing. The Pact continues to ramp up the action, as does it keep up the constant evolution of the characters of Gotham, and by the end, I was keen to see what happens next.

In Episode Two, Bruce goes deep behind enemy lines, deeper into the madness, and closer to uncovering the new threat to Gotham, but at a cost. We’ve seen Bruce Wayne go through a lot since the beginning, but now he’s choosing to get involved in crime, with these criminals that are part of an organisation known as the Pact. He’s pushed to the limit to prove himself at the cost of friendships, and in these moments The Pact is at its most tense. You’ll know from the trailers that Harley Quinn features, voiced excellently by Laura Post. It’s a different kind of Harley, but a take that makes her feel different whilst still retaining what makes her so unique. For those that know anything about Batman, or watched the underrated Suicide Squad movie will know she is in love with Joker, and that their relationship is equally strong and disturbing. She’s also made to look like more of the submissive in the film as well as the comics (and the animated series where she came from). Her back story has also been changed drastically, moving away from falling for Mr J whilst taking care of him at Arkham.

Last season Telltale introduced John Doe, who is essentially the foundations of the Joker. Even now, he’s barely a fraction of what makes the character so sadistic and evil in the comics. He’s naive, gullible, and nowhere near as violent; he’s also nowhere near as persuasive and controlling as the Joker we all know and love, so how is Harley and Joker’s relationship going to work here, and what happens to their origin story if it’s nothing like the one we already know so well? You’re going to have to play to find out, naturally, as I don’t want to spoil it, but it’s really well done. It’s new, and interesting, and it works. It’s great to see Harley be the dominant one, a shoe on the other foot kind of scenario, if you will. Telltale Games has always made the focus of their games on the characters, and in this series, the man behind the mask. It has had moments of action and excitement, but its focus has been the story. Whilst this is no different in The Pact, there is a fight early on that blows everything that has come before it out the water. It is intense, full of choices on how to win, but most of all it feels like there is a lot at stake. You’re fighting a series’ stalwart, and one that has a history of doing a lot of damage to Batman. The way it unfolds, and the sound design of each punch and action is excellent. Up until now, I’ve felt that these fights aren’t looked upon as the most important in Telltale’s approach, but it’s clear that was just me being a cynical so and so.

The Pact is full of action, even if it does have a few scenes that play out slowly for my liking, and at the same time there’s some great interactions with some of Gotham’s most famous characters. Telltale Games are making their take on The Dark Knight one of the best I’ve ever seen, and I’m left very excited about the next episode, especially with the final moments being so great. Now Jim Gordon has been cast aside by Amanda Waller, it’s weird seeing Batman choose between loyalty and what’s best for Gotham. Harley Quinn is great, John Doe is slowly becoming that little bit more sadistic, and watch Bruce Wayne put his own mantra on the line to rid Gotham of its biggest threat leaves me both scared and excited to see what happens. Hey, even the facial animations are pretty good.

Some slow segments that knock the pacing off

It's difficult to get excited about Telltale Games at the moment, but this has me hooked and I can't wait for the next episode.