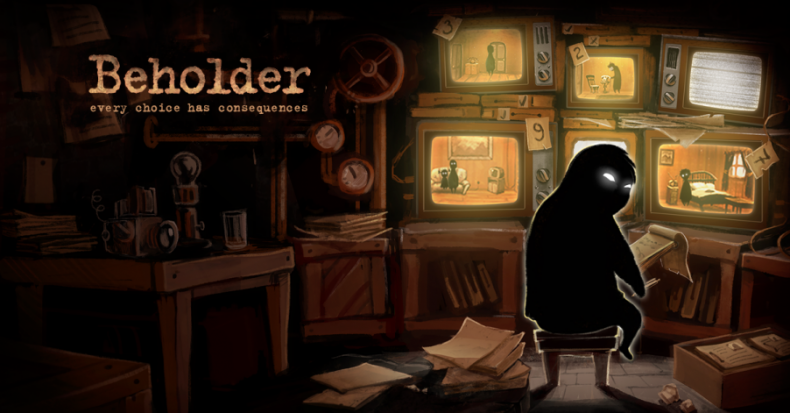 Even having looked into Beholder ahead of time, I had very little idea of what to expect from Warm Lamp Studios’ new management game. The art style is unique, straddling the line between cute and creepy in such a way that when the story (such as there is) goes dark, it’s quite unsettling.

You take on the role of Carl Stein, newly-appointed landlord of a government-owned apartment building run by the totalitarian Ministry of Allocation. For your sins, you’ve been housed in the basement apartment of the tenement block with your wife, son and daughter, and are immediately informed that, as a Beholder, it’s now your responsibility to monitor your tenants and report their every move back to the Ministry. You’ll also need to ensure that they are fed and cared for, and that you maintain a solid income.

The art style and general air of dark humour are initially deceiving, as I went in assuming I would have a few mulligans before I saw a Game Over screen. I was wrong. My first task was to spy on a neighbour from a few floors up and report suspicious behaviour. To do this, you have to wait until the subject is out of their apartment, then use Carl’s master key to break in. Cameras can be installed in fire alarms and light fixtures to give you eyes in the room at all times, and you can rifle through their bookcases, beds, desks and wardrobes to find anything considered illegal or suspect. To give you an idea, I received a news update early on informing me that it had become illegal to eat, own, or touch apples.

At this point you can also rob the tenants and sell their goods to a dodgy fence who shows up outside to trade sundries for surveillance equipment. It’s all very weird, very 1984, and oddly compelling at the same time. I swore heartily when the fella upstairs caught me in his apartment, and got most upset when I was subsequently arrested for robbing him (which I honestly thought was a job requirement). It was even more heart-breaking to find that as a result, Carl was taken away and never seen again, and his family were promptly executed.

In fact, Beholder is pretty relentlessly grim throughout. Even if you’re doing well, you’re often sending your tenants off to die and will have to deal with your family’s distaste and disgust for your actions. You can interact with the other characters, asking about their day or telling them about yours. On the one hand it’s a good way to glean the information your superiors need; on the other, few of them hold back when telling you what they think of you. Playthroughs don’t last long, but each one is different, as your tasks and tenants are procedurally generated and you have multiple ways to approach a given situation. What you can’t do, sadly, is break everybody out, steal the bus that takes them to God-knows-where every morning, and ride off into the sunset. There are more positive outcomes to shoot for, but usually, someone is going to die along the way for something silly.

The artwork takes root in a weird middle ground found almost exactly equidistant to nightmarish and twee. The blacked out, featureless characters tell stories with their glowing white eyes, while the run-down tenement is about as foreboding a place as you could imagine. Changing Rooms obviously doesn’t exist in this universe. They probably carted Llewellyn-Bowen off ages ago.

While the concept is intriguing and the world generally entertaining in a morbid way, the execution is a little bumpy. For example, the slow pace can be accelerated, which reduces mission time. It’s an obvious trade-off, but Carl’s default movement is pretty plodding. The controls are also a little iffy, because nothing ever feels truly responsive. But possibly, for me at least, the most damning indictment is that Beholder isn’t really a lot of fun. It’s a decent challenge and certainly unique among other management games, but it’s not something I’d want to play over and over.

Grim
A bit plodding
Not much fun

A good management sim with an interesting style, but it may be a bit grim for some