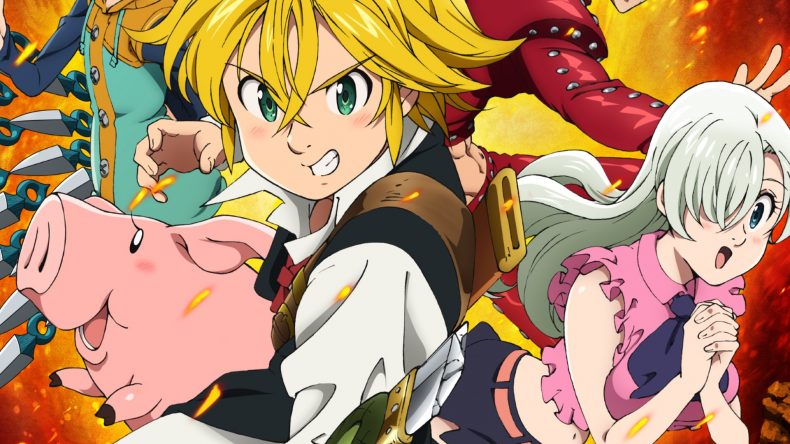 Action shounen are prime fodder for game adaptions, featuring highly charged action sequences, snappy catchphrases, large casts, signature moves, and beautiful locations. They also tend to go on for long periods, meaning they’re ripe for multiple titles (One Piece is nearing its 900th chapter, Naruto went for 700, Bleach for just shy of that). The newest series to get an adaption is Suzuki Nakaba’s Nanatsu no Taizai, or Seven Deadly Sins, which has recently passed it’s 250th chapter.

As is the norm for this kind of title you’ll work your way through the story taking part in the battles that the series has played host to, although in a stilted fashion. The game follows the story practically to the letter, with Princess Elizabeth of Liones trying to track down infamous knights The Seven Deadly Sins, starting with a boy who runs a tavern called the Boar’s Hat, who just happens to be the group’s former leader, Meliodas. Between battles there’s story exposition that’s akin to watching a bunch of mannequins stand around while a recording plays, it’s kind of depressing how little life there is outside of the battles you fight and the manga feels like it has more movement than this. Anyway, the battles are where it’s at. You’ll either be taking part in one on one, two on one, two on two, and one or two on many fights, and be tasked with meeting the win condition (incapacitate your foe) within an arbitrary time limit. Battling in a way that causes damage to the local scenery will cause people to gossip, and rumours to spread. The more the populace of Britannia talk the more quests will open up for you. Yes, this is a typical manga adaption, it’s literally filled to the brim with filler content, none of which is as interesting or exciting as the mainline story.

There are battles, more battles, battles involving Meliodas’ pig friend Hawk, some more battles, and some quite literal fetch quests involving you playing as Elizabeth who can’t fight and instead needs to call on Hawk to kick ass while you try and pick up some glowing thing on the ground. Regardless of which type of mode you wind up doing it all feels so similar, so samey and so rote. It’s why they ask you to keep changing who you’re playing as, because it’s the only way things feel ever so slightly different.

Meliodas is the main character of the series and while he’s fast, he’s nowhere near as fun to control or easy to combo with than Ban, or even King; who flies. Then there’s Diane the giant who lumbers around slowly, but can decimate entire groups of enemies with a single attack. In an even worse kick in the teeth to Meliodas even Hawk feels much better to fight with, but at least Meliodas’ Revenge Counter does awesome damage, should you manage to actually hit with it. Each character has a bar for magic abilities, which can be used to attack from a distance, zip behind your enemy or perform a special attack by pressing R1 and one of the attack buttons, after dealing out sufficient punishment another bar to the side of the character portrait will have filled up allowing you to click R2 and unleash your character’s ultimate move. Combining those attacks into devastating assaults will send your infamy up and cause people to gossip causing more side quests to appear across the giant map of Britannia. The world is a set of interconnecting areas bisected by gate forts to impede progress and funnel you through the story. When new missions appear you’re never told where, and as a result are forced to backtrack to old areas to see if something new has appeared, not only that, but whether or not you’ve finished them they still may disappear and reappear later, you’re always left guessing whether or not you’ve completed a task before, because there’s no indicator until you’re right on top of it.

There’s more than just those ideas that are great but don’t quite feel fully fleshed out. Locations are repeated even when you’re in different areas, enemy mobs are re-used constantly, and just beam in when you’ve defeated the previous set. Character models are poorly animated when doing anything other than fighting, and they’re also poorly aliased. There are also times when the frame rate plummets to ridiculous levels, even on a PS4 Pro with boost mode enabled, considering the game isn’t incredibly taxing in the looks department this is really quite unforgivable.

In battle there’s an automatic lock on system which almost works. More often than not attacks will see you hitting the enemy in the targeting reticule, while others will see you zipping right past them, or even towards an enemy you can’t even see on the screen. At times I found myself flailing at thin air for many attacks while I tried to readjust the camera so I could hit the person I wanted to. Sometimes enemies can clip into scenery as well, which bestows a form of invulnerability on them until they can get out, it’s a good trick if only it could work in real life. Outside of the adventure there’s a duel mode, where you can take part in a solo battle against the computer, a co-op battle where you team up with AI to take on two AI enemies, then there’s a one on one online battle, and also local multiplayer, which, you guessed it, is poorly fleshed out like the rest of the game. Local multiplayer features no single plane and no split screen, the camera instead stays rooted behind player one, meaning player two is always at a disadvantage, with scenery getting in the way as you try to traverse even basic ledges. A horizontal divide would have been a better solution.

Knights of Britannia is a game that could have been so much more. Chasing after a demographic of fans keen on a series that is pretty fledgling in the grand scheme of things has resulted in a game that has some good ideas but none of which are really executed well. I mean, this comes hot on the heels of Dragon Ball FighterZ, a game that really gives franchise fans what they’ve always wanted to see, in terms of spectacle, looks, content and barrier to entry, it even comes from the same publishing house as Seven Deadly Sins. Maybe Dragon Ball FighterZ has spoilt us, but it really is the defining anime game around right now. Seven Deadly Sins is colourful, but ultimately lacks the charm of both the manga and the anime, and that is truly the worst sin.

Some good ideas
Good representations of the cast

Surely a game that’s looking over at it’s anime stablemate green with envy, Knights of Britannia commits the sin of sloth, and ultimately lacks pride.

You may also like
Bandai NamcoThe Seven Deadly Sins: Knights of BritanniaPlayStation 4