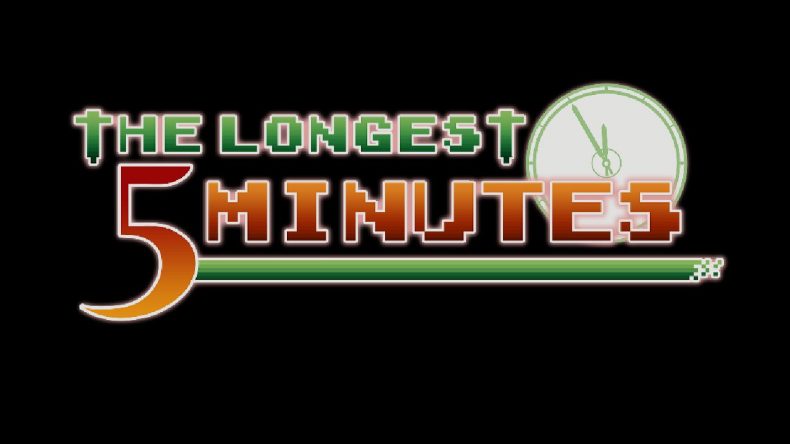 I’m a big fan of NIS America’s smaller releases like The Firefly Diary and the Yomawari series. When a friend of mine was in Japan a few years ago, there was a display for a Vita game that had a really lovely pixel art cover. That game was “The World’s Longest Five Minutes”. Having read a bit about it, I was intrigued by the concept where you start at the final boss but can’t remember how you got there or who anyone is. The wait for an English release has been super long but NIS America has localized it for not just PS Vita and PC as was the norm for them around the time, but also the Nintendo Switch. This is the second Switch release from NIS America and while I still love the concept, there are some design decisions that annoyed me and one visual aspect that doesn’t work on the Switch.

You play as Flash Back (Apt name) in this tale of flashbacks and more that harkens back to the NES era with a lot of things that reminded me of both Dragon Quest and Earthbound but not in the best ways at all times. What opens up with the final boss fight results in a retelling of various scenes from before as you recall what happened to lead up to this moment. The Demon King and your party are facing off, but you can’t remember who is with you and why you’re there. The story is split up into various memory fragments that are at different times in the past. These have you playing through dungeons, levelling up, doing basic side quests, and more. What’s interesting is how grinding and equipment and things don’t really matter. Each memory is separate and anything you do in one doesn’t carry over to the other when it comes to things like money and equipment. I love how this game breaks down old school turn based JRPGs to the basics but also has its own humour going that holds things together. Gameplay involves exploring a basic overworld map, moving from town to town depending on the situation, completing quests, and a lot of combat. Combat is turn based and it would fit right at home on the NES. In fact a lot of the design here feels like it was taken straight from that era. This results in some annoyances as well. In some cases movement between locations feels sluggish with too many random encounters and there are also some quirks about how interactions take place with NPCs here. I know a lot has been done to feel like an old school game but I was hoping that the influences would still have some conveniences of modern RPGs or modern games in general. The dungeons are quite nice and one of them early on even has you fighting against barrels of wine. This reminded me of that Asterix and Obelix scene where Obelix gets drunk for some reason. There are some decisions you get to make and there are multiple endings, but I was hoping for a more branching path outcome given the structure and premise of the game.

Visually there’s a combination of NES era sprite work and some more modern looking pixel art. I’m not a fan of some of the mismatch where your playable characters feel like NES era sprites while the actual Demon King looks a lot more detailed. Thankfully the actual memories you experience and dungeons all look very nice and have a certain charm that extends to the localization. There’s some decent humour here but nothing mindblowing. The big problem I have with the visuals is the interface. Playing this on the Switch in handheld mode already has some of the UI elements feeling a bit larger than they should be. This was a Vita game at first but having the same UI proportions when playing on a big TV through docked mode on the Switch results in everything being too big for its own good. Conceptually there’s a lot to love here, but still a lot of it is forgettable. If this had a bit more effort put into it story wise and if it didn’t rely solely on one gimmick, The Longest Five Minutes would be an easy recommendation for any RPG fans. In its current state the asking price is a bit too much for an adventure that will likely not remain with you for long. If you do decide to get this, play it on a handheld. The visuals and design suit a portable play style a lot more than a big screen experience.

The Longest Five Minutes is an interesting RPG that has a non linear story with some interesting classic JRPG mechanics that also suffers due to some tedious design decision.