previous
Life is Strange: Episode 2 - Out of Time Review
random
next
Game of Thrones: Episode Three – The Sword in the Darkness Review
Game of the Month
7 likes 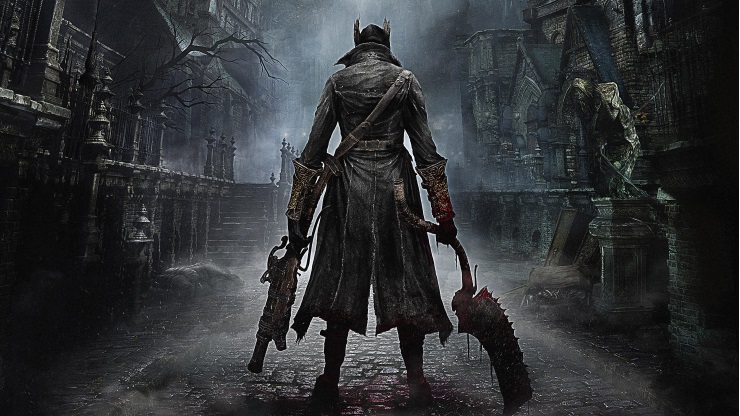 Yarnham is a cursed city, a sprawling 19th century metropolis writhing in the grip of a terrifying infection. Those few citizens who still cling to their humanity barricade their homes against the onslaught of an endless night that cloaks the infected in relentless shadow. Beasts that once were men stalk the darkened streets, and only the Hunters stand against them, fighting for the people of Yarnham as their own humanity dwindles to embers.

Such is the setting of Bloodborne, an action horror Souls-game that pits you as a Hunter trapped within the doomed city. Only by finding and stemming the source of the infection can you hope to save Yarnham, and yourself, from the jaws of hell. In between sojourns into the blood-slicked streets and gloomy under-city, you’ll awaken in a never-ending dream that may or may not be real, where you can spend the echoes of your enemy’s blood to bolster your strength, or repair and fortify your brutal weaponry.

The story isn’t laid out immediately, and every tiny scrap of exposition you find only creates more questions. This is typical of From Software now, and it’s easy to get swept along by the action and create your own narrative in your head. You won’t find out immediately why your character came to Yarnham for a blood transfusion, or why said procedure plunged them into such an horrific nightmare. Moreso than even Demon’s Souls, Bloodborne is very horror-focused, going out of its way to unsettle and unnerve you, and much of that is owed to your own imagination. As gritty and gripping as the setting undoubtedly is, this is essentially Dark Souls 3, or maybe Demons Souls 2. We should really get that out of the way and make peace with it: Bloodborne borrows its mechanics wholesale from its spiritual siblings and, although it twists several of them to its own purposes, many of the gameplay tropes here will be familiar to series fans.

The biggest indicator that you’re playing a From Software game is, of course, the difficulty. Bloodborne is fiendish, even evil at times, and unapologetically punishing. There’s a confidence to it all now – even more so than you may have sensed while playing Dark Souls 2 – that they know their audience. They know what we can take, they know what we expect, and they know what they can do. At times, Bloodborne almost feels like a controlled experiment of sorts, as expectations are played with and they push against the already established boundaries.

For example, while the core combat feels instantly familiar to series vets (with both of your character’s hands controlled by the shoulder buttons) there is no dedicated block action. Although makeshift shields exist, Hunters don’t tend to use them. Instead, the onus is on attack and evasion, leading to slicker, more immediate and brutal combat. Every blow lands with a wet, sickening crunch as you leap, roll, sidestep and swing, creating a heavy-footed ballet of bloody violence that leaves you covered head to toe in gleaming viscera. It’s all facilitated by the weapon set-up. In place of a shield, your Hunter can equip various ranged weapons with which to damage and stun attacking enemies. Once staggered, enemies (even bosses) can be either dispatched or decimated with a follow-up attack – it’s a similar set-up to the back stab, in that it requires patience and timing to pull it off. Tapping L1 will extend your melee weapon, giving you greater reach at the expense of speed and, in some occasions, your off-hand, while light and heavy attacks are mapped to R1 and R2, respectively. It takes time to master the combat, but success is often a case of pre-empting your opponent and acting accordingly. If you do take a hit, quick reactions will allow you to recoup some of the blood you lost from the foe that took it. This “regain” system is not usually enough to fully heal you, but it may save your life. Conversely, you can sacrifice a small measure of health to give yourself five blood bullets if you find yourself clicking an empty chamber – during a boss encounter, they can mean the difference between life and death.

From’s confidence is never more clear than in the insight system. This new stat replaces humanity, and every point you earn increases your Hunter’s ability to see the supernatural. The first point you earn reanimates a doll in the Hunter’s Dream, allowing you to level up, but the higher your insight, the more you’ll see; secrets will be revealed, enemies will change – the world will evolve in small ways. Insight is also spent to summon allies or invade other players. You’ll earn it by achieving certain story elements or absorbing a “Mad Man’s Knowledge” item. Elsewhere, the trend of tweaked similarities continues. Killing foes earns you Blood Echoes as opposed to souls, which are used to level up and buy gear. Death will see you leave all your Echoes behind, and you must return to the scene to recover them. The main difference here is that, now and then, an enemy will pick them up and wander off with them. If you see a beast with glowing white eyes, it’s got your Echoes. There’s no going Hollow here, but death will return you to your last Lantern save-point and re-spawn all the enemies apart from bosses. Estus Flasks are replaced by Blood Vials, of which you can carry twenty. Bloodborne may be a harsh mistress, but she’s mostly fair. Mostly. One thing that makes Bloodborne seem more balanced is the lack of Hollowing. Without it, all you stand to lose by dying is your stock of Echoes, but since you can’t farm enemies out as in Dark Souls 2, and because you can buy an item to return you, Echoes intact, to your last Lantern, it’s slightly easier to make progress.

That being said, repeated deaths during boss fights can become incredibly annoying. Because you must manually replace your quicksilver bullets and Blood Vials, you’re occasionally forced to go farming, grinding on easy grunts for some quick Echoes and loot drops. The relatively fast pace of looping boss fights until you win is lost here, and it can feel like something of a chore. Lesser enemies are tightly packed but yield low blood rewards, and it can take a while to replenish your gear. A storage chest goes someway towards alleviating this, but you won’t often find yourself with spares to store.

Those who tire of the grind or are in need of Echoes might try their hand at one of the new procedurally generated Chalice dungeons. Anathema to the dirge of speed-run videos we’re all predicting, these randomise every time, meaning you must rely on skill, not muscle memory, to survive. Be warned though, some are genuinely rock solid, and acquiring the Chalices that open them isn’t particularly simple, either. The atmosphere they exude is slightly different to the main game. Because they present a compound, instanced challenge, they take you out of the horror of Yarnham and into something that feels naturally more fun and accessible. The online element makes a return, this time allowing you to summon friends by scribing their names in your notebook. As with Bloodborne’s stable-mates, playing with another person is a massive bonus to most boss fights, but invasions are usually an utter pain. Here, other players can and will invade your game from time to time. It’s best to simply accept that it will happen and deal with it when it does. Thankfully, you can’t tell who you’re invading, and so griefing remains at a minimum, and the fact that you need an Insight of thirty to invade means the numbers will be fewer than in previous games. The scariest part is that you can invade – and be invaded – by groups of two or three.

Graphically, Bloodborne is stunning to the naked eye, although closer inspection will reveal an occasionally stuttering framerate and odd corpse physics. It’s nothing terribly troubling, but it is noticeable despite the rich world on show, as are the lengthy load times. Atmosphere drips from every grimy gargoyle, ripples in every filthy puddle, flickers in the half-light of every guttering torch. Shadows crawl across sweating walls and make horrific beasts from harmless statues. Yarnham is an evil, malicious place, even in its majesty, and its gothic grandeur has rarely been equaled. Where Drangleic had Madula to reassure you that the sun still rises, Yarnham has only its endless night to remind you that you are just as helpless as the rest.

That wonderful atmosphere extends through the sound direction and scripting. No one in the city trusts you, just as you should be wary of trusting them. But it goes beyond that. There’s rarely a moment that you can’t hear a groan, growl, manic laugh or distant scream – maybe just the howl of the wind through the litter-strewn alleys or someone quietly sobbing. Played with a decent set of headphones, it’s positively chilling at times. Interestingly, it has also been optimised for remote play on the PS Vita. While you obviously lose some of the ambiance and the target lock is relegated to the rear touchpad, it works very well. While it’s certainly no great revolution, Bloodborne is further evidence that From Software are true masters of game design. The city is vast, but as you progress you’ll open up shortcuts, lifts, ladders, hidden gates and, of course, lanterns, and you’ll never need a map to find your way around. Quite how they manage to make something so complex feel so straightforward is way beyond me. The fact that you can save and exit anywhere and resume where you left off is a welcome change, so if you must stop halfway through a tough area to take a break you won’t have to begin it again.

Bloodborne is an immensely intricate and tightly-designed game that arguably surpasses what From have produced before, thanks to a handful of new ideas and tweaked mechanics. A system that promotes repetition to refill your consumables, and a difficulty that encourages level grinding in the opening few areas and at various intervals throughout feel like minor missteps, but they’re tiny ones at that. Despite a few minor performance issues, Bloodborne is an epic, compelling, heart-pounding triumph.

Thrilling and masterfully crafted, Bloodborne is a gorgeous, grim and gruelling adventure,and unarguably the first essential exclusive of this generation.