Game of Thrones: Episode Three – The Sword in the Darkness Review 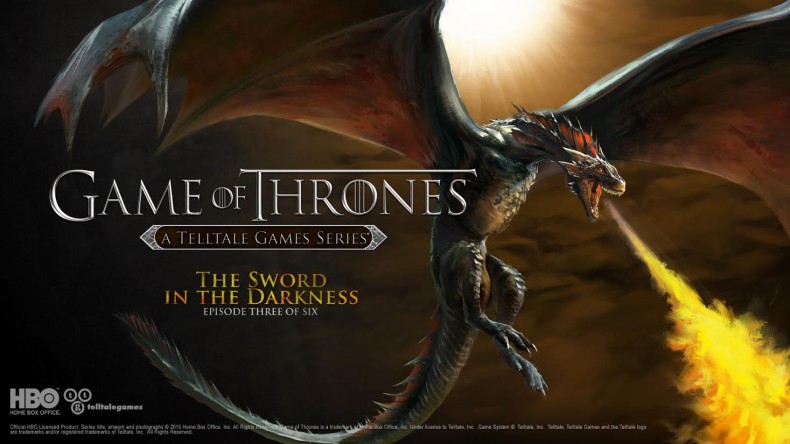 With Telltale Games’ Game of Thrones being so entrenched with the HBO television series, only read on if you have watched the TV show up to and including season four episode two, and have also played episodes one and two of this series. Spoilers for The Sword in the Darkness have been kept to an absolute minimum in this review. You’ve been warned.

Telltale’s decision to make their Game of Thrones adaptation a six-parter rather than the regular five episodes was, at first, an interesting one. It seemed like they didn’t want to become restricted to the format that they had popularised with the recent resurgence in episodic gaming. What The Sword in the Darkness shows us is that more isn’t always best when it comes to the team behind Tyrion’s digitised mug. This is the epitome of a transition episode. Now, let’s transition to the next paragraph, shall we?

At the end of episode two, the scattered Forresters are in turmoil: Mira was with Ser Damien in the gardens of King’s Landing in the dead of night and, depending on your choice, potentially killed him. Malcolm has reached Asher, but they soon find themselves on the run from the Lost Legion. House Forrester, along with an injured Rodrik, are mourning the death of Ethan and Gregor. Meanwhile, Gared Tuttle, who left for The Wall in episode one, is attempting to become a ranger in the Night’s Watch. When relying on narrative, pacing is key, and aside from a few minor hiccups, Game of Thrones was shaping up nicely. Episode three has seen this series take one step forwards and two back. Over the course of the playthrough, things occur, sure, but not much happens.

The very beginning of The Sword in the Darkness sees Asher come face to face with a dragon – the first time we’ve seen one of these flying beasts. Yet it feels like a non-event until the very last scene of the episode. The Forrester outcast’s sections are dull and moving at an alarmingly slow pace. Though his task is arguably the most important of all the Forresters (obtain an army of men for a showdown with House Whitehill) his thread is the one that has been merely spinning its wheels. After episode two, I was intrigued to see more of Asher, as his inclusion was limited, but after only a short stint as the bad boy Forrester in this chapter again, it’s been proven that he’s the most redundant primary with the most paramount job of all. The return of Rodrik in The Lost Lords was a genuine surprise, and his effort to rebuild a fallen Ironrath was revealed to be the crux of the whole series. Episode three shows more of Rodrik’s struggles with House Whitehill and the mental battle he has, to either keep the peace by bowing to the rival house, or lash out and let his anger fly out in the form of his fists. There is minor progression here and a shocking, yet predictable, revelation toward the tail-end of the Lord’s story. Mira’s conclusion in episode two had my imagination running wild as there were many possibilities for the Lady Margaery’s house-maiden, but it’s all much ado about nothing until, again, the episode’s close. There is some satisfaction to be had as Cersei makes a brief appearance, and in a fleeting moment Lena Headey shows her class once again – and Natalie Dormer as Lady Margaery is an absolute joy. Her ability to portray a calculated woman with a clear goal is as clear here as it is in the TV show.

The one area where there is more than a miniscule bit of development is with unlikely hero, Gared. In The Lost Lords, The depiction of The Wall was as good as you could imagine. A harsh environment, with even harsher individuals within The Night’s Watch. Gared’s scenes are by far the most interesting as it appears he holds the key to potentially righting the wrongs of the Whitehills. Also, while there is sufficient build up to Gared’s eventual duty to the Forresters, he also comes face-to-face with an issue that needs to be dealt with. The incredibly lacklustre Jon Snow from episode two features more this time around and is most certainly improved, which is needed to reinforce Gared as a character due to the amount of interactions they have. However, he does retain the award of least interested celeb, going by his performance. If you’re reading this, I’d hazard a guess that you’ve played the other two episodes in the series and know how jarring the visuals are. TellTale are remaining true to their artistic direction, regardless of how it might look. Character models are adequate with laughably large mannerisms, while the backdrops retain their paint-like aesthetic. It’s not going to change and it’ll be terrible up until the conclusion of episode six, no doubt. Technically speaking, I didn’t experience any hiccups, except for one moment at the very beginning where a piece of dialogue began to repeat itself. Other than that, I had no issues.

Iron From Ice and The Lost Lords were compelling chapters in the narrative of this Game of Thrones thread. They built suspense for future events, whilst also providing some resolution to little subplots running in tandem with the overall story of House Forrester’s issues with House Whitehill. The celebrity cameos stood out as top tier moments and the foundation was being laid down for what could be a true great in Telltale’s catalogue. However, they’ve hit a creative roadblock. Certain characters are evolving much quicker than others, and for this to have as much punch as the TV show it’s based upon, it needs a stellar follow up to this average showing.

Gared's evolution with the Night's Watch .
Points of Rodrik's struggle are intriguing.

Overall story has slowed down far too much.
Art style remains jarring.

At the middle point, Game of Thrones is losing its momentum and, except for Gared and elements of Rodrik's story, hasn't shown enough progression to get people excited for what's to come.