Life is Strange: Episode 2 – Out of Time Review 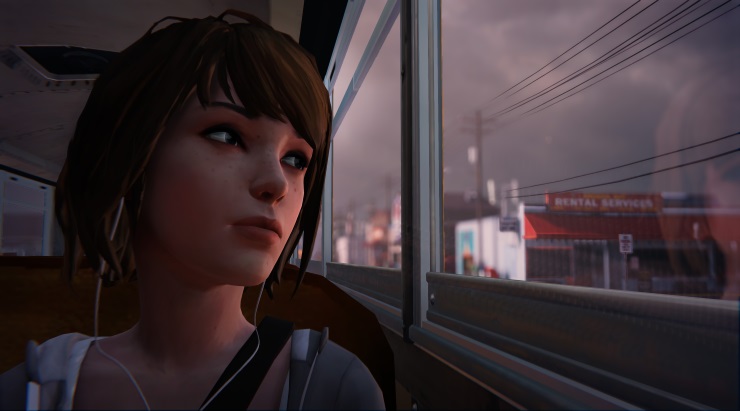 Episode two of any episodic game is often one of the most important. It’s where the story really starts to advance, the characters become almost fully fleshed out, and a lot of players decide if they are going to continue playing or give up on the series. Fortunately for DONTNOD, Out of Time is an incredible experience that is almost guaranteed to make everyone want episode three to be available instantly.

Things start out with Max waking up the day after episode one, in what is an incredibly well produced and cinematic scene. After waking up, Max heads to the showers where she learns a bit more about classmate Kate Marsh (who ends up playing a major role in episode two), and after a few more interactions heads off to meet blue-haired best friend Chloe. The opening twenty or so minutes not only do an excellent job of reintroducing you to the world and characters, but also advance the plot at a fairly rapid pace. New information is thrown at you frequently and seemingly important (we can never be sure just how important they are) choices pop up very early on.

Once you leave the Blackwell campus and meet Chloe, things slow down considerably, although this is most likely intentional, as a fast paced experience would feel unnatural. After meeting Chloe’s mum (whom kindly gives you breakfast), Chloe insists that you prove you have the power to rewind time. After a few memory challenges (that are fairly easy to get through with little use of the rewind) you both head to a junkyard to have some more fun.

The time you spend with Chloe does little to advance the plot directly, but adds more depth to the friendship, which continues to be well written and performed. A bit of a quicker pace and fewer menial tasks would have certainly made this portion of episode two (which makes up almost half the run time) more entertaining, but it isn’t bad by any stretch of the imagination. Once Chloe heads off and Max returns to Blackwell for class the pace really picks up again, with a new major revelation or event happening constantly. It’s the last third of episode two that really stands out as the best portion of Life is Strange so far. No interaction with anyone feels unnatural, the choices you make, especially in conversation, feel like they have real meaning and it finally becomes clear how choices from episode one are bending the narrative path.

I’m being intentionally vague here because it is difficult to mention anything past the halfway point in the episode without revealing major plot points. The impact that these events had, made me realize that despite only “knowing” the characters for a short period of time, I have become heavily emotionally invested in them – something that very few games manage to do even after spending hours with the characters. There is the odd issue here and there, such as the occasional frame rate drop (and the lip-syncing still isn’t amazing) but these can mostly be overlooked. Perhaps the most annoying moment in episode two came during an important conversation that has a major impact on the story. The conversation options popped up, I selected one that seemed reasonable, but the result wasn’t what I expected or wanted to happen. With the rewind option being (almost) always available I went back and chose another option which had more of a desired outcome, but this was the first time where I thought that the option on the conversation wheel didn’t match what was actually said.

Out of Time is a triumph. For the most part, things are well paced and never really become boring or feel like you are waiting for something to happen. The interactions feel as natural and real as they did in the opening episode and, again, the conversations between Max and Chloe are a real highlight. The odd issue here and there can easily be overlooked due to how great the last few sections are, and just how much of an impact they had. There was even one shot in the reflective montage at the end of the episode that almost brought a tear to my eye.

Read our review of episode one.

Improves on what made episode one so great, while adding a bigger, more impacting story.