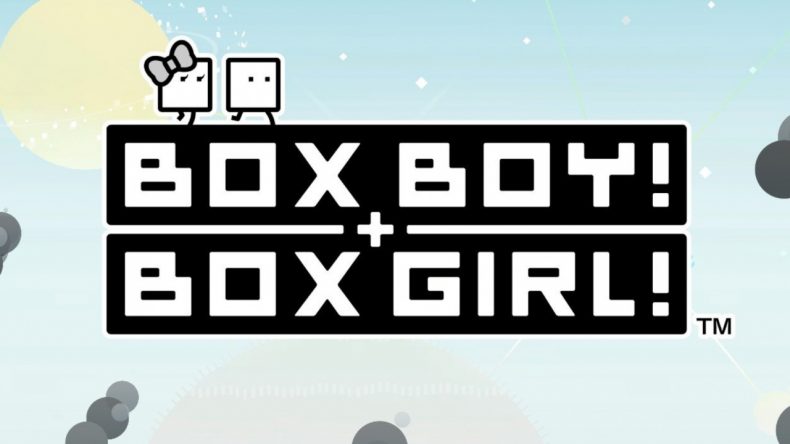 Nintendo’s DS family of systems has been around for a long time now. I never owned an original unit but I’ll always remember picking up the DS lite when that released with a copy of Phoenix Wright and Warioware. In a way it seems sad now, that the console family now meets its end as one of the best game series’ of its latter years makes its way to the Switch. At least it lasted longer than the Vita I guess.

Boxboy is back for his fourth outing on Nintendo’s Switch system and (as is generally the case with Switch games) it features co-op play for the first time. That’s not to say that you can’t play this how you always have. HAL Labs has included the game’s regular single player mode here along with making co-op play accessible enough for a single player to do it. So once again we delve into the world of block based puzzling to save the monochromatic world of the box people. There’s a smattering of colour in this instalment, with the opening level boasting a lovely bright green which paves way for the signature black aesthetic when a cataclysmic event prompts your chosen box-person into action to save the planet. That’s not to say that colour completely disappears after this event, hazards are now colour coded so you can pick them out a bit easier while new button based puzzles require you to differentiate between multiple buttons to be able to open the path.

Colour isn’t the only new addition to the world of Boxboy, though. Now, Qbby and Qucy have a whole load of new abilities like slam (bashing boxes down through the ground), hop being able to create a box pogo stick to jump across hazards), and my personal favourite slide (being able to fire a collection of boxes straight forwards). Once again knowing how to use the abilities afforded to you to get through the levels is paramount, but as before none of the new abilities hang around long enough before you’re sent to the next series of levels and a new ability to learn; however, they do make an appearance as a sort of refresher gauntlet in the game’s final world. So, yes, the general aim is the same, use the abilities to make your way to the goal picking up the crown(s) on the way. However, a slight change here is that you now cannot go over a level’s ‘box limit’, before you would lose the opportunity to obtain the crown(s) on the level if you went over the allotted amount of boxes, not any more. Each level has a set of criteria like the aforementioned crowns, and the amount of boxes used, with good results for both resulting in more medals dished out as a reward. Collect all the crowns and you get medals, finish the level under the box count and you get more.

The box count now adds an extra element of replayability for each level now because you’ll get a grade of one to three depending on how far under the count you are, and you’ll only manage to properly finish each level by collecting all the crowns and getting a ‘three’ rating. The series’ hint system returns and can go a long way to helping you keep under the count, giving you an idea of the shape to get past your current obstacle. You then just look to reduce the amount of boxes used by one, it only costs a couple of medals too, making it a cheap way to get past a real head scratcher, the only issue is that it doesn’t tell you how to get past the puzzle to get the crowns, that’s down to you to solve. A benefit from going from the DS to the Switch is the leap to a cleaner ‘HD’ look. I’ll admit that to begin with I felt it looked a little too clean, I quite liked the jagged little edges that the DS hardware rendered my little box pals in, but overall the new look grew on me to the extent that I completely forgot it was never originally in HD to begin with. What is odd, though, is that despite this being a simple looking game it suffers with some odd slowdown. Granted this normally comes when there’s more than one character on the screen, or a couple of hazards visible, but as this isn’t really a visually taxing game I don’t think the Switch should be struggling under any sort of load here.

Finally, one thing that the older games had was different costumes, some of which came with different abilities. While these are present they are now distributed via a capsule machine, meaning that it’s luck, not choice that determines if you’re able to get the costume you want. If you’ve got a load of medals and want to splurge on outfits you’ve got to wait for the gacha animation each time; it’s not terrible, but it’s annoying and unnecessary. If you want the abilities without the outfits though you can use medals to purchase ability boosters like invincibility or a higher jump from the shop. These are consumed upon use so if you like using them you’ll have to stock up.

Boxboy + Boxgirl is still the puzzle game fans will love, and there’s no need to play the previous games for new people to jump in here. There’s plenty of stuff here too. Granted, the regular single player is over a little too quickly, but then you can play the co-op scenario on your own if you’re so inclined, plus finishing the regular ‘Tale for One’ mode you open ‘A Tall Tale’ and can play as Qbby’s elongated friend Qudy. Add this to a balloon popping mini-game accessed through the shop and you’ll find plenty here for you to enjoy, and for something so cheap too.

Boxboy + Boxgirl is a banging, box-based Brain-teasing bonanza and brilliant at a budget price.

Kirby Floats Back Onto Wii At E3