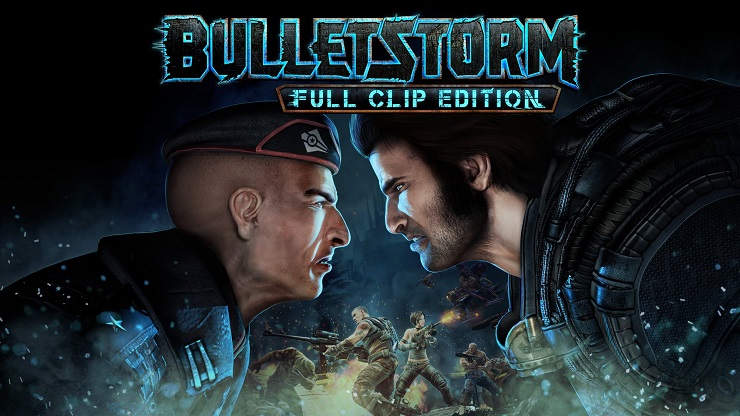 If you completely missed Bulletstorm during its initial release in 2011, I’m not surprised. It sold relatively well in the beginning and received decent reviews, however, thanks to some controversy cooked up by Fox News, and a decline in interest, the new IP fizzled out, and Bulletstorm 2 was cancelled. Thankfully, Bulletstorm is back, and has been re-released with improved visuals and lots of extra stuff, including an opportunity to play through the main campaign as a very familiar asshole.

Bulletstorm is a frantic FPS with some really good mechanics; movement is fluid, and combat is varied with rewards being dished out for finding different ways to execute your enemies. If you’re unfamiliar at all, you play as Grayson Hunt, the leader of a black ops outfit known as Dead Echo. He’s a gruff-voiced, Logan lookalike, and at first he comes across like a dick, but you grow to love his roguish charm – much like Duke Nukem in that respect. After killing a civilian reporter (who you were led to believe was a criminal), you decide to take revenge on the man who’s been giving you these despicable orders, Star General Sarrano.

The story is pretty generic, involving revenge, cyborgs and explosions galore, but it’s secondary to the set pieces and the great combat. Seriously, it’s glorious, and it still holds up now. In fact, the framerate is stable (apart from a couple of times when plenty of onscreen chaos caused some stuttering), and the texture resolution has been improved greatly. The audio is crisper, too, and hearing everything explode as well as a thousands bullets speeding past your ears at an alarming pace really gets your blood pumping. You’re given a leash which acts as an electric lasso; it can pull enemies towards you, move large objects, and connects to various Dropkits located throughout the game; they allow you to see the different kind of Skillshots you can perform or have unlocked, check game statistics, and upgrade all your items. There’re loads of guns available for purchase, and you can kick enemies all over the shop. Bulletstorm rewards you for being inventive when killing enemies, and by unlocking and initiating Skillshots, you’ll earn points to unlock new items and abilities.

This keeps combat fresh, and using the environment as a secondary weapon becomes a lot of fun. Pull an enemy from a distant into a cactus unlocks a ‘Pricked Skillshot, kill an enemy who’s on fire will earn you the ‘Afterburner’ Skillshot, or shoot an enemy in the Jacobs then kick their head off to earn the ‘Mercy’ Skillshot. There are a tonne of them, so experiment for maximum enjoyment and laughs a plenty.

This isn’t just a re-release because there’s plenty of new stuff to get stuck into, including new Echo maps (short segments of the campaign you play through to gain high scores, with results submitted to online leaderboards) that now total 30, and a brand new Overkill mode. Once you’ve completed the single player campaign, you’ll be able to take part in this mode, and it allows you to play through the game again using all Skillshots and weapons from the outset – nothing is restricted. Unfortunately, I wasn’t able to test the multiplayer as there were seldom players on the sever with it being pre-release. If you pre-order BulletStorm: Full Clip Edition, you get something really special. If you thought Grayson Hunt was a bit of a cocky, potty-mouthed assmaggot, try playing through the game as Duke fricking Nukem! Duke Nukem’s Bulletstorm Tour allows you to play through the entire game as the King, with brand new lines recorded just for this game, and all dialogue is done by Jon St. John. I played through a fair amount of this content, and it is brilliant, especially if you’re a fan of the character anyway. Before Duke, the game was already full to the brim of testosterone and bullets, now add into the mix Duke’s vulgar wit and you’re on to a winner.

The great thing about this content is Duke has somebody to talk to; a lot of Duke’s previous work had him fighting alone, but you’ve got all of Bulletstorm’s side characters to talk to. As Duke is just replacing Gray, their dialogue remains unchanged, however, Duke Nukem replies with some real zingers. When Ishi is trying to explain about evacuating a location due to fusion reactors about to explode, Duke replies with “that’s a whole lot of nerd talk for get the fuck out of here”. Later, when Duke asks Ishi how he’s coping with his cybernetic transition, and after telling Duke how much pain he’s in every second of every minute, Duke simply brushes it off (because he doesn’t really know what to say) and asks if he has any gum. It’s natural, funny, and a perfect game to have Duke Nukem is a part of. And it’s so fucking cool to see a 3D Duke Nukem again. Fingers crossed this isn’t the last time. There is one minor annoyance I had with the dialogue; because the other character’s dialogue hasn’t been altered, they still call Duke, Gray. You’d think this would’ve been addressed, but hey ho, it hasn’t.

Bulletstorm: Full Clip Edition is great for first timers who want to shoot shit up and cause as much chaos as humanly possible. Aesthetically, it’s a mix of Mad Max and Gears of War, and the fidelity of visuals has been improved massively. The gameplay does feel a little dated, but it’s still relatively easy to get used to. Duke Nukem is a genius inclusion, and it works very well. More Echo maps will push you to the limit, and after finishing the campaign, you’ll be able to go nuts in the new Overkill mode.

If you never had the privilege of playing this when it came out originally, now’s the perfect time to give it a go. It’s action-packed and smarter than it may appear, plus Duke Nukem is in it!