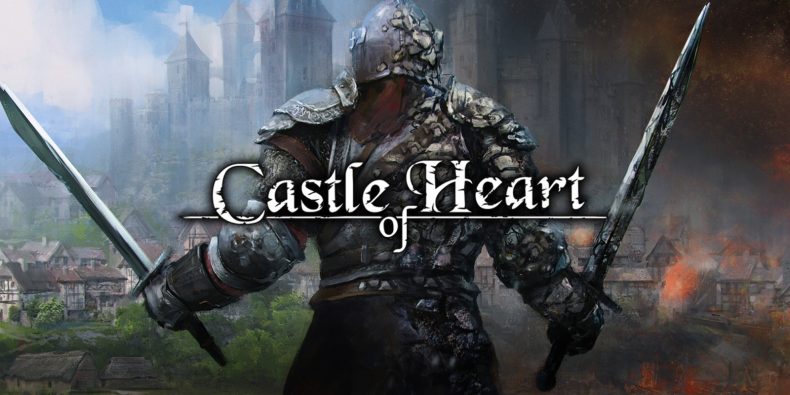 Castle of Heart is not like Dark Souls. Can we just establish that? Read it, let it sink in, and appreciate that I have played both games and, regardless of what you may have seen elsewhere, I’m categorically stating that the games are not alike. The former may crib off the latter aesthetically, and it’s certainly frustrating, but that is precisely where the similarities begin and end.

You play a knight who loves a princess, but who has been turned to stone along with the rest of his village by an evil sorcerer. The sorcerer has taken the princess, but not before she shed a single tear that touched the stone knight and brought him back to life. Why? Who knows. There’s little real story to Castle of Heart, but needless to say, the Knight sets off on a quest to rescue her. Paying homage to classic titles like Super Ghouls N Ghosts, it’s a side-scrolling 2D adventure that riffs off FromSoftware for the gritty, detailed visuals, but not much else. In a fairly mediocre experience, the graphics are one of the main positives, as crumbling buttresses and frozen parapets flicker under the light of roaring fires.

As an action game, it’s hit and miss. The combat is pretty one-note throughout, despite a variety of secondary weapons. Enemies line up to fight you, throw things from a distance, or else stand still and wait for you to hit them. Because the knight’s health is constantly draining, and can be further depleted by using his charged attack, every hit counts. Sadly there’s little to help you avoid damage. You can roll with the right trigger, but only forwards, and you can block to reduce damage, but movement is clunky and the damage feedback non-existent. Lose enough health and your arm will drop off, meaning you’re limited to swinging your sword, and can’t use bombs, throwing knives, or any other secondary weapon. The 20 levels are full of traps, from crumbling floors, exploding barrels, swinging balls of spikes, spike pits, spiked platforms, spiked walls, falling spikes… You get the picture. There are lots of spikes. Some of the more exhilarating moments come when you have to simply run, often to escape an enemy, and must jump, slide, duck and swing your way over and under lethal obstacles. These moments are fun, but mostly because they break up the monotony of the minute to minute gameplay.

Each level is filled with scattered collectibles, but they add nothing to the game. There are five Pieces of Heart to find in every stage, as well as red health pickups, and blue energy that doesn’t seem to have much of an effect on anything. You’ll occasionally find chests, but they only contain the same standard items as you’ll find simply lying on the ground. Combat feels loose and undernourished, while the whole experience would have benefitted greatly from even a rudimentary skill tree. As it is there’s no way to improve or adapt your knight even as the enemies slowly change and become tougher. Even the opening few levels are frustratingly hard, but it’s at least off set by the lenient checkpoint placement.

There are elements to Castle of Heart that are fun, buy sadly the story and gameplay are often lacking in any real thrill or panache. Those hankering after a side-scrolling challenge who don’t have access to Ska Studios’ Salt & Sanctuary might find a few hours’ enjoyment here, but most others won’t find a great deal to stick around for.

An average adventure that fails to excite or entice.