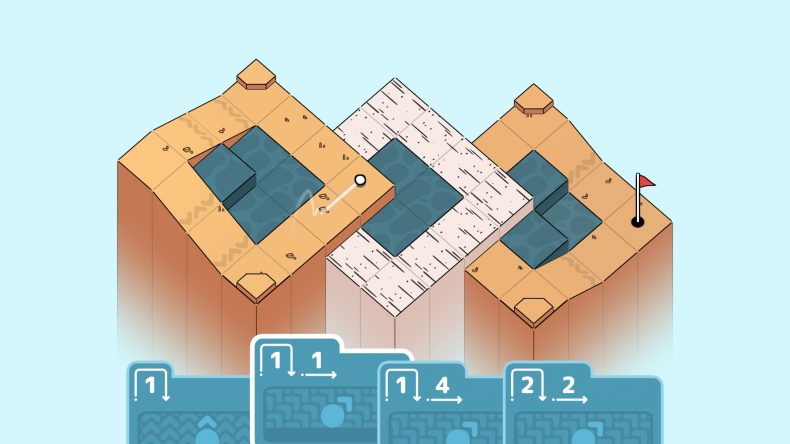 So, the inevitable has happened, PS Vita production has been halted and that stunning handheld has finally ceased to be. It was a good run, but ultimately Sony all but abandoned the machine shortly after the initial wave of first party software. Thing is, Nintendo have shown how Sony could have made the Vita a true success, if they had put their minds to it.

The Switch is a great machine, and more than fitting to take the crown of the handheld for indie games, as well as a console for home users. Because the Switch is such an excellent platform for indie games, we’re seeing a lot of iOS developers bringing their wares to the machine, and it’s allowing us to find games we wouldn’t otherwise know about. Take Golf Peaks for example, a game I never managed to find because it doesn’t come up in any of the top suggestions by typing ‘Golf’ into the iOS App Store search. Hell, you’ll find Snooker and Solitaire games well before you find Golf Peaks, which is a shame as this is a decent puzzle title – and one that should pique your interest (see what I did there?) Let’s deal with the elephant in the room first: yes, this costs £4.49 compared to £2.99 on iOS (the Switch premium strikes again). Thing is, you now have touch screen and button controls and it’s incredibly easy to play it on your big television screen without a £200 attachment on top of an £800 tablet or phone, so overall you’re up considerably, money-wise. It’s funny, I’ve often moaned about game prices on the Switch before, but sometimes you really have to think about whether an overall cheaper cost really benefits you.

So, let’s talk about the game itself. Golf Peaks is a charming isometric mini-golf puzzler that sets you up with a limited amount of shots and types with which to hole out on a series of courses. There are no windmills or dinosaurs here; instead the courses will be increasingly littered with a series of hazards which you’ll need to figure out how to bypass using the limited amount of shots at your disposal. You can aim your shot in any of the four directions you have available to you, but you’ll need to select your shot from one of the several types lined up at the bottom of the screen. So, you’ll have your standard shot which can move the ball from one square up to nine, then you’ll have chip shots which allow you to jump the ball over obstacles or onto higher areas. These can vary in air distance, but can also carry upon landing. Understanding how these shots work and spotting your route from beginning to end is what Golf Peaks wants from you, and a lot of the time it does enough to make you realise what the solution is but still make you feel like a genius for working it out. There are too many puzzle games out there where you’ll kick yourself for not figuring it out sooner, but somehow Golf Peaks avoids that.

Courses start off with ramps and eventually progress onto jumps, then warp holes and eventually conveyor belts. Generally you’ll be able to trace a route from end to beginning, or you can luck out and figure it out through blind luck, but Golf Peaks never feels like it fed you that solution; it often feels like a natural thing to do. Working out how the hazards work and using that to your favour is key; for instance, mud will swallow your ball should it land on it, requiring you to restart, but you can roll the ball over it. Water on the other hand will sink the ball, but put it back on the last surface it was on before submerging. So you not only have to consider the shots at your disposal but also how you can use the hazards to your advantage too. Where most games fall but this game doesn’t is in the introduction of new mechanics. Completion of a world sees new hazards introduced, but old ones are never forgotten, meaning that you’ll need to work out how to combine previously learned elements together. This is good considering Golf Peaks considerably short run time doesn’t have you learning pointless new things over and over. Golf Peaks is a bare bones production, with a nice serviceable aesthetic and calming sound, it’s a lovely game to relax with. You won’t find anything that’ll tax you to the point of frustration, but maybe that’s something that would have been welcome? Just to really get the synapses firing?

I guess what I’m really trying to say here is that Golf Peaks isn’t going to make everyone want to take up golf or have everyone salivating, but as a palate cleanser, as a calming experience after a frustrating gaming session or the terrible tension in, say, Resident Evil 2, then something like this is welcome. Let’s face it, we all need somewhere we can turn to help us calm down in today’s world, and for this price it’s hard to not give Golf Peaks a recommendation. Just try not to blitz it right away, or it really won’t last.

A calming experience
Cheap
Never forgets what it taught you before

Looking for a change of pace or an escape from the stress of the rat race? Then Golf Peaks can provide you with a brief respite from the daily grind.