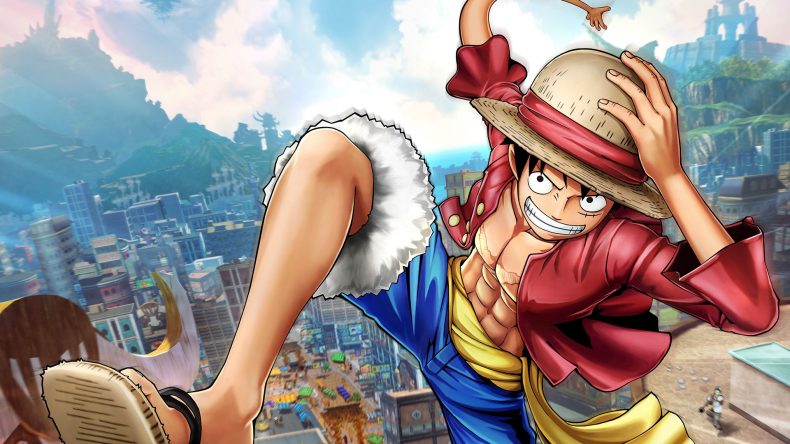 Oh to be the Pirate King, to sail to the Grand Line, find the legendary treasure of One Piece and claim the title of the greatest pirate in the land…that’s the tale of Monkey D. Luffy, the likeable but one track minded leader of the Straw Hat Pirates. The One Piece Series has been going for a long time now, with the manga closing in on it’s one thousandth chapter; that sort of lengthy success would always invite videogame adaptations.

Like most pirates, the call of treasure is too good to resist for the Straw Hats and so they find themselves on Prison Island, a former mining colony now known for being under the control of the navy and home to several prisons for sea-faring ne’er-do-wells. Now, after falling for an ambush, Luffy and his cohorts set about righting the wrongs on the island while they make the necessary repairs to the Thousand Sunny, which just so happens to take as long as the time you spend doing the game’s main quest line. What’s here is a Breath of the Wild-style open world mixed with spatterings of Spider-man’s world traversal and upgrade systems, and it sort of works.

Prison Island is a wonderful location for Luffy’s escapades here, full of lush greenland, mountainous regions and quaint towns pockmarking the landscape. There’s a considerable amount of space to explore between settlements, with items to pick up and chests to loot located in places that will take you a while to work out exactly how to get them. With this being an island under the control of the Navy you’ll find that there’s rarely a shortage of Sailors and rival pirates looking to put an end to Luffy’s quest to be the Pirate King. Like most of Bandai Namco’s anime output, what we’ve got here is an extremely competent game that is once again let down by some really baffling choices in the design process. There’s no denying that Ganbarion have really nailed the feeling of One Piece with an original storyline, and done an excellent job with the characterisation work, but it’s like they wanted to ape Breath of the Wild’s structure without really considering what made the game so special. Climbing to the top of a peak and looking out at the view is an amazing sight to behold, but getting there is normally much harder work than you’ll often want to undertake. To begin with you’re stuck with basic combat functions spread between two types of fighting stance – Observation Haki and Armament Haki – one offering a barrage of fast attacks while the other sees you attacking slowly but hitting much harder; you’ll also be limited to running and grabbing onto ledges with Luffy’s stretchy arms for world traversal. It’s quite hard going in the early stages, but once it opens up it’s so much better.

As is often the case with open world titles you’ll earn skill points for undertaking missions and defeating enemies. These points are then used to unlock nodes on Luffy’s skill tree giving him improved combat skills and most importantly, better traversal methods. I can’t emphasise enough how much things improve once you’ve unlocked the UFO or the grab launch skills, it’s just a shame that by the time you’ve got them you’ll generally only use them in the city areas because the damage caused the game’s plodding opening means that you’ve already resorted to using fast travel to get around, despite the lengthy load screens it’s infinitely more preferable to getting around on foot. I’ll admit, I got really excited when I saw the initial trailers showing Luffy soaring through the air using his arm to slingshot his way around, it does eventually gets to that point and it’s exhilarating zipping around in that manner, but it’s never as good as it feels in Spider-man. For instance, there’s a constant reticule in the middle of the screen, and that determines what Luffy is aiming at, for the slingshot to work you have to aim at something and press R1, that’s pretty simple. Where it falls down is with how close the camera is to Luffy and this makes the camera so erratic that it’s often difficult to target a point and then you’re relying on the game registering the button press, which it often doesn’t.

You’ll also find that sometimes Luffy will also clip the ledge that he’s using to slingshot himself off of as well, making him come to a halt and crash back down to terra ferma and there’s no indication as to why. So you’ll often smiley broadly as you speed through the air but also sit confused as a perfectly legitimate launch will wind with you falling back down for the umpteenth time. Then there’s the fact it only seems to work on flat-ish surfaces as well, so buildings are fine, but most of the rocky outcrops aren’t, making climbing Prison Islands many hills a tiresome exercise of finding a series of ever increasing platform steps rather than using that superb slingshot launch. Seriously, when that it works it feels like magic. Using it to speed from point to point in a village, or using it to bypass a security checkpoint does feel oh so good, but it’s hampered by a scatty targeting system and claustrophobic camera that refuses to frame the incoming scenery in such a way for you to combine launches together. There’s plenty to do on the island, with many of its citizens (in lieu of actually getting on with their days like a living populace would) just standing around looking to offer you missions or tidbits of info. There are market stalls and some places give the impression of interiors to be explored but are cordoned off with invisible walls that refuse you entry. Prison Island is a beautifully rendered place that’s unfortunately mostly window dressing than a fully realised location. This is highlighted by the sheer amount of missions on offer from citizens where you’ll see constantly reused character models for non-canon characters. This isn’t a deal breaker by any means, but when you look at the wealth of characters Eiichiro Oda comes up with for his manga arcs and you wish there was more variety, I mean, just how many people must insist on wearing a bright yellow suit with matching top hat?

World Seeker really has a wealth of missions for you to take on, from finding people to fetching items and, of course, beating people up, but a lot of the time the vague nature of them really frustrates. You’ll sometimes be given an icon of a person to find, but most of the time you’ll have an area you’re meant to search in and combing that area for the one place you’re meant to be is tiresome. Probably the best example of this is a mission where you need to find a shipping container on one of four battleships and all you know is that it’s green. I must have spent nearly two hours trying to find the damn thing because the hit box to interact with doors (and chests for that matter) is so small that you can easily miss it. Now, I understand that these faults might seem bad, but this is still at the better end of Bandai Namco’s licensed output. While you’ll start using fast travel early on, traversal issues all but disappear once you’ve unlocked the requisite nodes on the skill tree, and the story is intriguing enough to keep pulling you along for its duration. Even some of the smaller side-quests are fun to undertake because they make you go to places you probably wouldn’t have even thought of going, plus they increase your standing with certain island factions and thus give you more to do.

It’s a given that One Piece fans will get more out of this than non-fans will, but I reckon that even if you’ve never experienced One Piece before then this is a great point for you to jump in. You’ll learn a lot about Luffy and his crew and that might lead you to trying one of the best Shonen mangas around right now. That’s the thing about Monkey D. Luffy, his enthusiasm is infectious and it’s hard not in like he does after you’ve sent yourself flying through consecutive grabs across a town. World Seeker isn’t perfect, but it is still pretty dang good.

Traversal can feel ‘sticky’
Mission goals can be too vague

It was almost inevitable that One Piece World Seeker would have some faults, but it’s hard not to love the game regardless of them.