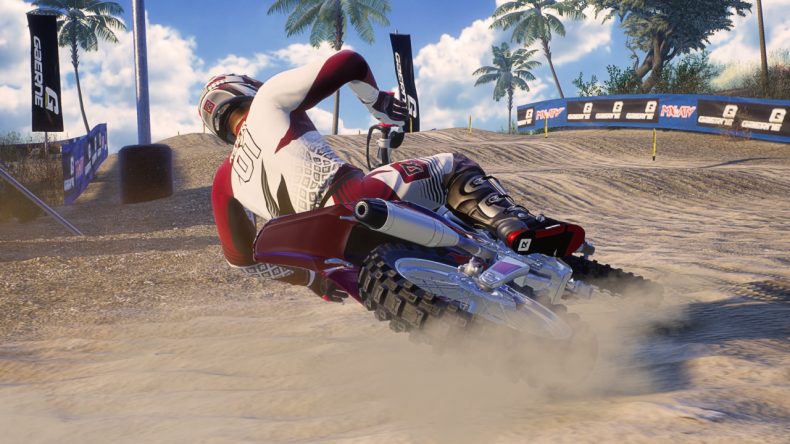 I used to love games like this, especially the fantastic Motocross Madness games on PC, before that terribly average Xbox 360 sequel made me wonder if its developer had even played the first two games. Going into MX vs ATV All Out, originally released almost a year ago but now re-released in this Anniversary Edition and bundled with a selection of DLC, I held out hope that I might have found something to bring back memories of those beloved Microsoft racers from the late 90s and early 2000s, especially as developer Rainbow Studios actually worked on those old favourites.

I won’t lie: I mostly found frustration in the first few hours, thanks to some extremely twitchy bike handling and more than a little awkwardness in the controls. Bikes have a tendency not to point in the right direction, leaving you bouncing off in random directions as you try desperately to stay on the tracks provided. The four-wheeled alternatives, the titular ATVs, and their bigger cousins the UTVs, aren’t much better, but they do at least offer a little more stability and a little less chance of being thrown from the vehicle in a spectacularly daft display of ragdoll physics. Something clicked after a while though, and I found myself beginning to really enjoy the very arcadey handling. I compensated more and more for the twitchiness, eventually accepting it as part of the challenge. I also couldn’t stop laughing at that ridiculous ragdolling.

The game begins with a short series of tutorials, designed to teach you how to handle a bike on the various dirt surfaces you’ll encounter. It teaches you how to use the right stick to lean and pitch your bike, a foreign concept in these games as you would normally use the left stick for everything. It’s this control method that can prove to be a little cumbersome at first, but if you persevere, it becomes quite intuitive. You can change it, using the classic method of everything on the left stick, but that just makes things worse as turning becomes far too sensitive and your poor rider will eat dirt a lot more often than is reasonable.

After the tutorials, you can either mess about in the open compound and grab the collectibles dotted throughout, or you can hit the menu button and jump into the various events without any real barriers to entry. I was provided with one of each vehicle, with the ability to buy upgrades that would improve their basic speed and handling, but you can buy new vehicles and customise them as you see fit with a new lick of paint, should you so desire. Despite saying earlier that ATVs and UTVs were the easiest to handle, I must admit that it’s actually the two-wheeled MX bikes on which I had the most fun. Sure, you can sometimes struggle to keep them going in one direction, but I found them far more exciting as you try to land jumps at the right angle, or keep your front wheel up over whoops (those sections of track that are made up of a series of small bumps). There’s an added challenge over the course of races too, as ruts form around the track where riders have essentially carved grooves into the mud, creating new bumps that can cause havoc around corners, not to mention deepening the mud and sometimes causing your wheels to struggle in getting through the churned-up dirt. Considering the game feels very arcadey for the most part, these ruts offer a surprising level of realism in an otherwise daft and over-the-top racer.

As exciting as the game can be however, these ruts also highlight a big issue with the AI. During multiple races I actually watched as they rigidly stuck to these lines, even to the point of slowing to a crawl in order to stay on this “correct” path, which often means that corners are blocked up by piles of riders. That said, the AI has been known to get a sudden burst of speed that propels it off the track, its rider spilling off at unnatural angles. You can’t help but laugh at it, but it’s also extremely poor form in today’s games. This unwavering need to stick to the same line is never worse than when you’re racing in the UTVs, especially when the race inexplicably begins with vehicles literally bumper to bumper. If you’re at the back of this sandwich, which you will be, there is no way you can get a good start because you’ll immediately slam into the back of an opponent. And when they get stuck in the rut on a corner? Wow. Carnage. UTVs everywhere. I’m painting a bit of a bleak picture with this talk of AI, aren’t I? Well, the game itself doesn’t exactly paint a beautiful picture either, with textures and foliage popping into existence all over the place. The textures themselves, when they’re not stuck in the void, are detailed enough and the lighting is impressive even with its lack of HDR, but its framerate is stuck at 30fps even with the power of the Xbox One X behind it. During a few stadium races, especially in UTVs, there were some nasty instances of framerate dips that just shouldn’t be happening on a game that looks like it was ported from the Xbox 360 era.

Yet despite all these flaws, there is something about MX vs ATV All Out that kept me coming back for more. Its problems are numerous and shouldn’t still be present a year on from its original release, but I found myself grinning anyway as the game reminded me of the good old days of Motocross Madness.

Despite some issues with visuals and AI, MX vs ATV All Out Anniversary Edition is somehow still a lot of fun to play and brings back memories of Motocross Madness.