previous
Devil May Cry 5 review
random
next
MX vs ATV: All Out Anniversary Edition review
0 likes 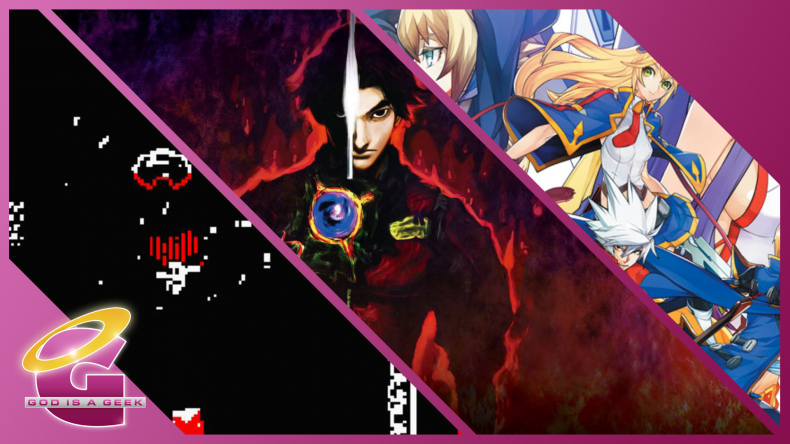 After an extended break, the Switch Re:Port is back with more reviews of Switch ports that released over the last month or so. If this is your first Re:Port Review, the team and myself look at Switch ports of new and old games. These reviews are more for how a game looks and runs in addition to how a game uses Switch hardware and whether something is indeed “Perfect on Switch”. The Re:Port Review will be back to normal scheduling now so grab a nice beverage and enjoy. Looks can often be deceiving, and never more so than in Moppin’s Downwell, a roguelike title that sees you, quite accurately falling down a well. With a visual style that is retro and stripped back you’d be forgiven for thinking that what awaits you is a fairly basic experience, but you’d be wrong. All I have to mention is the fact your character is wearing boots that literally have guns in them, and you realise straight away that this game is going to be a little different from what you’ve played before.

Controlling your character with a button push to jump as well as shooting ammo from your feet, your task is to make use of both to make it down the well safely, through a flurry of random enemies. Throughout your descent you’ll find little side rooms that contain different weapons, or shops to purchase upgrades if you’ve taken enough of the game’s currency from dead foes. Complete a level, and you’ll be awarded with a bonus that you can keep through your playthrough as the challenge gets ever harder.

Downwell’s trump card though, a little like Dead Cells, is it rewards practice in mastering movement to traverse quickly and seamlessly. The game rewards combos and fluid movement handsomely, and so before you know it, you’re not just trying to survive, but do it in a flowing fast movement, which seems a million miles away from your careful plodding of your first few runs. It means there won’t just be the game’s core gravity mechanic that’s pulling you down, but a desire within in you to descend further, to reach the next level, and look as awesome as you can whilst doing it.

On Switch, the game runs as well as the other versions on offer, with the game’s requirements obviously never pushing the system out of first gear. But what you do get with Nintendo’s console is more options than usual to play the game in a variety of ways. Whether it be in handheld like the Vita version, with a Pro controller and docked, like the PS4, or even put it in Tate mode so that you can turn the Switch ninety degrees and play Downwell in vertical glory like you would on a tablet. You can even detach Joy-Cons and stand the Switch up to save holding it in that awkward position. With controls feeling slick whichever way you play, the Switch version comes recommended due to its versatility and if you’ve yet to take the plunge (literally) with Downwell, there’s never been a better time to do so.

Originally released on PS4, PS3, with a port to PC later The BlazBlue franchise has been growing on me ever since I checked out the earlier games on PS Vita and it is great to see Central Fiction on Switch because this is the first time the game is available on a portable. Earlier entries were all on PSP and PS Vita for those who enjoyed playing on a portable but Central Fiction launched only on PS3 and PS4 before seeing a PC port. The fourth main BlazBlue game set after Chrono Phantasma is back with all DLC (and some exclusive content) in the form of BlazBlue: Central Fiction – Special Edition for Nintendo Switch.

If you’ve never played a BlazBlue game before, prepare for a fantastic single player experience with great online. Most fighters have decent stories and single player modes with a variety of online modes. Central Fiction with all DLC has a plethora of things to do including a superb story mode that might be a bit confusing for newcomers. Arc System Works games have great tutorials and while I still think the gold standard for a fighting game tutorial is Guilty Gear Xrd Revelator, Central Fiction is no slouch.

Since there was no portable release earlier, many wondered about visuals and performance for this release. Performance is superb and smooth in both docked and handheld modes. Visuals are a mixed bag in one area. While the sprites look great and the interface is clean, the environments have a lot of aliasing. This is pretty noticeable when you see a staircase in the background. This is the only visual issue in an otherwise excellent conversion. When it comes to Switch specific features, single Joy-Con play is supported which is always welcome in a fighting game. There is no touchscreen functionality but the Switch port has its own set of exclusive colours for characters.

Central Fiction is a fantastic game on all platforms but it is still disappointing to see the final game in this particular story not get a proper treatment. All the previous games had English voice acting and the final game has only Japanese voice acting.

Overall, BlazBlue: Central Fiction – Special Edition is by far the best fighting game on Switch. It was already fantastic on PS4 but having everything included here right from the get go in a port that runs brilliantly even in handheld mode makes this my favourite version of the game. If you enjoy 2D fighters and have been wanting something content packed and polished, this is all you need on the Switch.

Simultaneously released on PS4, Xbox One, PC, and Nintendo Switch and scored 8.5/10 on PS4 Onimusha: Warlords is an interesting release for a variety of reasons. When Capcom announced a remaster of the PS2 classic for all current generation systems, fans of the franchise were more than happy to experience this classic all over again and being able to play it on the go was the real draw for me. I’ve played Onimusha on Xbox One and Switch and the Switch version is my favourite for a few reasons.

Onimusha looks and runs great on Switch in both modes. It targets native resolution for both modes and delivers. In a lot of cases, games with pre rendered backgrounds are better suited to smaller displays so a lot of the visual issues are less prominent. Combat is smooth across the board which is the most important part. The Switch port also doesn’t have any cut content for those worried about anything on that front. When it comes to Switch functionality, there is no touchscreen support but the rumble feedback is very nice.

My only real complaints for Onimusha: Warlords which apply to all platforms is the lack of any new content. I was hoping Capcom would add a movie viewer for old promos and commercials or even some interviews or something like they do for other retro collections on modern systems. Onimusha is a digital only release in Europe on all platforms and the Switch version weighs in at just under 10GB. If you are inclined to go physical when possible, the Japanese release supports English and can be imported.

There’s a lot to like with this remaster and I hope Capcom considers remastering the others for Switch (and PS4 and Xbox One) in the future because some aspects haven’t aged well but this is a damn fine experience. I’ve grown to enjoy playing many older games on handheld systems and Onimusha is best on Switch for me.

Nicola Ardron
Originally released on PS4, Xbox One, and PC platforms and scored 8/10 on Xbox One QUBE 2 is an excellent puzzle game that clearly wears its Portal influences well. You play as scientist Amelia Cross trying to make sense of a mysterious alien structure. The story is quite well told and moves the game forward, but it is the puzzles themselves that keep the momentum going with a clever physics based conundrums to solve through the use of coloured cubes and a natty suit that can manipulate them.

My preferred means of playing game on Switch is always handheld and QUBE 2 holds up well with some nice visuals. There is a little bit of what looks like a visual glitch with some of the lighting work which is mildly distracting as you move around the various puzzle chambers, but otherwise the game looks and plays smoothly.

On the smaller screen the controls feel a little imprecise with the toggle buttons not quite able to cope with small movements, something that becomes a bit more of a problem as the puzzles get more complex and you need to move quickly around the space to implement the correct coloured cube. There is no touchscreen support.

The campaign itself is quite lengthy with some of the later puzzles taking a little bit more to work out, but the game does such a fantastic job of gradually introducing new ideas that nothing feels insurmountable. It doesn’t feel quite as polished as it did when I played it on Xbox One, however it feels great to sit and muddle my way through the clever puzzles again, especially in handheld mode.

Adam Cook
Originally released on PS4, Xbox One, and PC As one of the slept-on indies of 2018, it’s no shock to find Octahedron now available on Switch in the form of a “new” but also “not a huge amount added” edition of the game. Transfixed Edition, however, is a great name for the game, because the mix of platforming and synesthesia-inducing trance music really does help transfix your eyes on the screen, whether played in big (docked) or little (undocked) mode.

An initially welcoming first world soon gives way to a pulsating, difficult platform experience which, thanks to the sparse yet colourful visuals, works even on the small screen of the Nintendo Switch. While there’s no obvious, up-front content been added, there is indeed some end-game stuff, some medals, and new challenges which, while not quite enough to make you double dip, do mean you’re getting the “ultimate” version of the game.

I’m not going to go gaga and say this is the best thing since sliced bread, but it’s a tricky and rewarding, colourful, mesmerising game that is only let down because of such a steep increase in difficult from the opening to the bulk of the game. The twist (aside the soundtrack and aesthetic) is that you can create a platform for yourself once you’ve jumped, and as you progress, this platform can be switched for a different type; each type usable a different number of times.

It’s engaging and interesting, but not a game for those looking for a quick casual bounce around. This is an experience best played with headphones, greasy palms from the precise jumping, and sweaty forehead from the concentration. It’s not a revolutionary game, but it does what it sets out to do very nicely indeed.