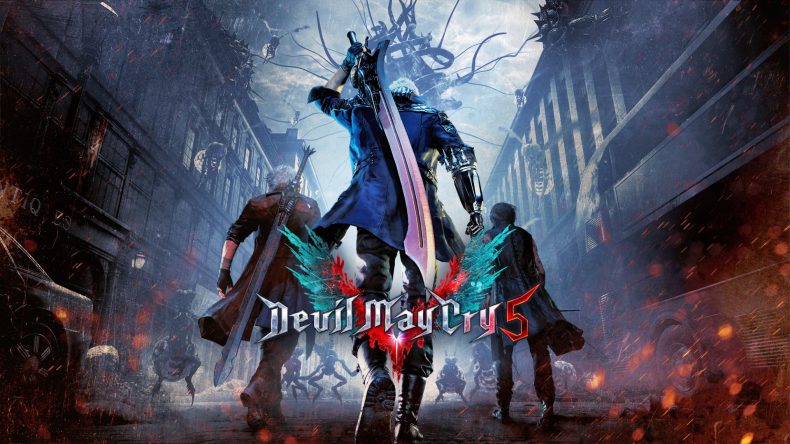 Style flows through every vein of Devil May Cry 5, never missing an opportunity to steal the breath from your lungs, fusing artistic violence and superlative combat to render you weak at the knees. It’s a staggering accomplishment and a technical marvel, constantly introducing new mechanics that don’t overwhelm you even though they probably should, and keeping a constant 60fps without any issue at all.

Picking up several years from where Devil May Cry 4 finished, Nero now has his own demon hunting agency under the banner of Devil May Cry. A brand new character known as V seeks out the help of series legend Dante to combat the widespread attacks of a multitude of demons, leading them all to Red Grave City, and after a powerful demon known as Urizen threatens the world, they must do all they can to defeat him. There’re plenty of throwbacks to previous games, including familiar boss battles and references to past characters, so fans of the franchise will have plenty to smile at. The plot itself is filled with plenty of twists, and the cutscenes that help tether the story together look stunning. The RE Engine is pushed to its limit and it never disappoints. There’re some scenes that feel a bit uneasy when involving the women of the game, and the camera lingers a little too long on their ‘assets’, and at the end of the game I was uncomfortable with a derogatory phrase used to describe them. Besides those moments, the visuals are remarkable, and I enjoyed every single one. The music helps elevate certain scenes as well, fusing dubstep and metal in the finest of ways.

The Devil May Cry series has always been known for the way you slaughter countless demons, and DMC5 is no different. Each one of the three characters has a robust move set, always evolving with the opportunity to upgrade them with the Red Orbs you find throughout the game. Nero has something known as a Devil Breaker, which is essentially a prosthetic arm harbouring lots of different abilities. Nico, Nero’s friend and inventor, builds a plethora of them as you progress, giving you abilities allowing you to slow down time, shoot explosives, and punch harder than Mike Tyson in his heyday. You can also use the arm to pull enemies towards you, helping you to keep combos going and earn that ever so pretty SSS style award. Dante has the most diverse set of attacks thanks to the new weapons introduced as you play. Starting off with Ebony and Ivory as well as the Rebellion Sword, you gain the Cavaliere, a motorcycle that moonlights as two huge swords resembling the Lancer in Gears of War, Balrog gauntlets that allow you to punch and kick with glorious aplomb, along with some other magnificent weapons. Not only that, you can change the style of your attacks on the fly. By pressing different directions on the D-pad, you can choose four attacks that aid with speed, defence, a powerful gun attack, and an advanced sword attack. Dante can also use Devil Trigger to turn himself into a demon, allowing him to do huge amounts of damage for a short period of time.

V is probably the most interesting of the three, as he technically doesn’t lay a finger on the demons until the end of their life. You control three of your own demons to attack. Griffon is an eagle capable of dishing out ranged electrical attacks, Shadow is a panther that attacks in close range, and Nightmare is a Golem that comes out to play once your Devil Trigger reaches three bars. You can also use the Devil Trigger to apply to Griffon and Shadow, allowing them to do a wealth of damage on their own. Once a red ring appears around a demon, V goes in for the kill with his cane. There are other things V can do while his demons attack, such as reading from his book to increase Devil Trigger, and getting close to Griffon and Shadow to regain their health. There are times when you’re fighting a lot of different demons, and having so many attacks at your disposal helps to earn the highest rank. Incorporating speed, combos, and a variety of attacks will get you the S rank and above. Sometimes there can be so much happening on screen you’d imagine a couple of technical missteps, but there wasn’t a single framerate drop. Even though you can be attacked by many demons at a time, you always have a grasp on it, and as that rank increases you feel like an absolute bad ass. It’s such a treat to play, and I never wanted the thrill ride to end.

As I mentioned earlier, there’s a healthy upgrade system, and by spending Red Orbs you can build up your move set, spend them on new Devil Breakers, improve Shadow, Griffon, and Nightmare, and improve all of your weapons. Red Orbs can be carried over between your characters so you don’t always have to spend them solely on the character you’re playing as. I have to say I had the most fun playing when I was Dante, but both Nero and V are excellent to control, and when I had to control them it was never a hardship. Everything about the gameplay is phenomenal, and I haven’t got a bad word for any of it. Throughout Devil May Cry 5, there are a lot of boss fights, and whilst some can be extremely tricky, they make the most of every new trick you’ve learned as well as the environment. You’ll fight demonic legends straight from the annuls of hell, as well as new ones as well. Some are monstrous, some are seductive, some are fast, and some are powerful, but all are challenging and never dull. I can’t praise the design of the bosses enough, and by the end you’ll be overwhelmed by just how incredible they are. Not just the bosses but the demons themselves are diverse, and each one pushes your abilities to the maximum.

Devil May Cry 5 is an incredible hack and slash game that plays like a dream. The design of each character is stunning, and the combat is on par with the best that gaming has to offer. The story is over the top and as bombastic as they come, but I wouldn’t have it any other way. Be prepared to fall in love with one of Capcom’s flagship series all over again.

Some cutscenes are awkward when women are involved

Devil May Cry 5 is a stunning hack and slash game and never fails to amaze. Combat this good should be illegal.