Children of the Zodiarcs Review 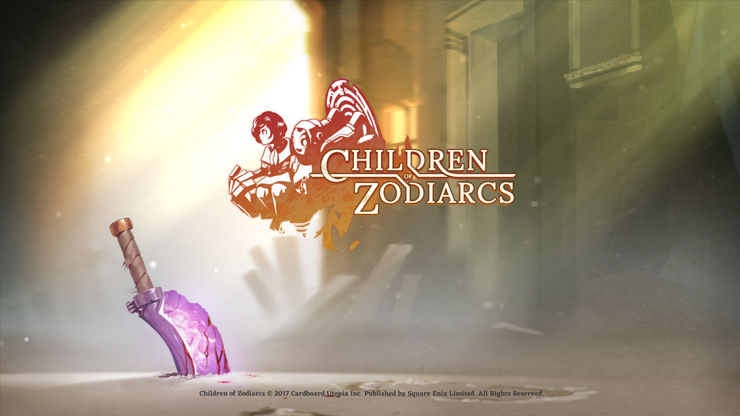 Children of the Zodiarcs has been on my radar ever since its earliest Kickstarter days. Initially the concept had been intriguing though not one that had commanded immediate interest: to create a tactical RPG with elements of a Collectible Card Game, board game, with the compelling narrative of modern-day RPGs all rolled into a beautifully stylised package.

The story follows a young street urchin-turned thief by the name of Nahmi – dubbed the Ebony Flame by her enemies – living on the mean streets of The Shambles, the poor quarters of the city of Torus. Her skills as a thief has earned her a reputation and level of infamy that means constant conflict, and her hatred of the nobility of Torus is second almost to none. Our first mission is to steal a relic, a piece of technology dating back to the Age of Apex when Zodiarcs were commonplace. This was a big score for your gang if you can pull off the heist and make it out in one piece!

First and foremost, Children of the Zodiarcs is a tactical RPG akin to Final Fantasy Tactics, Fire Emblem, and the Front Mission games of old where movement is isometrically grid-based and positioning is key. Spreading out too far runs the risk of characters being caught in a dangerous situation without the support of your team, while being clumped together within a small area will leave you vulnerable to area of effect spells and attacks. Your flanks and facing direction is also important to consider as enemies will always try to attack you from range or execute an attack from your back to avoid a counterattack.

Each character has their own unique set of cards in a customisable deck. These cards vary in type from physical attacks, magical attacks, restorative spells, buffs, or debuffs and many of them have conditional effects that can be triggered to augment the card on top of its base action. Knowing how to do so will become a large part of your strategy, but executing them will rely on a roll of the dice. Additionally, these cards will change as you gain higher levels to add further effects and bonuses, forcing you to adapt your strategy to trigger them. During combat, a maximum of seven cards can be in each character’s hand which means new cards drawn above this number will be discarded. When your hand is empty you will need to use a turn to draw more, putting you in danger of taking a free hit from the enemy without a rebuttal of your own, so be careful of this since your characters cannot execute any form of basic attack without a playing a card.

Alongside the cards are your dice which are, again, customisable and used to determine the effectiveness of the cards that you play. As previously mentioned, cards can have additional effects that are based on your dice rolls. As an example, one of Nahmi’s first cards is “Blitz” that has an additional “Free Turn” effect that lets her execute one more action afterward should at least one Star icon face upward during the rolling phase. As your levels of proficiency with the game’s combat mechanics increases, you will very easily see when you need to trade off some damage to recover hit points or raise your defence, and so forth. Alea iacta est; let the die be cast, and hope that Lady Luck is on your side.

While the dice rolls are subject to the unpredictable laws of chance, once they’ve been cast you will be given the opportunity to survey the results of each die, and then choose up to two of them to reroll once more to try your luck. The customisation of dice that allows you to combine your unused die to change one of the face-values of an active one. Once you’ve built an arsenal of surplus dice you will be able to tweak them to synergise with your cards and their triggerable bonus effects. This can get a little technical, but offers a great level of influence over the randomness to increase your odds per roll. Children of the Zodiarcs combines these mechanics together brilliantly to create a challenging yet rewarding experience. Surprisingly it doesn’t feel as though the game cheats you with the randomness at all, and that’s a marvel in and of itself. Combat is all that this game offers outside of the customisation and meta-gaming elements as far as your actions go, so it was a crucial step by Cardboard Utopia to create a combat system that avoids the trap many RPGs – especially the Japanese brand of RPGs from which it draws a great deal of influence – fall into, and that is formulaic gameplay. When you can use your abilities at whim with the only inhibiting factor being the cost of Mana or a gauge on your screen, you’re always going to use the most effect attack that you have. Taking that away and giving you only the cards/abilities in your hand and adding the random element of dice to the mix means that your ability to adapt to the situation and change tact at a moment’s notice is imperative. This game will test you with every turn.

Narratively speaking, the game offers an intriguing world to immerse yourself in; however, it does play hard on the ‘underdog’ trope and focuses heavily on the rise of the downtrodden. This is a minor criticism as it’s well-delivered and will keep you coming back for more despite the fact it’s not going to win any awards for innovation in this area. You won’t be wowed, but you will be compelled to return again and again.

As with the games from whence Zodiarcs gets its influence, narrative is delivered through dialogue between fights and combat turns. There’s no exploration or running around the game world and the only time you control the characters is in combat. This is by no means a negative point, but it’s worth mentioning as this may be an alien concept to many who are unfamiliar with these types of RPGs. Some story elements also branch out from the main path in the form of Side Quests, following the actions and events surrounding characters who have split from Nahmi’s – who you will be following most of the time – company and providing additional perspectives. Small morsels of exposition and character-building will also be given between missions in short conversations on the world map, and though these are ‘optional’ it’s advised to listen to them all. They offer more information about the world, the relationship between characters, and information that you would otherwise never hear. This is the same with Side Missions, Skirmishes, and the Arena of Xin.

The only negative point that I can make about Children of the Zodiarcs is related to the latter point of Side Missions and Skirmishes. While they’re posed as optional activities, I would argue that it’s a necessity. Skirmishes, especially, are crucial to your game because, while they offer no story progression, they are a tool to increase your characters’ levels and gather more dice. The first eight or nine missions in the game can be completed in sequence without much additional grinding required, but after this it will become increasingly unlikely that you’re going to complete missions without time spent in Skirmishes and the Arena.

The Arena of Xin will put you into extremely difficult fights with a hoard of enemies – almost unfairly so – but the rewards are worth it. The Arena unlocks around the tenth or eleventh mission when a character called Xero joins your group. You can then visit this place whenever you wish and fight ghostly apparitions for those sweet, sweet rewards and experience. I’m not usual opposed to combat for combat’s sake, but the need to grind in these areas of the game irked me a little. It’s not enough to put a black mark on the game, but I would have personally preferred a different method of increasing your power and arsenal outside of the very thing that the core gameplay is centred around.

Children of the Zodiarcs will not change the world of RPG storytelling. It tells a delightful story, however, and tells it well. This game’s innovation is in its amalgamation of card games, board games, and the digital RPG genres into a beautiful package. It is without a doubt worthy of your time.

An in depth RPG that brings together the best mediums within the genre.