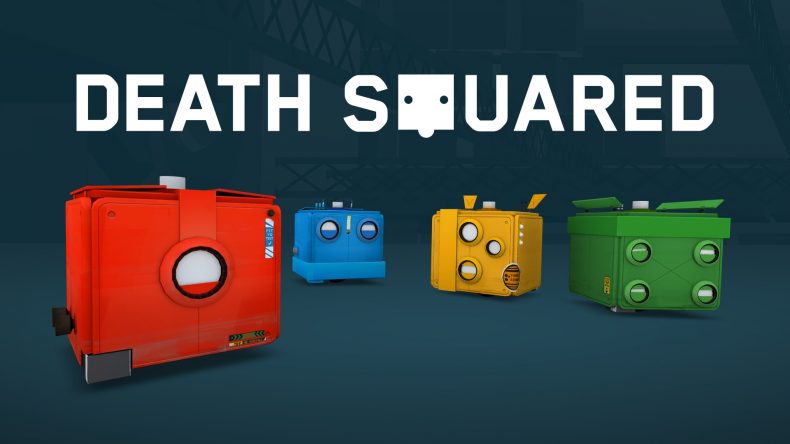 It must be a tough gig being an AI, made to perform mundane routines again and again in order to learn basic functions all in the pursuit of furthering the human race. The concept of Death Squared puts you in that scenario, with you moving little coloured cubes around a level until you hit the adequate coloured pad and the level is over. You’ll be whizzed up lifts, through teleporters and need to avoid drops, spikes and lasers, it’s no wonder Skynet rebelled.

Ok, let’s address the elephant in the room first, the robots in this game are cubes, not squares, but they do die, a lot, sometimes you’ll be able to help it, other times not and while it’s a constant learning experience death comes as an incredible frustration rather than a need to do better. Your efforts are narrated by employee of fictitious company Omni-corp David and his work computer Iris, whose primary function seems to be to berate David for not upgrading his terminal’s operating system to the latest version, a not so subtle nod to how Microsoft handled the change to Windows 10. The back and forth between David and Iris is initially charming, but never funny, and soon grows repetitive and dull. It’s incredibly inconsistent too, as David gets incredibly excited that his little robots are among the few to get past level twenty-one, only to then claim that they’re the worst bots ever thirty levels and a few deaths later. Certain things they say can feed into the gameplay as well, with later levels playing with the fourth wall by reversing your controls or spawning multiple robots as David plays with his terminal’s functions. This would be interesting if the game hadn’t sucked up all your enjoyment by that point, and as a result it winds up being irritating rather than funny.

Death is an inevitability here, and should really be considered as much considering the word is in the title, and were it just the fault of the traps and pitfalls it would be relatively palatable, but the camera disguises your place on the plane of depth. What this means is that several scenic elements are hidden and it can be hard to determine whereabouts you are as you go in and out of the screen; as a result you’ll find yourself constantly misjudging your angles behind blocks or along narrow paths causing premature death by falling or by laser. There’s an precision to the game’s physics that just isn’t helped by an immovable camera. As is the case with the Switch’s ever-growing library of titles the game is improved in multiplayer, getting a few friends to sit down and play gives the game a very Snipperclips feel as you bark orders at each other and laugh as another avoidable death has been caused by someone’s over-eagerness, but the camera angle problem is still present and exacerbated because reducing four people into a frothing rage is worse than doing it to one.

In the game’s credit, the puzzles are incredibly complex and their layouts have been really well thought out, but, while some solutions are plainly obvious yet difficult to execute, others are terribly obtuse. On several occasions I believe I managed to cheat my way around a solution rather than use the intended route, so at least there is a degree of flexibility in some of the level designs, whether this is intended or not is beside the point, because I don’t think that this is achievable in every level. Some have hidden areas to find that gives your robots new face designs so, while there’s stuff to do I don’t believe I can honestly say I want to go back and play any of them again. It’s a shame, Death Squared looked to be really interesting, it’s better with friends but the level of frustration involved just isn’t worth it.

Well thought out puzzles
Great if you can get friends together

If you have a bunch of friends with high tolerance levels readily available then it might be worth giving this a punt, otherwise, if you’re the type that throws controllers then you may want to avoid.