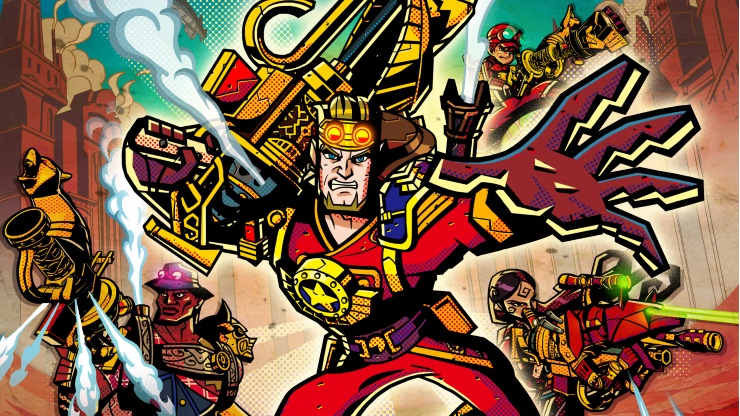 Picture the scene: my editor sends me an email asking me to look at a steam-punk-comic-book-3D-RTS from the same people that delivered one of my favourite games of this or any other decade. Immediately I want to fall in love with it.

The reality is not the Fire Emblem embellished with 19th century scientific romance I immediately pictured, but it is an utterly fascinating title that has far too much good stuff going on to let niggles ruin the experience. It is true to say that it isn’t very often that you experience something that manages to delight and confound to such polar extremes as Code Name S.T.E.A.M.

From the start you are presented with a title that is stunning, both aesthetically and conceptually. A booming, utterly hilarious theme tune rings in your ears, as crisp and colourful comic book panels set the scene. You find yourself (in true Steampunk style) transported into an alternate-universe approximation of London, where you take control of a fictionalised version of Henry Fleming from literary classic The Red Badge of Courage. You are plunged into battle alongside your cohort John Henry – the African-American folk hero here reimagined as a badass, mortar-throwing marine. Aliens are attacking our fair capital, and after an initial sortie, the two heroes are swept up (in an airship, no less) by none other than legendary U.S President Abraham Lincoln. Enrolled in the specialist titular S.T.E.A.M crew by the chin-strapped Republican founder, you become embroiled in a crackpot tale that encompasses a slew of bizzaro takes on characters from classic works of literature, and an horde of ancient Lovecraftian extraterrestrials hell-bent on obtaining the Necronomicon, which grants its owner the ability to wield incredible steam-powered technologies to be used for fair means or foul

It is a rollicking yarn, which instantly draws you in thanks to the magnificent looks and superb voice acting. Lincoln is voiced by Stand By Me child star-turned uber geek icon Wil Wheaton, who seems to positively revel in his role as S.T.E.A.M. head honcho. The geek factor is ramped up with the addition of Michael “Worg” Dorn and Firefly’s Adam Baldwin in prominent roles.

Gameplay is a three dimensional real-time strategy affair, which features first person shooting elements during attacks. On a grid based map which features geographical inclines, destructible obstacles, and areas that you can climb up onto or over, you use steam power to move and attack enemies. Everything you do consumes steam – and it all about making best use of it to manoeuvre around your environs, take out foes and make sure you don’t leave your soldiers wide open to attack. Conserving steam on a turn will put some (but not all) of your available characters into “Overwatch” mode, which allows your soldier to defend during the enemiy phase of movement. Dotted around the map are handy recharge points that also double up as little hints, allowing you to replenish your steam, and there are also save points that allow you to record your progress mid-battle. The aim of each map will usually be to reach a specific goal whilst picking off the spidery aliens, but there are also some rescue-style missions and the added bonus of collectible cogs on each stage which allow you to upgrade the weaponry and Steam power for your crew. After meeting and joining up with new S.T.E.A.M. members you eventually enter each battle with four heroes, each with a main and sub weapon, and a dazzling variety of attributes to play around with. The Cowardly Lion is anything but and can employ a long rang leap attack to pounce on his targets. His buddy the Tin Man can handily share his Steam with colleagues, whilst Tom Sawyer packs a devastating punch that can stun and knock enemies away.

Using an over-the-shoulder view, controls are tight when concerning movement, especially when it comes to employing the second analogue stick. You will rarely need to use the touchscreen during missions. The problems with Code Name S.T.E.A.M. manifest themselves in the odd design choices and the way the enemy turns are handled. Unlike most RTS titles, there is no map to view, which means you can only view your environments from the perspective of your characters. This is a very frustrating omission which can make finding the end of level goal (or anything for that matter) extremely difficult. The aiming reticule when attacking with guns, crossbows and the like can be frustratingly glitchy and inconsistent – often you can hover over an enemy and it will recognise you have a good shot, only for your attack to miss due to the ordnance striking some unseen scenery or completely missing as the crosshair had moved slightly.

Enemies continue to respawn and can be very difficult to kill and defend from when they appear in large numbers. This means that successfully negotiating the maps to hoover up all of the collectables can be an overly challenging chore. Worst of all is the fact that once you have taken your turn, the enemy movement takes place without you being able to see what they are doing, in an arduous, lengthy, unskippable mess which slows the pace of the missions down to a horrible wade through treacle. In fairness, a downloadable patch allows you to fast-forward this phase – on an old-school 3DS you can expect double-time enemy movements, with the New 3DS enabling you to whizz through at three times the speed of normal. But while the waiting times are quicker, the lack of visual intelligence means that you are still unable to track the Cthulhu-spawn, in a move that renders every stage a Fog of War style situation. Sure, you can see your S.T.E.A.M-mates getting smashed up by attacking nasties when they get in range, but in a lot of cases, especially on larger maps with multiple aliens, the enemy turn is still probably the weakest part of the experience.

Despite the flaws, this remains an oddly thrilling experience at times, and one which does make you wish to persevere through the cel-shaded Silver-Age comics romp that underpins the sometimes-misfiring action. There is so much to love. A terrific, quick-fire multiplayer mode will give extra playability after the main campaign is dusted. The art style is so striking, the opening theme tune perhaps the jolliest, most kick-ass I have tapped a toe to since the legendary Dragon’s Dogma rock extravaganza. This is a highly entertaining new IP for Nintendo who should look to improve on its premise and the best and most satisfying moments for a sequel. Until then, enjoy and appreciate all that is good about this unique romp.

Those enemy turns.
Regenerating foes create difficulty spikes.
No level maps is a glaring omission.
Targeting can be hit and miss.

A charming Steampunk romp with the spirit of the Silver Age of Comics, which stumbles thanks to some awkward design choices.