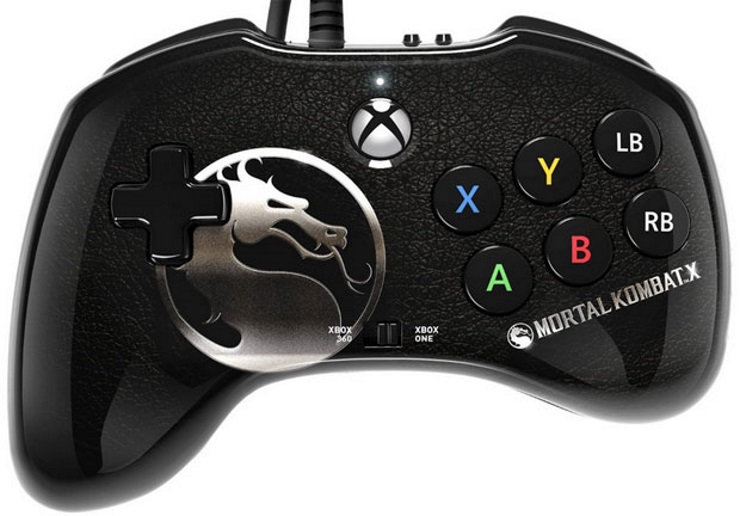 Although early in their life cycles, it’s safe to say that the new consoles have both improved their controllers, especially when it comes to Sony’s DualShock 4. In fact, for the PS3, there wasn’t a chance you’d be seen dead playing a fighter with the DualShock 3 – it just wasn’t any good to use. As someone who tends to use fight sticks more often for the genre, I actually bizarrely prefer a pad for Mortal Kombat, possibly due to the fact it requires less circular motions on the stick, so the pads usually do just fine.

Enter PDP, who are behind the official fight pad for MKX.

I almost feel I shouldn’t have to mention it, but due to a pro-type fight pad’s very nature, I will say: it’s wired. It’s also been shaped in such a manner that the grip on the left is larger than that of the right, in an effort to create optimal positions for your hands. And it works, actually.

The menu buttons are tucked away by the cable, so you’ll never accidentally press them, and the face buttons are like that of a Mega Drive/Genesis pad, in that there are six of them. The bumpers are mapped to the side of the regular four, meaning you can hit a throw or interactive background attack far quicker, with block and remaining on the right trigger, which itself is less of a trigger here, and more of a click button.

Actually, all the buttons respond quickly with a clicky sound (like that of a mouse, almost), and coupling this all with the fact it’s incredibly light – well, you’ve got a comfortable fight pad, here, though the button responsiveness took some getting used to. There are micro-switches underneath the buttons, you see, which means you don’t need to hammer them to have them respond. Put simply, you can whip across the face buttons very quickly to pull a combo off, but the triggers don’t feel quite as good.

The main area there’s room for improvement, however, is the D-pad. While it’s definitely better than a stock console controller, it definitely feels as though it could be iterated upon for future hardware revisions and releases. Interestingly, on the Xbox edition, there’s a switch that changes it from a 360 pad, to an Xbox One pad. A nice addition, of course.

It’s difficult to cater for everyone, but PDP have put out a solid effort, here. Some will love how light it feels, others will feel differently. I think it’s a welcome option to have as an alternative to a fight stick, and one that definitely comes out for multiplayer sessions. There are very few options out there at the moment for these new consoles, and the MKX fight pad is a decent first entry.