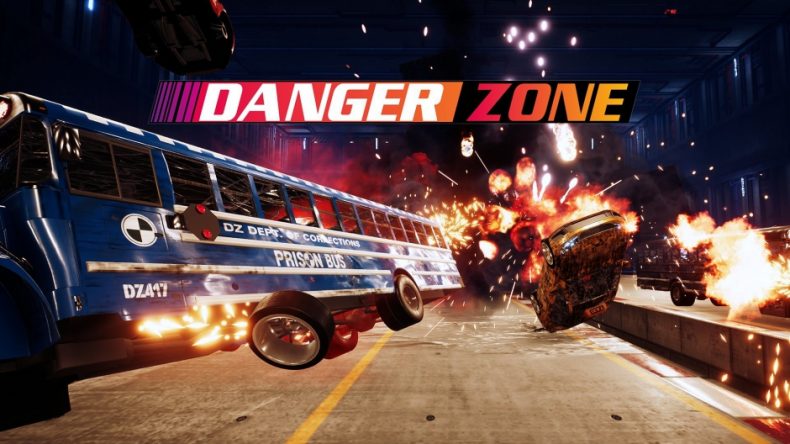 There’s something about Danger Zone that grabs you buy the short and curlies and keeps you crashing your car over and over again; not in a sadistic way (well maybe a little), but in a way that has you strategizing every traffic pile up. It’s a simple game lacking certain elements that’d make it much better, but for what it is (and for how much it costs), Danger Zone is alright.

Your goal is to score as many points as possible by taking part in crash tests that thrust you into different scenarios set across four phases (formerly three if you only played the PS4 or PC version). You score points (or cash) by causing as much destruction as possible by derailing oncoming traffic dependent on the way it’s flowing. Some tests have traffic moving left to right on a freeway, others have you driving head on, over bridges, and straight into stationary vehicles as well. You’ll also drive different kinds of transport – some slower than others – and factoring in the speed and size will go towards how many points you’ll score. There are cash icons you can collect on these courses and by collecting them you’ll add to your score. If you manage to collect them in order, you’ll get a bonus – get the bronze ones first, followed by the silver, followed by the gold. Initially, you’ll break the flow of traffic by simply crashing into transport, but by activating something called a Smashbreaker will cause more damage (essentially you cause a massive explosion, but still manage to stay in one piece somehow), and also allow you to garner momentum to move across the roads after impact. Normally, the Smashbreaker is activated after you’ve made a certain amount of cars crash, but also there are icons that’ll give you extra, so you can at times activate a good run of them. Once you use one of these, your car will fly in the air, and you can then move the car in different directions to either stop more cars by crashing into them, or collect one of the cash icons.

It’s a pretty simple game, but it works once you’ve got to grips with the point of it all. It took me some time to appreciate it, just because it’s very bare bones and lifeless, with relatively weak visuals and seldom modes. In fact, you’re only bound to the four phases and that’s it. Sometimes the tests are set outside, but for the most part you’re stuck in a dingy warehouse. Still, it does have plenty of replayability as there are online scoreboards, and with every attempt you’re shown how well you’ve done compared to the rest of the world. In terms of progressing, you need to at least get bronze, which isn’t too tough, but some tests can take a bit of time to work out the best way to cause the most damage. My biggest complaint about the game is the lack of camera control. It’s rather tricky to look around and see what’s happening, or where the icons are. After triggering a Smashbreaker, it’s a case of moving around the car and not simply looking quickly to the left or right. If this was more fluid and versatile it’d be much more enjoyable, but it ruins the experience a little as it adds frustration where it doesn’t need to be. You’re also lacking in car control as well, but I believe this is on purpose. Still, a bit more manoeuvrability wouldn’t have gone a miss.

That’s about it. Danger Zone is straightforward and simplistic, but it does offer a few hours of fun. It’s ideal for fans of Burnout’s Crash mode, and for anyone that loves to cause a bit of mayhem. It’s also worth mentioning that on Xbox One X it offers two visual modes that either prioritise a higher frame rate or better overall fidelity, which is a nice touch. There’s more reason to play thanks to the online leaderboards, but with little to do outside of the four phases, and with the camera work halting your strategic approach to each level, it will lose it’s appeal fast.

Whilst it may not encapsulate the wonder of Burnout's Crash mode, it's still quite fun, and will give you something to do for a few hours.

Danger Zone brings Burnout’s Crash Mode back to us, today

Danger Zone gets a release date and new trailer