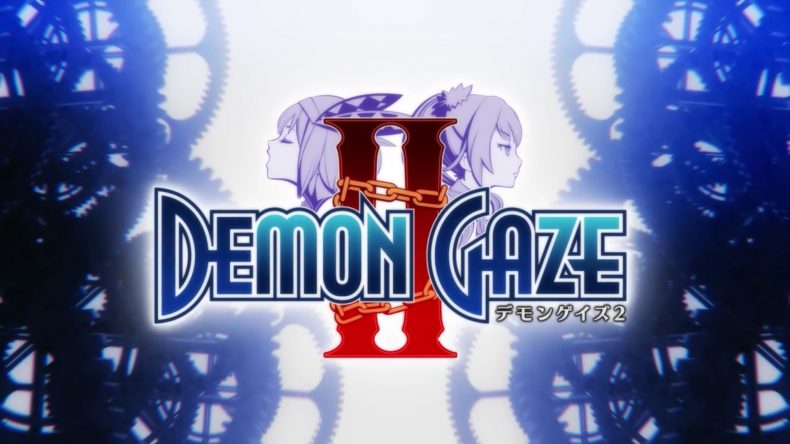 When I played the original Demon Gaze on PlayStation Vita, I was rather new to the DRPG genre and didn’t enjoy it as much as I did when I replayed it a year later. A few years have passed since then and for a while it felt like Demon Gaze II would remain as a Japanese only title. Thankfully NIS America finally announced the localization and a PS4 version which surprised me. I’ve been playing not just Experience Inc. games but dungeon RPGs in general on handheld platforms so playing this on the PS4 has been interesting and Kadokawa did a great job with the port. While it has a few flaws overall, I thoroughly enjoyed the time I’ve spent here.

Demon Gaze II is set in the city of Asteria. The background CGI images are lush and pleasing to look at. You play as someone who has lost all their memories but back in contact with two of your childhood friends. You were all orphans taken into Stella’s Palace and have formed a Revolutionist Party. The story involves a radio station broadcast program, finding the truth to why someone vanished, and more. While the story isn’t groundbreaking, it serves as a nice palette cleanser in between sessions of dungeon crawling. The main NPCs are mostly well written and I enjoyed the banter here and there in between story sequences. Dungeons are obviously a big part of the experience (I promise I will stop) and these exist in the Restricted Zones of the city. Your aim with dungeons is to take over demon circles through the use of gems and defeating enemies that spawn in. This will allow you to get some good gear depending on the gems used and get closer to reaching the boss of the area. Once you control all the circles in one area, the portal to the demon’s realm. This is where you have to solve some basic puzzles (these get more involved as the story progresses) and eventually fight the boss. More and more demons will join your party and your cause as you defeat them with more than 15 playable characters overall.

Since this is a DRPG, combat is turn based and there have been a lot of quality of life enhancements to the experience in combat and in dungeons. Your star gauge on the top left of the screen lets you know how much you can use your demons in their demonized or stat boosted form. It fills up the more you fight. You can speed up each encounter, auto move through areas you’ve visited already, and a lot more making this feel more polished than many of the other recent games of the sub genre. The one gameplay mechanic I didn’t much care for is the maintenance mode. I’m no stranger to “rubbing” mini games after playing Moe Chronicle through an import on Vita already but it doesn’t feel well thought out here. You can date your demons as well to learn a bit more about them but it feels like a pointless addition to a formula that already worked well.

I was initially skeptical about how this would look on the PS4 since many games that were Vita only and then ported to PS4 haven’t looked too hot. Ultra Despair Girls in particular looks quite bad on the big screen. Kadokawa has done a brilliant job here with characters and dungeon designs on the big screen. There is only one single UI aspect that is low resolution and it is the small circle in dialogue boxes that shows the character face. The rest looks crisp and it doesn’t feel like a port outside of some UI elements being a bit too big. The big complaint I have with the visuals lies in the text though. The text boxes for dialogue are huge on the TV and yet the text content is squished to the left or middle. The font choice isn’t terrible like Bad Apple Wars but it should’ve been better. In some cases one bit of dialogue had the text left aligned but the next sentence was center aligned. This shows a lack of polish and I even had a few instances where some text was just cut off or incomplete in the menu. Another annoyance is in the inconsistent enemy design. Some of them look great but others completely out of place. While many games have dual audio, Demon Gaze II has both dual text and dual audio options. You can mix and match between English and Japanese text and audio. Both voice acting languages are an option because they both are done well. The original game had a lovely vocaloid soundtrack and the one here feels like a combination of the tunes in Demon Gaze and Ray Gigant. This extends to the interface sounds as well with an upbeat jingle on completing a quest that would fit right in with Experience Inc.’s Ray Gigant.

After more 30 hours with Demon Gaze II, I’ve still feel like there’s loads left to do. This is a great conversion to PS4 and it almost feels like they started out planning for more than a Vita version because outside of one UI element, everything looks great on the big screen. Demon Gaze II is also the first DRPG on the PS4 and this was definitely an interesting experience for me considering I’ve played all the others on handheld platforms. Experience Inc. continues to impress me and I’d say this is a great game to get into the genre with. It has multiple difficulty options for both new and experienced (sorry) players and doesn’t look like a low resolution handheld game on the big screen. 2017 has turned out to be a fantastic year for NIS America for sure.

Demon Gaze II improves on the original in a lot of ways and is another excellent dungeon RPG from Experience Inc. that is worth your time.