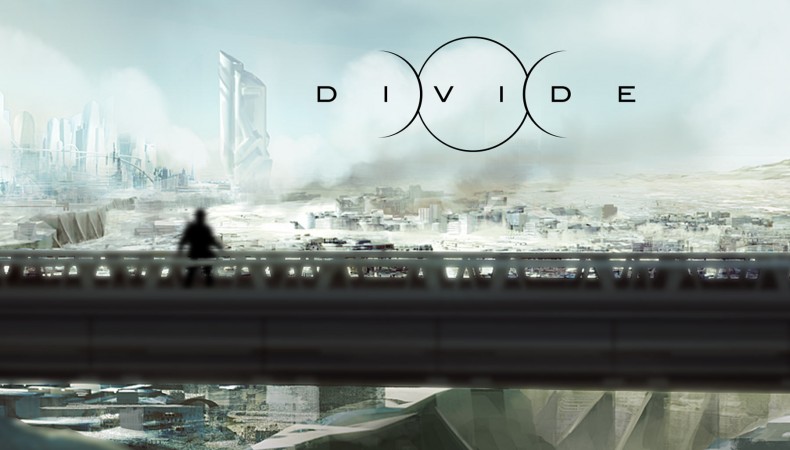 I used to love a good isometric shooter, especially during the early days of the PSOne. Particular favourites were Project Overkill and Crusader: No Remorse. I have a soft spot for isometric adventures in general, such as Little Big Adventure and Ultima VIII. In Divide, there is a strange fusion of the two styles: a story-driven adventure with isometric shooting of the twin-stick variety. Right from the start, there are glimpses of something special. From the stunning title music that riffs on the musical stylings of Deus Ex: Human Revolution, to the mysterious and action-packed opening segment, there are hints of a game well beyond the means of Exploding Tuba Studios’ low budget sci-fi game.

You play as David, a single father whose late wife worked for a shady company. When her old colleague shows up and gives you a mysterious case, claiming that her death may have been work-related, David’s life takes a turn for the strange. This leaves you stranded in an unknown location, your daughter Arly missing, and a hell of a lot of explanation needs to come your way.

The story rarely gives you any of that explanation, though, only drip feeding bits and pieces that may or may not offer insight into the overarching plot. But this lack of explanation also extends to playing the game too, as almost no information on how to play the game is forthcoming. Now, I’m all for a bit of mystery in stories, but not so much when it comes to actual game mechanics that are vital to progressing. Once I finally did get a grasp on what I was supposed to do (via the age old method of trial and error, something us gamers just love…) Divide started to get going. Controlling David is simple enough, the left stick moves and the right stick aims in 360 degrees in the usual twin-stick shooter way, but things become a little more complex, unnecessarily so, with the rest of the controls. Holding L2 readies your weapon to fire, then a press of R2 pulls the trigger (more on the silliness of that in a moment), with L1 allowing you to sprint. R2 on its own is the interact button, but almost every interaction requires a radial menu kind of thing, making simple tasks that much more complicated than they need to be. This can be overlooked during the quick hacking of a computer, but when you’re attempting to overload an enemy security bot while avoiding its sensors, it becomes a bloody nightmare.

But the shooting. Oh, the shooting. I don’t mind having to ready your weapon with one button and shoot with another (I’m a veteran of Resident Evil, after all) but the actual movement and aiming are so clunky that combat is far more unwieldy than it should be. Again, that can be forgiven if the shooting felt weighty and satisfying, but your gun can only shoot once every few seconds, needing to cool down after every shot. This can be upgraded as you go on, but only via spending upgrade points to hack certain machines, that the game never actually tells you about. And again, this slow cooldown period would work if your weapon had any kick to it, but it takes at least two or three shots to take down an enemy and those enemies don’t have the same cooldown limits as you. And guess what? You can only take a couple of hits before you die, unless you upgrade your health at specific machines. Baffling design.

Level design fares no better, with labyrinthine environments and a map as useless as a chocolate teapot. There was a point during my time with the game, when my companion wandered off to a terminal and I was left running around a maze of identikit corridors and stairs with no idea where my objective lay. This went on for an hour, as I basically had to brute force my way through by literally searching every room and hoping for a pop-up that would signal my success. This happened multiple times, but luckily the repetitious design actually helped me to realise what to do next. Divide does have some redeeming qualities, such as its soundtrack. It’s pure electro-synth, evoking classic sci-fi and cyberpunk vibes that really help to sell the setting. This comes across in its art direction too, with some impressive visual design at times. It has a nice, cinematic edge when it switches the camera angle during set cut-scenes, displaying matte backgrounds to surprising effect. One particular reveal works wonders due to this change of camera angle, and it shows just what Divide is capable of when it tries. It’s just a shame these moments are so rare.

The story is almost worth the effort, with its nice blend of soft, parental moments and full-on sci-fi madness. It goes in directions that would work so much better with actual character development though, as the main villain is given no introduction whatsoever, nor is he given any screen time to be of any interest. David himself is fairly bland, thanks to some phoned-in voice acting and awkward writing, and the little character portraits (that can be turned off, mercifully) are reminiscent of 90s 3D models, complete with comically bad poses and expressions.

All these issues combine to keep Divide’s story from really taking off, and its awkward controls and combat stop its gameplay from helping it to shine. A twin-stick shooter with a more cinematic and thoughtful approach, everything seemed right in theory. But in practice, it’s a confused mess of tedious and repetitive gameplay that offers brief glimpses of what could have been.

Divide could have been an interesting, indie sci-fi game, but poor design decisions hold it back.