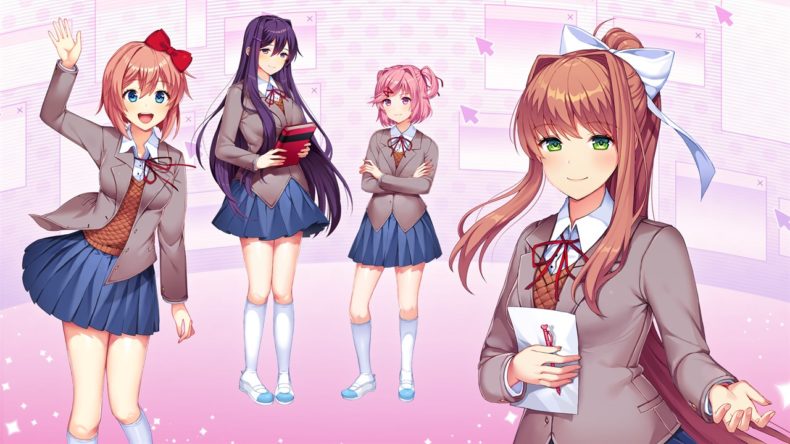 Doki Doki Literature Club Plus! is not a happy game. Probably an obvious statement if you know what it’s truly about. However, the true nature of its psychological horror is more unsettling than I assumed it would be. On the surface, it looks like any visual novel dating sim. Colourful settings, bubbly music, and two dimensional characters vying for your attention. For the first couple of hours, it feels like the warnings about its mature content are misplaced. You listen to four girls talk about cupcakes, poetry, and love. No hidden meanings. Just blatant romantic nonsense that feels as unoriginal as expected.

It isn’t until the seeds of what eventually comes to pass start to be planted. A few out of place words in a remark. Truths that don’t seem to sit right with the characters you’ve begun to befriend. Then, it hits you. The big event that flips the entire game on its head. DDLC Plus! is horrifying. Everything you’ve read about it is true. Depression, suicide, bullying. It takes the insecurities of youth and implants them into your consciousness. From the moment everything changes, you realise just how smart Dan Salvato’s passion project is.

There are things DDLC Plus! does that break the fourth wall and mess with your head. Outside of the story, glitches start to break the game, dialogue appears all jumbled and illegible. The four girls act out of character and their simple sprites take on some bizarre forms that leave you uncomfortable. The bouncy, generic music starts to distort and transpose, with notes falling out of place and melodies abruptly ending. Nothing about it makes sense, and you’re left trying to work out what the hell is going on. 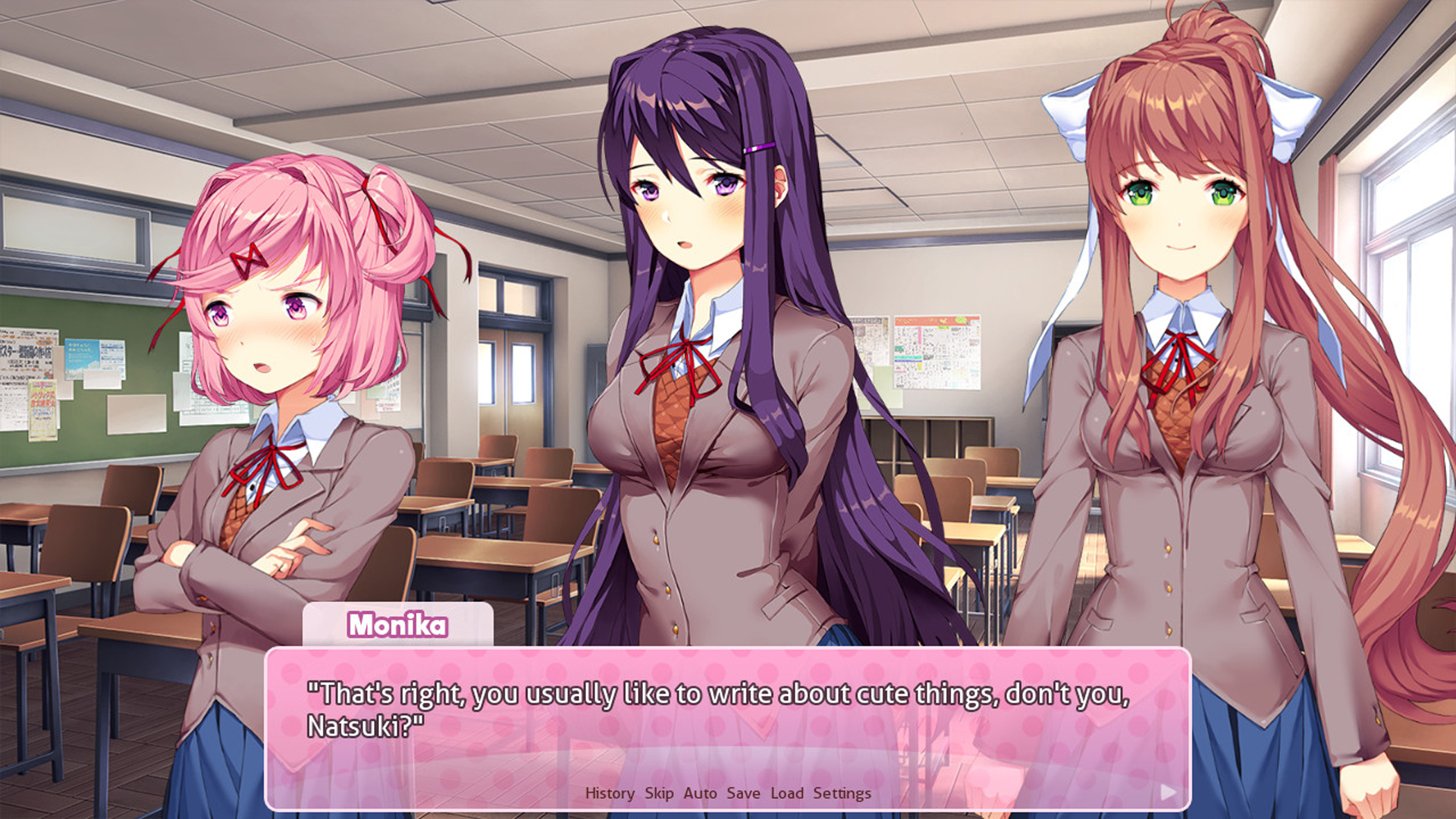 The main premise follows the protagonist as he struggles to find a club at school. His long-time friend Sayori tells him to join the literature club. At first, he’s rather dismissive of it, but soon starts to enjoy spending time with the other members. Monika is the club’s president, a popular student who left the debate club to start the literature club. Yuri is the quiet, shy girl who is best described as an emo with a penchant for fantasy. Natsuki is a fiery and young student who is always rather defensive. Finally, Sayori is outgoing, positive, and full of life.

As you spend time writing poetry and building bonds with the characters, the protagonist becomes a fan of writing, being a part of the literature club, and basking in the company of the four girls. There’s a formulaic approach to its gameplay that sees you contributing with poems over a few days. By sharing your work, certain girls will appreciate your poetry more than others. Each poem you ‘write’ requires you to pick from a wide variety of words. Some deeper or descriptive words will appeal to girls like Yuri, whilst flowery or cute words might be more appreciated by Natsuki or Sayori.

You learn who appreciates what type of poem, and from there you get closer to certain girls. The more these connections are made, the more one girl might grow closer to you. It doesn’t take long to play through the game to get all the different endings, but each time it ‘restarts,’ things get even crazier. The themes DDLC Plus! explore are dark. One of the major plot points hits you quite hard. Firstly, you’re left with a heavy heart. Its impactful and rather unexpected. Secondly, you’re carried into another shocking moment that leaves you vulnerable and oblivious to what the fuck is going on. 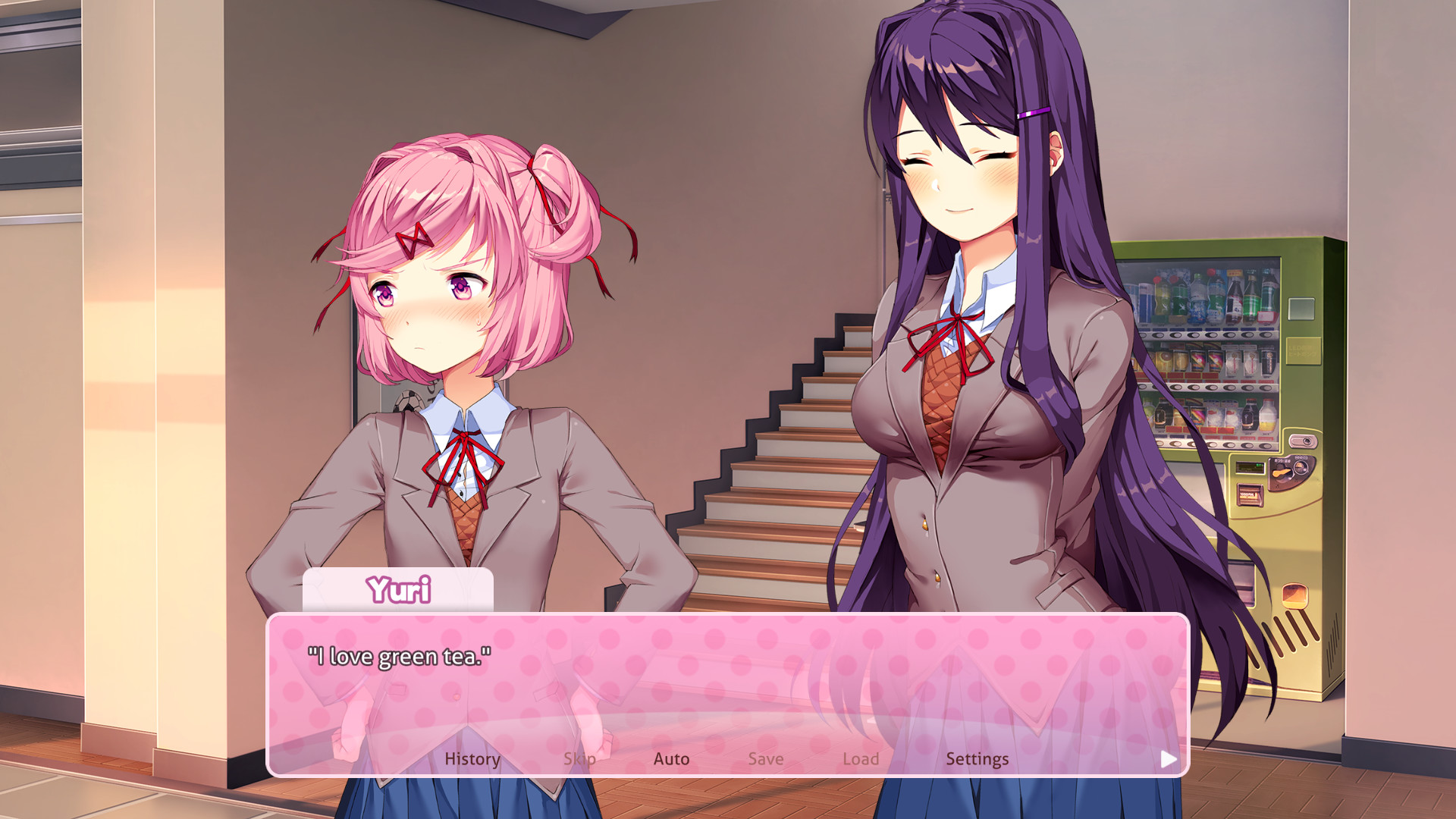 It’s difficult to go into any more details. If DDLC Plus! is something you want to play, then go in as blind as possible. The content warning is important, though. There’re scenes that will affect you if you struggle with mental health. Whilst the game doesn’t glorify it, it does feel as though it’s used as a story beat than treat it with the respect or sensitivity it deserves. Of course, that’s only a personal opinion, but it is worth being aware before you start playing.

If after finishing you want more, DDLC Plus! offers some side stories that explore the friendships and origins of the girls that sit outside the main story. They are short, but often sweet. There are images to unlock and view from the main menu, new tracks, and updated visuals to provide a full HD experience. These additions aren’t game changers, but they are going to please the hardcore fans of its original release.

Doki Doki Literature Club Plus! is a thought-provoking visual novel that takes tropes of the genre and does the unthinkable. It’s a psychological horror that plays with your feelings and your mind, however, it’s not always as tactful as it could be. Still, it’s smart and adventurous with the right amount of content to give returning players a reason to come back. If this is going to be a new experience for you, take heed of the warnings and play at your own peril. It’s messed up, but highly original, and never afraid of the subject matter it approaches.

Doki Doki Literature Club Plus! is a psychological horror that takes strides in the genre, unsettling and challenging you at every corner.