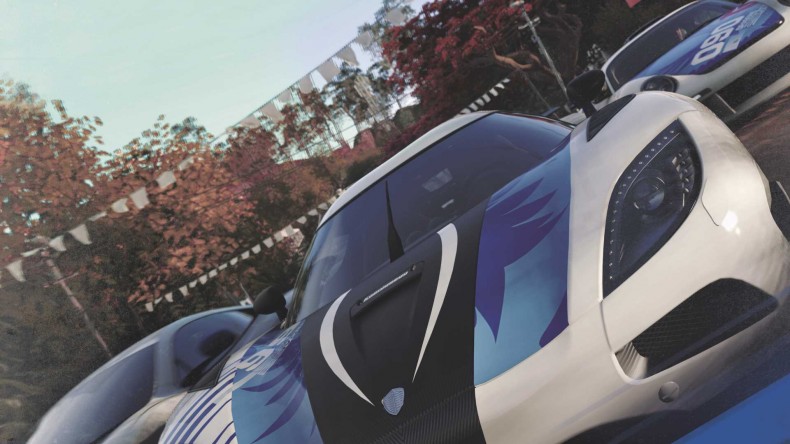 DriveClub VR gets off to a bad start for two reasons. Firstly, it’s had a significant graphical downgrade from its original PS4 counterpart. Backgrounds look bare and blocky in places, pixelated edges and blurry textures are common occurrences, its graphical prowess and fidelity, beautiful, crystal clear vistas and amazing weather effects have been sacrificed in order that the game retain a smooth framerate. The second reason is one that it shares with the original game: things start off too slowly, and you’ll drive boring cars in easy races against uninspiring AI. It’s an unimpressive opening hour or so.

However, if you’re willing to accept that the graphical downgrade is a necessary evil to keep the driving mechanics and sense of speed intact, once you settle in, find your rhythm, turn off those braking aids, crank up the difficulty and start focusing on racing your best race, you may find most of that initial disappointment disappearing into the distance behind you. The essence of what made DriveClub such a great driving game in the first place, its exhilarating arcade handling, is still right here, in VR; now you’re actually in the car, on the road, and it’s really quite something to behold.

Racing games are a perfect fit for VR and it’s amazing how the simple act of slipping on your headset can make the most mundane things seem almost magical. Driving through a tunnel, taking a sharp bend, moving through a tight pack of opponents, pelting down a steep hill at top speed – you’ve done it all before but it’s never felt as good as this. Take a look around the stunningly detailed interior of the sports car you’re sitting in, look behind you into the back seat, glance at your wing mirrors or down at your gears, hell, even stick your head out the window and have a look back down the road. It doesn’t matter how much of a gimmick it is, it’s fantastic, it’s immersive and it adds enough excitement to the experience to go some way towards compensating for what’s been lost graphically.

In terms of content this is also perhaps the most fully-featured game in the PSVR line-up so far. Most of the content from the original game is here and it also includes five new tracks for veterans to get excited about, although unfortunately your old save data isn’t compatible with this version so you’ll be starting out from scratch. There are a ton of tracks to get to grips with and cars to unlock, all of which still handle differently, and even the multiplayer mode makes it over intact, although I have to say the lobbies have been pretty quiet in my experience and it’s a regular occurrence to find yourself racing against just one other human opponent.

The AI opponent count has also been downsized which is a shame and it takes away from the frantic nature of race starts and tight jams as the field moves through the first few corners of a track. Elsewhere, however, all of the old online stats, clubs and challenges remain intact and racing to beat a friend or rival’s top drift or cornering score is as addictive and seamless here as it’s ever been. This is a full-fat version of DriveClub at a price point that puts some more expensive, less content-rich PSVR launch titles to shame.

Overall, DriveClub VR is a graphically downgraded but fully-featured version of the original game that retains the fast and addictive arcade driving but loses a lot of its graphical polish. If you’re willing to overlook some blurry visuals and get down to the serious business of racing you’ll find that there’s still a lot to love here and, for a launch title, it’s an impressive first outing for racing games on PSVR.

If you’re willing to overlook some blurry visuals and get down to the serious business of racing you’ll find that there’s still a lot to love here and, for a launch title, it’s an impressive first outing for racing games on PSVR.