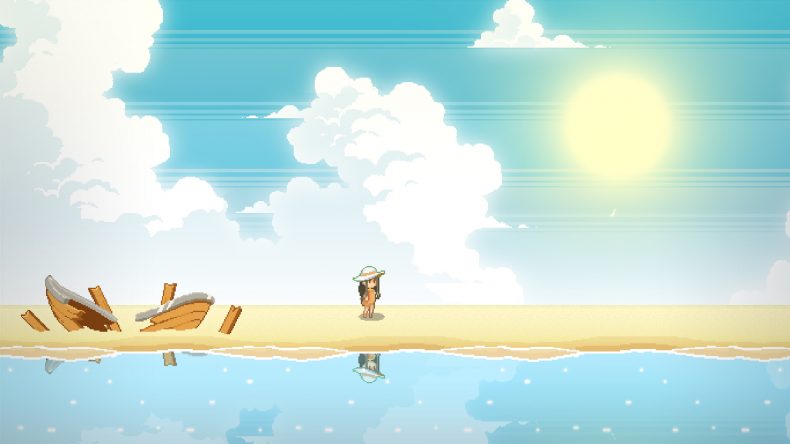 The humble puzzle platformer had its heyday in the early days of Xbox Live Arcade. There had been puzzles in platform games far before then of course (Super Mario Ghost Houses spring to mind) but they were never the focus of the adventure. The brain teasers of Braid, Limbo and Fez were a welcome change of pace, and led to some thought provoking gameplay. The nostalgia for this era of indie gaming really hit me when playing Evan’s Remains.

You play as Dysis, a girl tasked with finding missing young super genius, Evan. There are rumours of him being located on a deserted island full of ancient technology, and mega corporation Up-Link have mysteriously decided you’re the only one suited to the task. Upon arrival it soon becomes apparent that more is at play than you’re being told, and you’ll find out more between solving Monolith puzzles.

You’ll spend the bulk of your time in Evan’s Remains pondering platforming puzzles on the side of each of the island’s Monoliths. These are generally made up of platforms that once jumped on recede into the wall, and switches that swap which platforms are protruding. You’ll need to figure out which platforms need to be active for you to get over the final wall, and complete the puzzle. Once the game starts adding teleport pads, bounce pads and other unique platforms, the complexity really amps up. There isn’t any time pressure for the puzzles, no threats to avoid, and you can skip every puzzle if you get stuck and want to continue the story. This all adds up to a relaxing puzzle experience, and with no punishment for trial and error you can just play around with the platforms to see if an idea sparks. With the gentle soundtrack in the background, I found myself more than happy to ponder at my own pace. Investigation and experimentation is definitely rewarded when you’re presented with a new element to the monoliths.

The monoliths are full of ancient secrets, and in your adventure you’ll learn more about them, Evan, and meet a few other mysterious characters on the way.To be frank, I wasn’t necessarily expecting to be blown away by the story elements, but I was positively gripped from start to finish. The mystery of the missing young man, and the reasons you were chosen to find him is incredibly intriguing. There are plot twists throughout, and on multiple occasions my jaw hit the floor. There are narrative threads of family and loss alongside the secrecy, and the story takes some touching and even tragic turns.

Evan’s Remains really respects that a player can decide what they want from the game. If you want an almost visual novel experience, every puzzle is skippable. If you want to focus on puzzles alone, every section of dialogue can be fast forwarded. Alongside the accessibility to choose what to play, controlling Dysis for the platforming is incredibly easy. Dysis has a huge floaty jump, and maneuvering her where you’d like to go is very simple. The monoliths are more puzzles you jump around, and not jumping puzzles. The pixel art is incredibly detailed, with small details like Dysis’ hair swaying and the dirt she kicks up when walking fully realised. The backgrounds are delightfully varied as you saunter around the different areas of the island, with natural and man-made areas showcasing an equal amount of beauty.

There’s very little to complain about when it comes to Evan’s Remains, though I would certainly have enjoyed a few more challenging puzzles. Toward the end they certainly become more complex, but I rarely found myself struggling for more than a couple of minutes. The game also ended sooner than I’d have liked it too, at just under 3 hours. This isn’t necessarily a negative, but I’d have loved to spend more time in this world.

Evan’s Remains is a laid back puzzle platformer, with an exceptionally enjoyable story to tell. The twists and turns in the tale had me hooked for the duration, and I never wanted to look away from the charming visuals. The puzzles never quite hit the highest level of challenge, but for a slow-paced and emotional afternoon of gaming there are few options more enthralling than Evan’s Remains.

An easy going puzzle platformer, with a dramatic and emotional story. Evan's Remains is enjoyable from start to finish, with plenty of options to skip content you're struggling with.