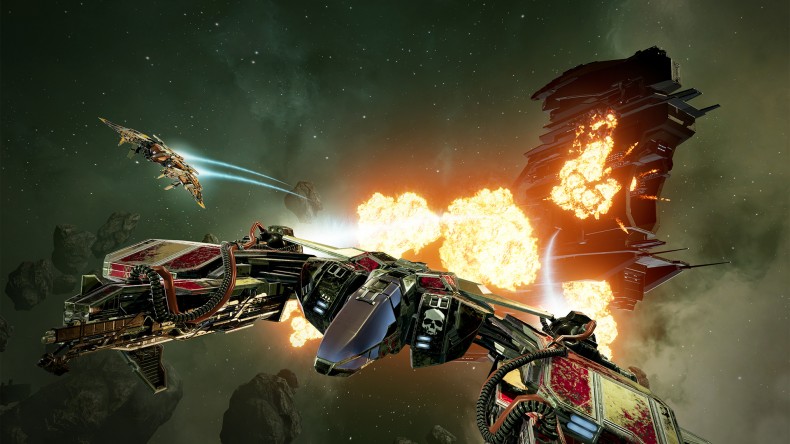 Battles in Eve Valkyrie begin in the dark. Deep in the bowels of a carrier ship you wait in the pitch black silence of your cockpit, anticipating the fight to come. Then, lights. Your ship’s systems begin to come online one by one. Cockpit lights and displays fire up. The blackness outside your craft is illuminated intermittently by the sparks of machinery springing to life. “Magnetic catapult initialised”. Red and white lights strobe down the floor and walls of the tunnel ahead as giant bay doors slowly open to the wail of sirens. “3,2,1…” Your ship shudders to life, lifting out of its holdings as smoke billows out from its sides; you shoot forward, catapulted violently at top speed towards the exit, lurching sickeningly from side to side as you’re jettisoned into 360 degrees of beautiful virtual space.

Eve Valkyrie is immediately technically impressive, its ship launching sequence easily the most impressive thing I’ve experienced so far on PSVR. Sitting in your sumptuously detailed ship cockpit, it’s easy to become overwhelmed with excitement as you first take the controls of your spacecraft and realise that you’re actually piloting this thing! You can move freely, barrel-roll and look all around you in this amazingly well-realised space battlefield. This is the immersive power of VR adding a whole new level of intensity and immersion to a well-worn genre. Originally released for PC, developer CCP has done an amazing job transferring the full quality of the Oculus Rift version to the less powerful PSVR without any noticeable downgrade in graphics or performance. Indeed, of all the PSVR titles I’ve played so far, this is easily the most aesthetically pleasing. Within minutes of booting Eve Valkyrie up you’ll be taking part in fast-paced space dogfights, twisting and turning, boosting and braking through asteroid belts, picking your routes at breakneck speed as you wind your ship in and around floating junkyards and the remains of war fleets. This is the closest you’ve ever come to experiencing actual space combat and, if you’ve jumped into PSVR early doors, it’s exactly the kind of experience you’ll have been praying for.

However, beyond the spectacle, beyond the thrill and novelty provided by VR, Eve Valkyrie is actually a little bit of a pedestrian affair.

Three multiplayer game modes, Team Deathmatch, Control and Carrier Assault, take place across a handful of very pretty, but ultimately samey, maps. These are rounded out by a useful training mode, wave attack mode and Chronicles, a very slight single player element that boils down to little more than flying around the multiplayer maps alone, listening to recorded “echoes” and collecting salvage. For the £60 asking price there isn’t actually a great deal of content on offer here as things stand. There is a story though, as you’d expect from an offshoot of something as rich as the Eve universe. You’re a clone, a talented pilot, resurrected to serve the ends of Valkyrie. Death is no more than a temporary setback, a lesson to be learned from as each time you die you’re simply uploaded into another body and flung back into battle a little wiser. It’s a narrative that’s added to by collecting echoes in the Chronicles mode, but really is little more than a clever device to explain the constant respawning.

As well as a lack of interesting or original multiplayer modes and an extremely spartan single player offering, the fact is that the gameplay does become repetitive very quickly. Once you’ve played a single round of each of the modes on offer you’ve pretty much seen it all. If you’re a fan of this type of arcade space dogfighting you’ll find plenty to love here, but if not you may find yourself moving on pretty quickly.

However, as I’ve mentioned, what is here is beautifully presented, from the wonderful head-tracked menus, narration by Battlestar Galactica’s Katie Sackhoff and visuals which see none of the blurry, muddy textures or jagged edges abundant in other PSVR launch titles, Eve Valkyrie oozes quality, and, as slight and repetitive as it may be, the gameplay is immediately enjoyable with accessible and responsive arcade controls. Of the three multiplayer modes, Carrier Assault is easily the highlight. Two teams are tasked with engaging in a three part offensive on each other’s carrier ships. Control points must be captured by each side in order to lower carrier shields, enabling players to get in and destroy cooling nodes which are located perilously close to your enemy’s turret defences. Once enough cooling nodes have been destroyed the carrier’s core will be exposed, affording attacking players the opportunity to indulge in a little bit of Star Wars roleplaying as you guide your fighter on a trench-like run to inflict damage on the enemy core. It’s pretty thrilling stuff and having objectives to fulfil adds much needed purpose to the repetitive gameplay.

There are three ship classes, two of which will take a little getting used to, adding more depth to proceedings. Fighters are rookie-friendly craft consisting of Gatling guns, head-tracked missiles and countermeasures, while the heavy and support classes use flak cannons, short warp jumps and buff beams to both control areas of space and provide healing and support to teammates.

The head-tracked weapons are a revelation, fun to use and adding an ability which will be fully taken advantage of by more talented pilots. Shooting in one direction with your main guns while locking on and destroying targets with your face is a unique and exciting way to control things, even if it did lead to me becoming completely disorientated and smashing into asteroids and the sides of enemy carrier ships on occasion. With the three different classes of ship on offer, as well as the generous amount of unlockable ships and aesthetic content which you can very slowly grind away for, there’s plenty to keep you busy if this type of thing is your bag, but it doesn’t stop things getting old too quickly for the rest of us. It’s also a massive shame that, with the tactical elements offered by the various types of craft and the fact that every player is mic-ready through their headsets and PS cameras, voice comms can only be activated if players go to the trouble of creating squads. It’s an odd decision which has left almost every game I’ve played completely bereft of team chatter and works completely against the application of teamwork during battles; something that would really have help inject a little more life into proceedings.

It should also be mentioned that microtransactions raise their ugly heads here and even though you’ve just shelled out £60 for the game, other players can get the jump on you, eschewing the slow crawl through unlockable gear by stumping up actual Earth cash to quickly gain access to more powerful ships. It’s a pity they are included here but I’m also not sure how much it actually affects gameplay as I found myself topping team scoreboards in my low-level craft on several occasions.

Overall then, Eve Valkyrie is a technically marvellous game – it’s the best looking title on PSVR and it has provided me with my favourite VR moment thus far, blasting out of the belly of a carrier ship at breakneck speed into beautiful, deadly space. However, the spectacle only thrills for so long and at its heart Valkyrie is a straightforward, arcade shooter which lacks enough variety in its gameplay to stop it growing stale quite quickly, and, for the asking price, it’s perhaps only fully recommendable to the most enthusiastic of space pirates.

At its heart Valkyrie is a straightforward, arcade shooter which lacks enough variety in its gameplay to stop it growing stale quite quickly, and, for the asking price, it’s perhaps only fully recommendable to the most enthusiastic of space pirates.