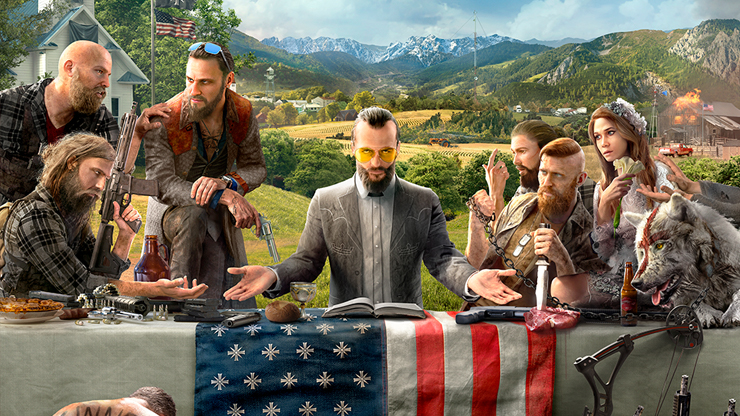 It’s been a while since I’ve played something as constantly chaotic as Far Cry 5. There’s a lot of shooting, a lot of mayhem, and a lot of Peggies. What’s that, you ask? It’s one of Joseph Seed’s followers, hellbent on blowing you to kingdom come by any means necessary. Whether you’re driving to the next checkpoint, wandering around in the open, or chilling in the Fall’s End arcade, there are few places you can go to entirely escape the action. I love the gameplay here, especially when you’re in a plane chasing down a convoy or heading into an outpost to gun down part of Seed’s flock. It can be a bit much sometimes, and even though it can be a whole lot of fun, the consistency of each threat on your life is overbearing at times. That said, in the moments of solitude you can’t wait to get back into the thick of the action. It’s a special kind of burden, believe me.

I’m going to go on record here to say it’s one of the best of 2018 so far, and the best Far Cry game I’ve played. It’s a typical Ubisoft game in many ways, but it’s a stripped back Far Cry, and that’s a good thing. There’re no radio towers (well, there’s only a few, with one including the Ubisoft’s nod to our frustrations with them), the maps aren’t massively overpopulated with things to do, and side quests to take on, hunting is only used as a tool to sell the items you scavenge, and the story doesn’t take a backseat. Joseph Seed is a fascinating villain, surpassing the insane Vaas from Far Cry 3, bringing a layered and troubled character to the masses. His family are equally interesting, as is the world of Hope County. It’s a wonderful place to explore, and there are some fantastic locations to visit. The map is separated into three parts with each one under the control of Joseph’s siblings. John Seed oversees Holland Valley, Jacob is up north in Whitetail Mountains, and Faith takes care of Henbane River. Each character is superbly written: John relies on the word of God and the power of the word “yes”; Faith uses Bliss (a drug that causes hallucinations) to manipulate and confuse; whilst Jacob is a war veteran that forces you into battle and pushes you to the limit.

You can take on the regions one at a time, or flit from one to another and complete the story missions out of sequence. There’s a certain level of structure, but you’re much freer to explore and undertake them whenever you want. With a story so dark, many were worried that it would lose significance, focus, and impact, but throughout each of the three locations, you become dazed and end up being transported to an interaction with each of the siblings that involves a certain mission. Faith tries to turn you to the cult, Jacob will put you in a time-based battle, and John tries to get you to confess your sins, followed by a tricky escape. These encounters add plenty of depth to the story, and remind you just how twisted this family is between all the gunfire and destruction.

The game is made up of story quests, along with Outposts to liberate, civilians to save, Shrines and Silos to blow up, and more. There’s lots to do, but not too much to feel overwhelming. Each one has you do something different, whether that be taking to the skies in a plane to destroy a convoy, driving around in a beast of a vehicle to wipe out Peggies, or unlocking one of the 9 Guns for Hire. These include the likes of Nick Rye – an expect in the sky, Hurk Drubman JR. – an Alan from the Hangover type character, and Sharky Boshaw – a pyromaniac with a penchant for Disco Inferno. These missions bring some of the humour to an otherwise dark tale, and they are a pleasant parallel to the otherwise darker tones. Another part of these extra quests includes Prepper Stashes. These are caches that require you to solve a type of riddle to find, and once located they hold plenty of cash, ammo, and craftable items. Almost every quest gives you Resistance Points, and once you’ve reached the maximum number of Resistance Points for that area, you get to take on one of the three siblings. One of the newer features is fishing, and it’s surprisingly fun, giving you something extra to do whilst exploring the gorgeous world of Hope County.

It can be easy to get to the different locations with the right vehicle, and thankfully there’re plenty to choose from. Helicopters, seaplanes, trucks, and cars can all be unlocked and bought. I often chose the same helicopter for most missions, but you can’t just spawn them anywhere. Strongholds have spawn points and shops, and liberating outposts can become bases for the Resistance. With this, spawn points for all vehicles come with them, along with shops for you to buy new weapons, ammo, and outfits, along with consumables like medkits.

There are some great weapons you can buy, and custom weapons from fallen foes can be unlocked once you defeat them, but for the most part I stuck with the same sniper rifle and semi-automatic. Enemies are easy to kill, with the occasional heavy taking a bit longer to down. This is great because you never struggle massively but the further in to a region’s story you get, the concentration of enemies get higher, as do their airplanes and helicopters. There is plenty of freedom to how you go about your way. The more damage and chaos you cause, the more you’ll find the enemies come for you. You could drive around Hope County and every enemy will come for you, but if you take them out stealthily, less noise is created, and you won’t be in as much conflict. It’s a smart mechanic, and one you can manipulate to make things easier for yourself. The thing is, you’ll just want to blow shit up because it’s so damn great. Rocket launchers, remote explosives, and dynamite do loads of damage, and firing on enemy outposts with rockets decimates them. You could go in and take them down by snapping their neck, but where’s the fun in that?

Far Cry 5 is a blast, with a great story that always hammers home the reason why you’re there, doing the things you’re doing. The ending has just as much impact as the journey, and Joseph Seed and his three siblings are the best written characters Ubisoft has ever featured in a Far Cry game. Many may feel the constant chaos is a bit much at times, but there is peace amongst the violence. Some may miss hunting being such a big part, but instead of doing it for crafting purposes, you do it mainly to sell at shops for more money. It isn’t necessary for progression, so it feels better to do in your own time.

There is a Perks menu, and there’re plenty of great attributes and tools to unlock. You can get a parachute early on, or a wingsuit. The repair torch allows you to repair any vehicle, or you can improve your health, proficiency with weapons, or how efficient your stealth is. There’s plenty to focus on, and again, your freedom to play around remains until the end. There’re certain challenges you complete by using certain weapons or killing specific animals, and each one provides you with more Perk points, so along with earning them in other ways you end up with a fair few. Co-op is magnificent, and I had hours of fun playing through the game this way, too. The only issue is a lack of progression if you join a friend’s game. Say you complete three story missions together, those missions still need to be completed when you head back into your own game. You do get to keep any money or perk points, but an option to have progression carry over would’ve been nice. Far Cry Arcade is another element to Far Cry 5’s online features. In it, you can create your own maps or play through others, eventually including content from other Ubi titles like Assassin’s Creed and Watch Dogs. There’s not a lot there now, but after release I’m sure this will have heaps of potential.

The music is another outstanding element, whether it’s the orchestral score by Mark Yaeger, or the hymns written by Dan Romer that tell the story of Joseph and the cult. There’re also tons of licensed music by bands like Eels, The Vines, and T-Rex. Some missions even have songs play to accompany them, and they add much more excitement. One of the missions is called Get Free, and when that kicks in, I was in my element.

I love Far Cry 5, and I’ll keep on playing to finish every side-quest I missed, then I’ll be back for the DLC. It’s one of those games where you don’t want the story to end because of how gripping it is, while the supporting cast of characters is a great mix of troubled, bizarre, and amusing folks. Oh, there’s a bear called Cheeseburger that can become one of the Fangs for Hire. This game has it all, and it’s never boring, regardless of the time spent with it.

The best Far Cry yet, with well written characters, lots of freedom to play how you want, and a lot of fun to be had on your own or with a friend.